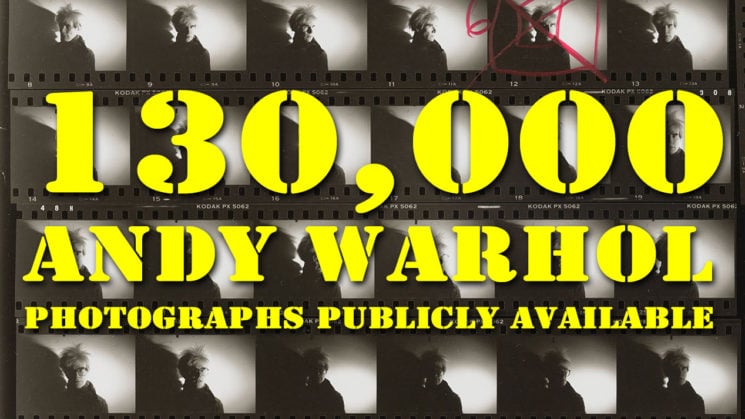 Andy Warhol was an often controversial and divisive figure in the art world. But whether you love him, hate him, or are indifferent, his work is certainly interesting, even if only for the response it elicits. Personally, I find his photography particularly intriguing.

The Cantor Arts Centre and Stanford Libraries today have announced that they’ve put a massive selection of Warhol’s photographs online and made them publicly available to view. How massive? Well, 3,600 contact sheets totalling around 130,000 images covering everything from backstage celebrity parties to street photography.

The images show Warhol’s view of the world through his 35mm camera, which they say he took with him everywhere during the last decade of his life. Stanford says that this the most complete collection of the Warhol’s black and white photography ever made available to the public.

This remarkable archive will be available to researchers, academics and Warhol fans all over the world. Stanford University’s commitment to making this material available will advance scholarship on Warhol’s less-studied photographic work and will contribute to a deeper understanding of the role photography played in the artist’s development

It’s an interesting look into how Warhol saw the world, and the access he had to celebrities shows a unique insight into some of the more personal moments of their lives. Whether it’s a young Ian McKellan (long before he became Sir Ian) drinking backstage at the ballet, Oprah Winfrey & Grace Jones at Arnold Schwarzenegger and Maria Shriver’s wedding, or street scenes of late 70s and early 80s New York, there’s plenty here to see and study.

It’s interesting to see the multiple shots taken of some scenes and people. Trying different angles until he saw what he wanted, or waiting for the right expression or attitude. But what’s particularly fascinating is how unbothered people looked back then about being in front of the camera. Even for those who weren’t celebrities that dealt with the camera almost daily. But even with the celebrities, there are many unguarded moments caught on Warhol’s camera.

If you want to read more about the collection, check out Stanford News, and you can view the entire collection of contact sheets here. If you’d prefer to browse by category, see the Warhol Spotlight. For enlarged views of all 130,000 negatives, see the Cantor Collection website.