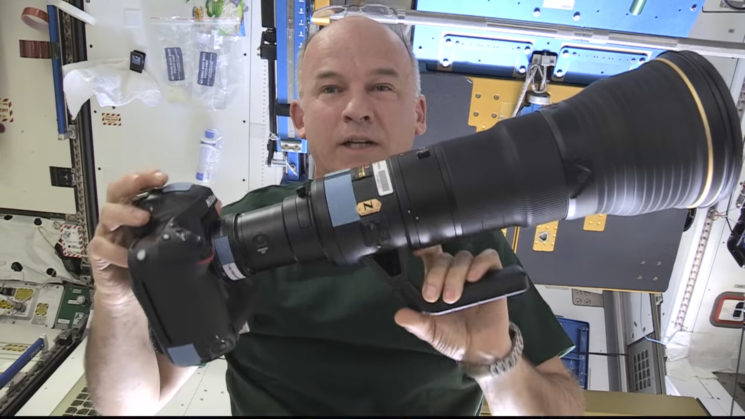 The International Space Station holds a whole lot of camera gear. Especially Nikon camera gear, as a recent tweet from astronaut Alexander Gerst illustrates while cutting the hair of fellow astronaut Sergey Prokopyev. Behind them are two walls filled with various camera equipment. But have you ever wondered how much it costs to actually send it up there?

When the tweet was posted to Reddit, user ultrahello mentioned that it costs around $10,000 per pound to deliver items to the International Space Station. This means that the kit in the photo above, a Nikon D5 and 800mm f/5.6E lens with 1.4x teleconverter, weighing a little over 13lbs will have cost at least $130K to send up.

The $10,000/lb figure comes from a report by Business Insider a couple of years ago. Essentially, a $500 million cost per launch divided by the 50,000lbs of stuff that it can carry. NASA has also published this figure on their website, too. And that’s a low end figure, too. The cost today may be as high as $43,000 per pound depending on who actually flew it up.

NASA has contracted both SpaceX and their competitor Orbital Sciences since ending their own shuttle missions in 2011. One of the goals of projects like SpaceX and Orbital Sciences is to get this figure lower, which is one of the reasons why the Falcon Heavy was such a big deal. And why blasting a Tesla into space really wasn’t that big of an expense.

That means that the 10 Nikon D5 bodies sent up last November would’ve also cost at least $300,000 to deliver with each camera, battery and 2x XQD combo weighing in at just over 3lbs. And that number is potentially as high as $1.3 million to deliver those cameras if Orbital Sciences delivered it.

In the recent tweet above, you can see just a small chunk of the kit on the walls behind Alexander and Sergey. The kit itself is already quite pricey, but the delivery costs are just astronomical (no pun intended).

Side note: In case you were wondering, this is how they cut hair on the ISS.

I’ll never complain about Royal Mail’s shipping costs again. Although I will still moan about their delivery times.