New start up, Staaker, has just released their auto-follow action drone for preorder. Most of today’s drones are designed to be flown manually with remotes. Staaker, though, see things differently.

Gone is the traditional remote control and the FPV headset. No longer do you need a dedicated drone operator to record your extreme antics. This one just follows you around wherever you go.

Follow mode isn’t exactly new. The Phantom 4, Yuneec Typhoon and plenty of others have had it for a while. No other drone seems to have been based around this feature, though.

The standard remote control has been replaced by an armband. From here you can change the various modes in which the drone operates. This eliminates the need for a separate person to control the drone. So, you can basically become a one man action camera band. 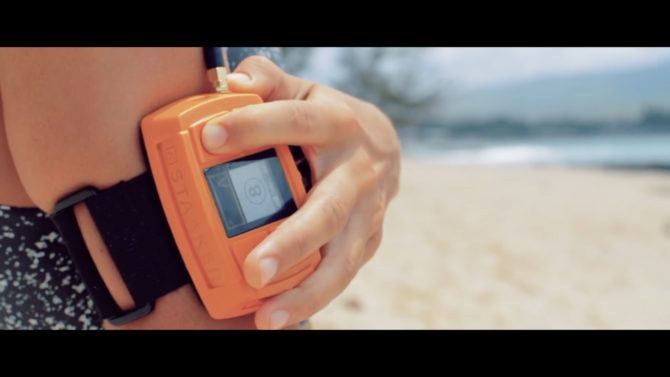 The drone has five different modes of operation, with four of them being follow modes.

Firstly, the standard follow mode that we’ve come to know and love from drones so far. The Staaker will move dynamically and follow you from behind.

Here, the Staaker circles around you whether you’re moving or standing still. This could make for some very interesting and dynamic footage. I don’t know how much control you’d get over the speed at which it circles you, though.

I think this could be my favourite of the follow modes. It certainly seems to produce the most cinematic footage.

In this mode, the drone follows you from a compass direction and angle of your choosing. This could be very handy if you want to pre-set your drone to catch you coming up over a ridge, for example.

It could also be useful to ensure that the camera always sits perpendicular to the direction of your travel.

In this mode, the Staaker holds a fixed position and rotates to follow you. I could imagine several drones parked at different sections along a race covering riders as they pass through checkpoints.

It could also work well for a nice panning shot when positioned closer to the subject’s height.

Finally, we have the full manual remote control mode. Instead of using a standard remote control unit, though, we use the armband to determine its flight.

As well as the obvious benefits of filming yourself solo, the Staaker is also weatherproof. It’s designed and tested to fly in rain snow and wind up to 20mph (30kmh). So, it’s clear that this drone is aimed at action.

The Staaker has a flight time of up to 30 minutes, and the battery can apparently be switched out in just a few seconds. It’s also compatible with GoPro Hero 3, 3+ and 4 models of camera and features a 3 axis 3D gimbal stabiliser.

It is important to mention, however, that there is no obstacle avoidance built into the Staaker. The company do say they’re working on it, but for now, if something pops up in your drone’s path, you’ll have to grab your armband and hit the pause button.

This is something easier said than done, however, if you’re halfway down a mountain on a bike. I do wonder if this lack of instant response is compatible with the new FAA regulations.

It does look quite interesting, though. I can’t think of any other drone that offers so many different automated ways of following a subject. It would be great to get my hands on one and see how they perform in the real world.

You can find out more about the Staaker on their website, where it is currently on pre-order for $1,195. Once the pre-order session is over, the regular retail price will be $1,795. Shipping is expected to start in December 2016.

Will this be compatible with the various laws around the world? Does the lack of obstacle avoidance put you off getting one? Do you think this is the new way and more drones will follow suit? Let us know your thoughts in the comments.

No drone? This is how to fake aerial shots with your phone