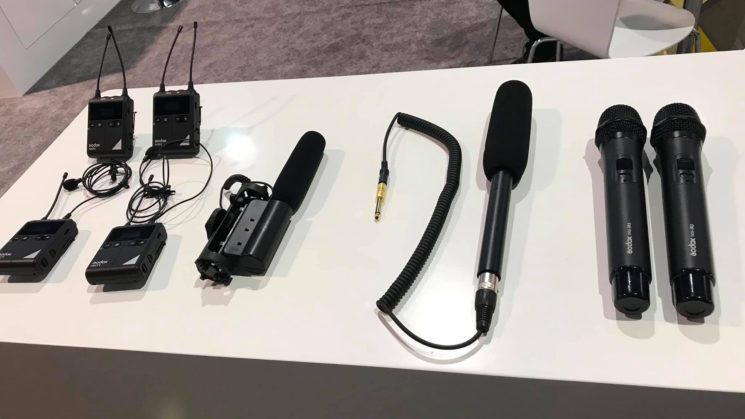 Up until now, Godox has primarily been known for its rather popular range of flashes and continuous LED lights. Now it seems that they’re expanding out to cover other aspects of the creative arena, as they’re showing off a range of Godox branded microphones right now at CES 2020 in Las Vegas.

They were spotted on the counter at the Godox stand by Anthony Schaller and posted into the Godox User Group on Facebook. There have been no official product announcements yet, nor pricing, and we’re told there won’t be for a while, but it looks like a decent variety to kick things off. 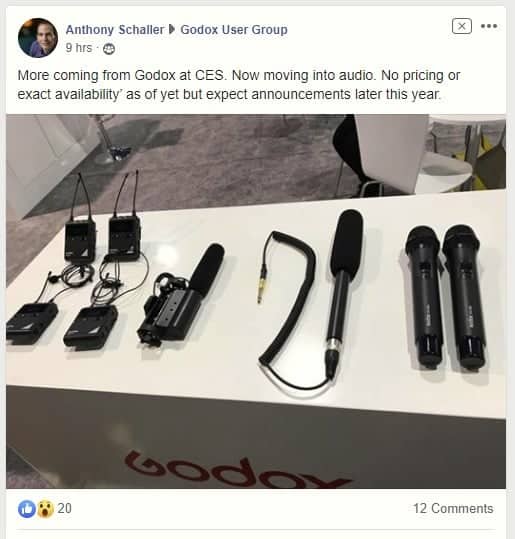 Looking at the variety on the table, we see wireless lav mics, a (presumably) powered on-camera microphone, a shotgun microphone and a couple of dynamic mics (which also look like they might potentially be wireless).

From some of the model numbers we can see, the Godox AWT1 and AWR1 are the transmitter and receiver pair for the wireless lavs, with the dynamic mics being the WM-IR3. The on-camera microphone does appear to have some markings on it, but they’re difficult to make out in the photo.

The shotgun mic shows nothing obvious at all. Although it’s interesting that it’s got an XLR to 6.5mm mono audio plug on the end. This suggests that it might have its own internal power source and won’t require 48v phantom power supplied by a recorder. Like most battery-powered shotgun microphones, though, I would guess that the option to phantom power it is still there, as it generally leads to a cleaner signal than powering via an internal battery.

As mentioned, there’s no official announcement yet, but it’s quite exciting to see Godox breaking into completely new territory. I’ll be following this one closely.

We’ll keep you posted as we hear more!

Photos show Profoto is expanding their range with first ever speedlight

« This photographer creates complex portraits painted with light
This incredible image of the moon at the start of 2020 is a blend of 100,000 photos »