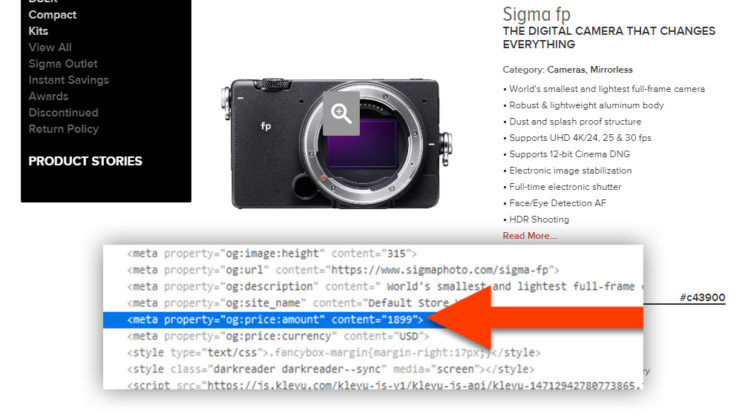 There’s something to be said for rooting around in the HTML source of manufacturer websites when new product pages pop up. And certainly there seems to be something to it when it comes to Sigma. One eagle-eyed Redditor by the name of jadware spotted that there was a $1,899 price tag embedded right in the HTML source for the product page on the Sigma website, despite not being shown on the page visibly.

Since being posted to Reddit, the price of the camera appears to have been erased from the HTML source of the Sigma fp listing on the Sigma website. The previous “1899” figure now simply reads “0”. But, thanks to another Redditor, ForwardTwo, screenshots are forever. 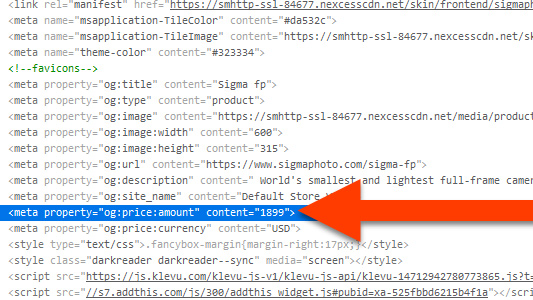 If the price is indeed accurate, and I’ve no doubt that it is, that’s quite a substantial price difference over their previous camera models. Including their flagship Sigma SD Quattro H. Of course, this is their first full-frame Bayer sensor mirrorless camera, their first attempt at decent video, and it’s going into an existing lens ecosystem. So, they don’t need to use price as a selling point as much as they did with the SA mount bodies to try and attract new customers.

While the existence of the Sigma fp was announced back in July, exact availability has not yet been announced. That being said, they’re expected to release the camera around October 20th, during PPE 2019. We’ll be at PPE, so we’ll be sure to swing by the Sigma stand and take a look in person.

« Spice up your fall photography with glowing mushrooms: here’s how to shoot and edit them
Photographer shot nine times by three teens who asked him for a photo »