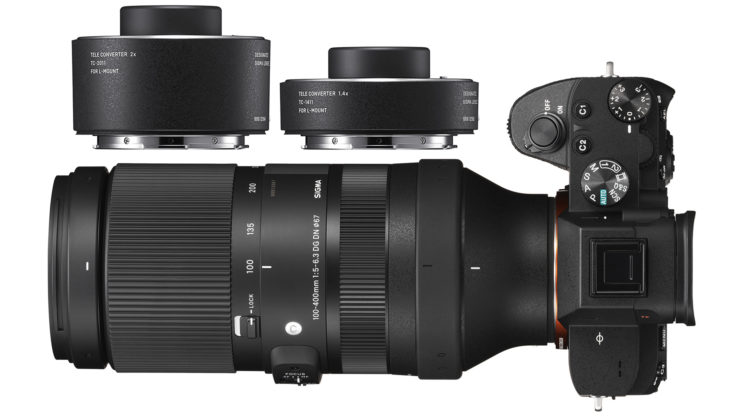 They’ve also announced two new 1.4x and 2.0x teleconverters for the L mount, too. As well as a new UD-11 USB dock available in L mount and Canon EF-M mount flavours for updating your firmware and customising lens settings.

The new lens isn’t quite as inexpensive as Sigma’s 100-400mm f/5-6.3 for DSLRs, which currently retail for around $799, but it does work out cheaper than buying the Canon EF version with the MC-11 to adapt it to your Sony or MC-21 for your L mount camera – and probably faster, too.

It features up to four stops of optical image stabilisation to help reduce the appearance of camera shake while shooting handheld. It has an integrated stepper motor for fast and quiet autofocus, with an integrated AFL button that can be configured to perform a number of tasks. It is also compatible with the two new teleconverters mentioned below.

Sigma has also announced new TC-1411 and TC-2011 teleconverters for the L mount camera system. These aren’t the first teleconverters for L mount, as Panasonic released a couple last year. Although the Sigma ones do appear to be quite significantly less expensive, with the Panasonics coming in at close to $600 while the Sigma 1.4x and 2.0x are $399 and $429 respectively.

As to how their performance and image quality compares to the Panasonics, and if the Panasonic teleconverters are still worth paying a premium is unknown, but I’m sure once these become available, we’ll start to see some side-by-side comparisons.

The Sigma USB docks have traditionally been used primarily for fine-tuning your autofocus with DSLR lenses, and we haven’t really needed them for mirrorless cameras. But that is not all they do. They also allow you to upgrade the firmware of your lens and even tweak the settings to adjust things like your autofocus speed and other settings.

The new Sigma UD-11 USB Dock comes in two different mirrorless system options. One is for the L mount and other for Canon EF-M. Both the L mount and Canon EF-M versions are available to pre-order now for $59. Both are expected to start shipping on July 10th.