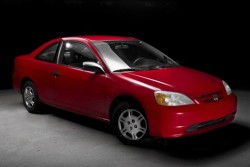 There are lots of ways to use a large scrim, you can use it to create partial shade, reflect natural light, or fire strobes into it (from either side) for a diffused light source.

When your subject matter is really big – like say a car – you need a really big scrim if you want to create a large soft light source. Large scrims and frames can run into some serious money. This is still relevant if you shot with a Specialized Car Rig.

This guy did just that to shoot some random cars. (by this guy I mean Roberto Bigano, and by random cars I mean some Bugatti‘s)

I watched that video and immediately thought to myself that I could build such a thing, cheaply and come at least close to achieving the same result. To be fair, most of my DIY projects leave me with a deeper understanding of why a Pro photographer invests in Pro equipment, I didnt expect this to be much different but I wanted to at least see if it was possible.

The hardware store sells ½ steel (galvanized) electrical conduit for about $2 per 5 foot length. They sell matching fittings for connecting the pipes, like re-useable compression fittings and 90 degree elbows.

I think my total outlay was about $30.

Result is a 10 foot by 15 foot rectangular frame. I used 5 foot lengths because I can take it all apart, pack it in the car and take it on location easily. I also tightened some fittings with wrenches to make them super firm, and sprayed them red to remind me which ones are “wrench tight”. This went a long way to reducing the time needed to assemble and take down the frame. 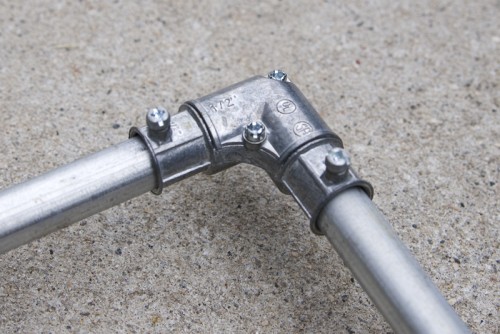 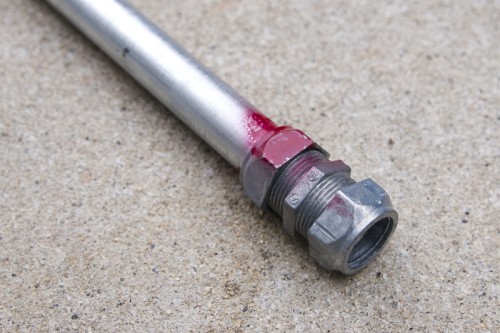 My advice now would be to use larger diameter tubing if possible since the small compression fittings are not very rigid. Even the pro frames in the video had some wire type supports in some parts of the video. Take care that the frame you make is rigid enough and well supported – you don’t want this to come down on a car!

I already had a 9 foot wide by 12 foot long piece of white muslin which I have used in the past as a backdrop. I think it was about $25 from a big fabric store. I don’t think you’ll get pieces wider than 9 feet wide but I could be wrong. If you know someone with a sewing machine you could always sew some pieces together if you need to go REALLY big. (if you know of a store that sells muslin wider than 9 feet, let us know in the comments)

All I needed to do was put some brass eyelets around the edges and bungee the fabric into the frame. The brass eyelets can be bought at a hardware store, or the fabric/hobby store. You punch a hole in the fabric and hammer the two halves together to make a brass grommet. I folded the edge of the fabric over to make it stronger which turned out to be important. Even with this measure one grommet ripped out from the pull of the bungee. Muslin is pretty weak material. 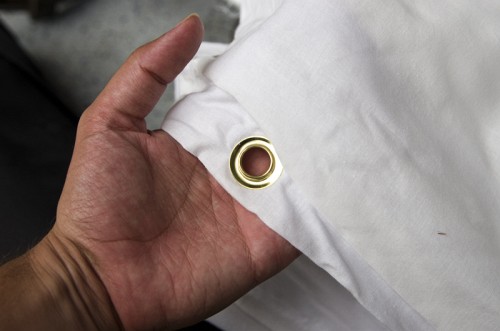 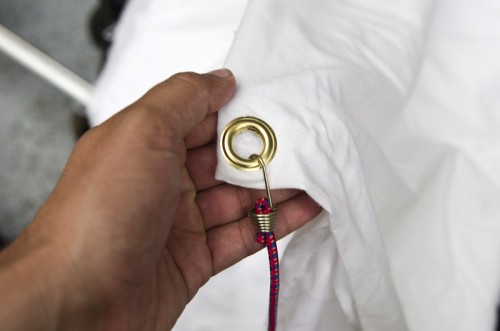 Then I used 3 lightstands and some Manfrotto clamps to hold the whole thing up. I didn’t have enough clamps myself so I enlisted a friend to come help and he brought the clamps. You could probably get away with some cheaper DIY clamps but the Manfrotto clamps are really sturdy and I wouldn’t want to risk this whole thing falling down.

3 stands was enough but 4 would be more secure. The problem with more lightstands is that you’ll need to do more cloning work later.

It should go without saying that this is not a project that will tolerate a windy day, you could use guy wires If needed but I could see this being a royal pain, and a bit dangerous on a breezy day. 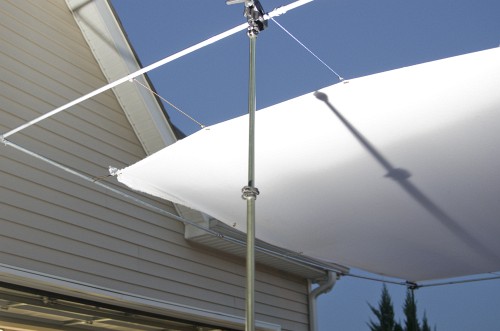 My friends daily driver was the subject, just to get a feel for the lighting, composition was limited by the space on my driveway and again I was really just exploring the idea of the scrim not trying to make a masterpiece. I put the camera on a tripod to make processing the multiple images much easier.

Lighting in my case was achieved with a mix of speedlights and a single Alienbee B800.

Basically all the lights I have. I dialed the power way up, used a fairly tight aperture (F9) to make the whole car sharp and set the shutter speed just below sync speed.

ISO controlled the exposure (in this case was 500, although the lights were not quite maxed out). The trick is to get the lighting even, and to try to hide the lights and stands so you don’t have as much cloning or copying to do in post.

I bounced the lights off the scrim, but if you have tall enough lightstands you could always shoot down onto the scrim like a giant shoot through, just be careful of spilled light. 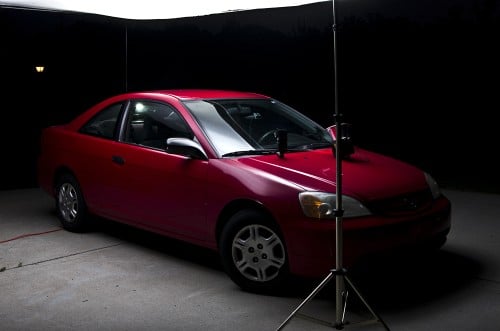 I made some extra shots with the lights in different locations to give me enough car to copy and clone and make a complete image. It turned out that directly overhead light was a bit to dramatic and didn’t give me enough light on the side of the car. I moved the scrim towards the camera so more light would hit the sides of the car. In my case I was pretty lazy, the weather was super hot and I just wanted to try it out quickly as a first attempt. Here is the final picture after post 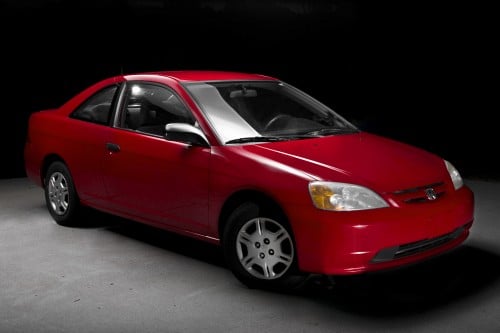 I had fun doing this project, will use it on car shoots in the future and will be sure to pack this in my lighting bag. I did find the results somewhat humbling, and will need to work on it some more to make the lighting more even and pleasing. Going even larger would make the lighting easier but the construction/support more difficult. I’m also keen to try this style of lighting without the scrim using a parking garage ceiling as the bounce surface. 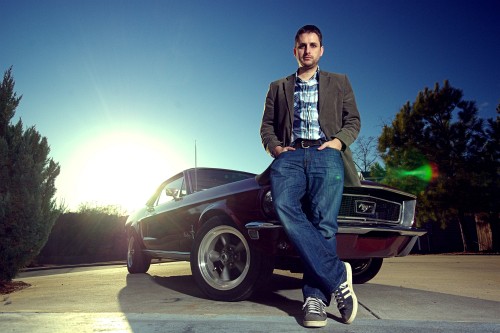 Phil Ball is an automotive photographer based in Senoia ,Georgia. Here is what he had to say: While I do shoot portraiture my main passion is automotive photography. It’s an intensely technical side of photography, requiring a mix of skills from lighting, rigging to post production. I don’t mind admitting that I am still on the steep part of the learning curve but it’s a lot of fun.

How to make a DIY Scrim Jim for less than $80