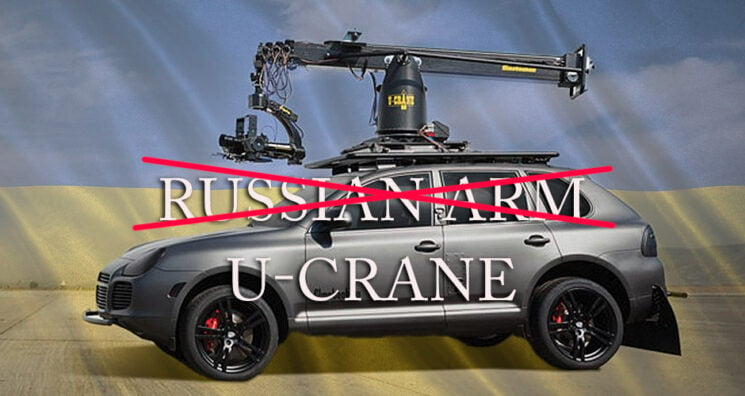 Filmotechnic has renamed their car-mounted crane “U-CRANE”. Formerly called the “Russian Arm”, the cranes are actually produced in Kyiv, Ukraine and the company decided it was time to honour their country of origin and show support against the ongoing war with Russia.

The cranes are a mainstay of Hollywood action movies. Used in productions with fast-moving car chases, the cranes have been a pivotal piece of equipment in movies such as the ‘Fast and Furious’ franchise, most of the Mission Impossible films, and of course, James Bond.

“The NEW OFFICIAL name of Filmotechnic’s world-famous system is now U-CRANE in honour of country of origin and their heroic fight against Russian aggression,” writes Filmotechnic in an Instagram post. “The gyro-stabilized crane system was designed and built-in Ukraine by Filmotechnic and will continue to be built in [Kyiv] for years to come!”

Filmotechnic has admitted that the current crisis has made production “difficult”, although they plan to continue to manufacture U-Cranes in Kyiv for as long as possible.

Filmotechnic has a payroll of about 250 people in Kyiv, the capital of Ukraine currently under attack. Kevin Descheemaeker, the company’s representative in the United States, said the system was no longer called “Russian Arm” to pay tribute to the company’s Ukrainian employees and to Filmotechnic’s owner, Ukrainian engineer Anatoliy Kokush, who designed and won an Oscar for this machine.

“As a group we consider U-CRANE to be a more respectful alternative,” said a spokesperson for FIlmotechnic.

This universal automotive crane can be mounted onto almost any vehicle