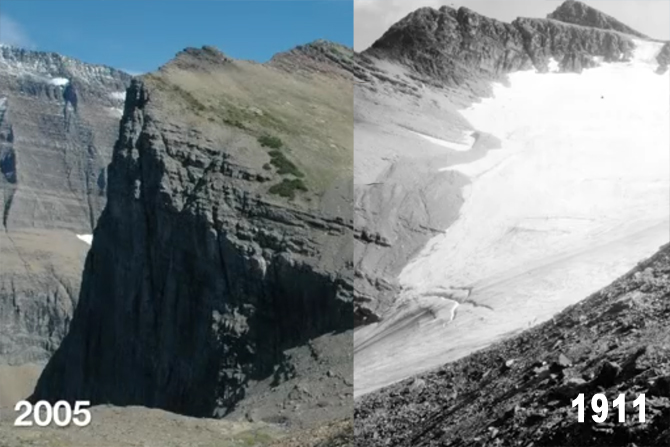 The glaciers at Glacier National Park are rapidly shrinking. In fact, they’re melting so fast that the glaciers that can be seen today represent just one-sixth of the number of the icy bodies that were in the same park just 150 years ago.

It is imperative that scientists measure glaciers and follow their changes, and this is exactly where repeat photography kicks in.

By going to the same spot where a photo was taken a long time ago and recreating the composition, scientists are able to quickly learn (and share) how the landscape has changed over time.

The results, unfortunately, are alarming. 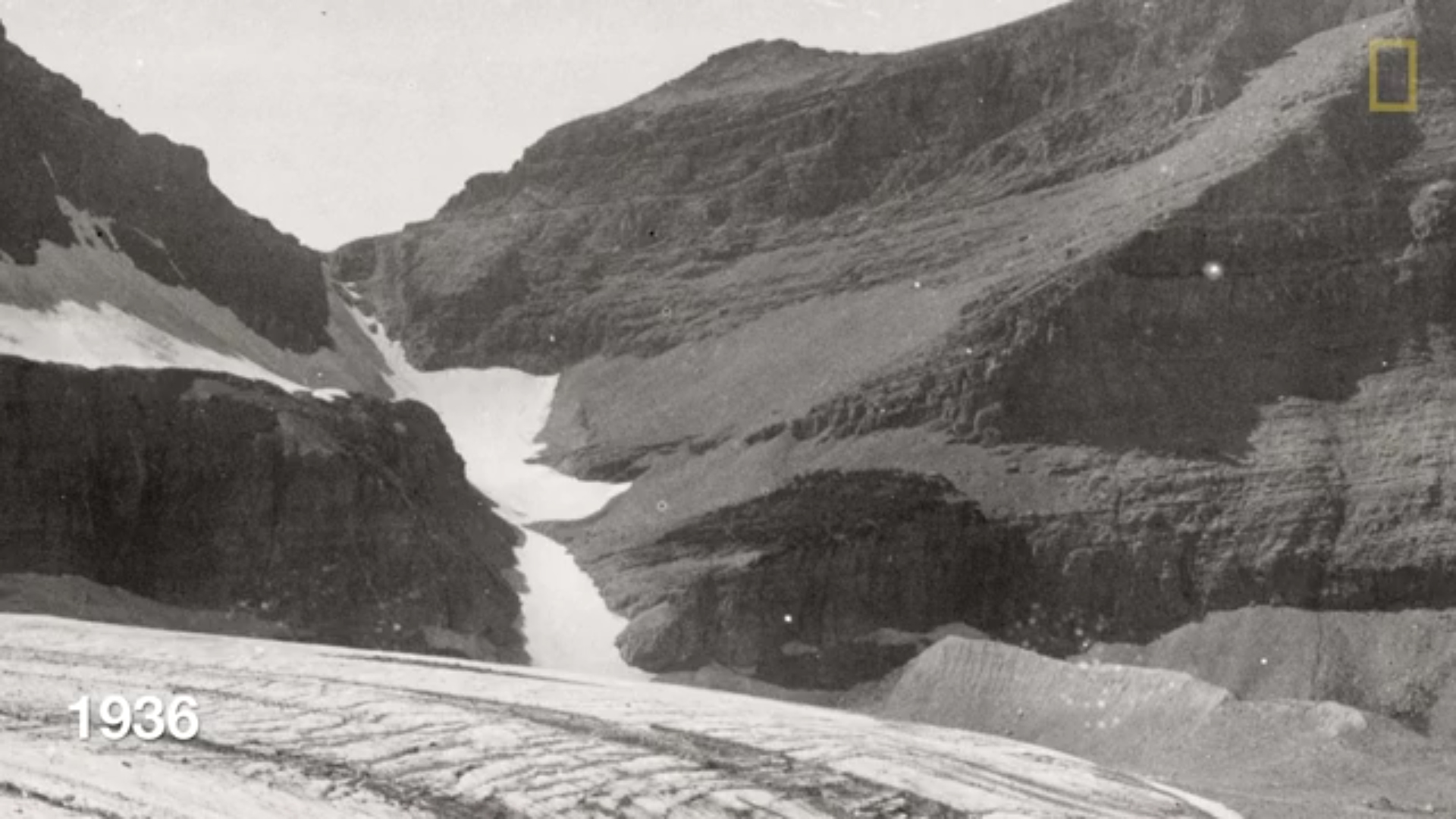 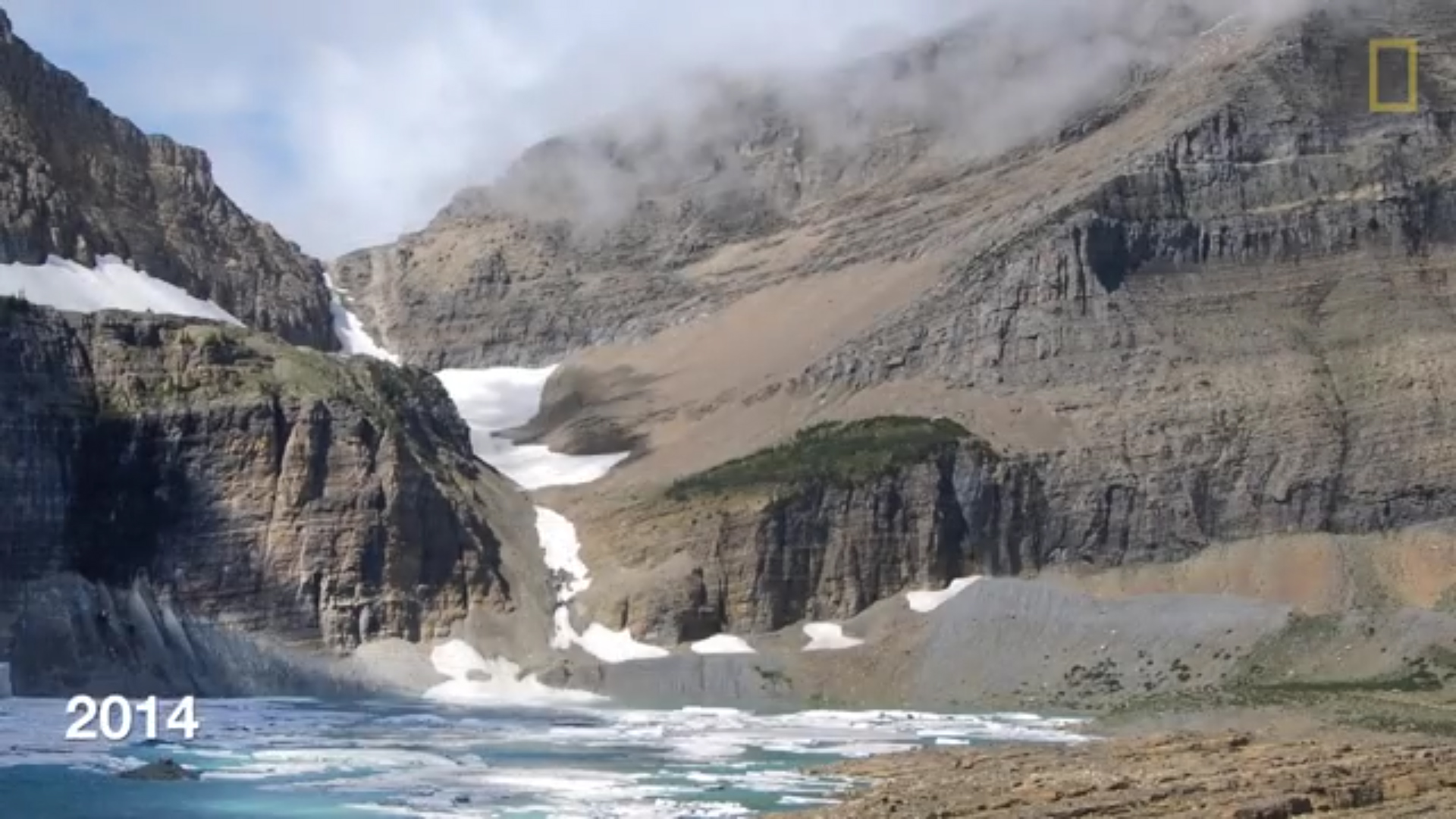 “In the mid-1800s,” National Geographic writes, “this Montana landscape was covered by 150 glaciers—today only 25 remain”.

U.S. Geological Survey scientists claiming that glaciers are shrinking and disappearing are backing their words with proof by recreating glacier photographs from the early 1900s.

Dan Fagre, a USGS research ecologist from the Northern Rocky Mountain Science Center, says the really big changes are seen when you visit the same spot and take a photo every 5-10 years. That being said, while the team initially thought that photographing the glaciers every other year would be pointless, the extreme glacier change now has them repeating photographs a lot more frequently. 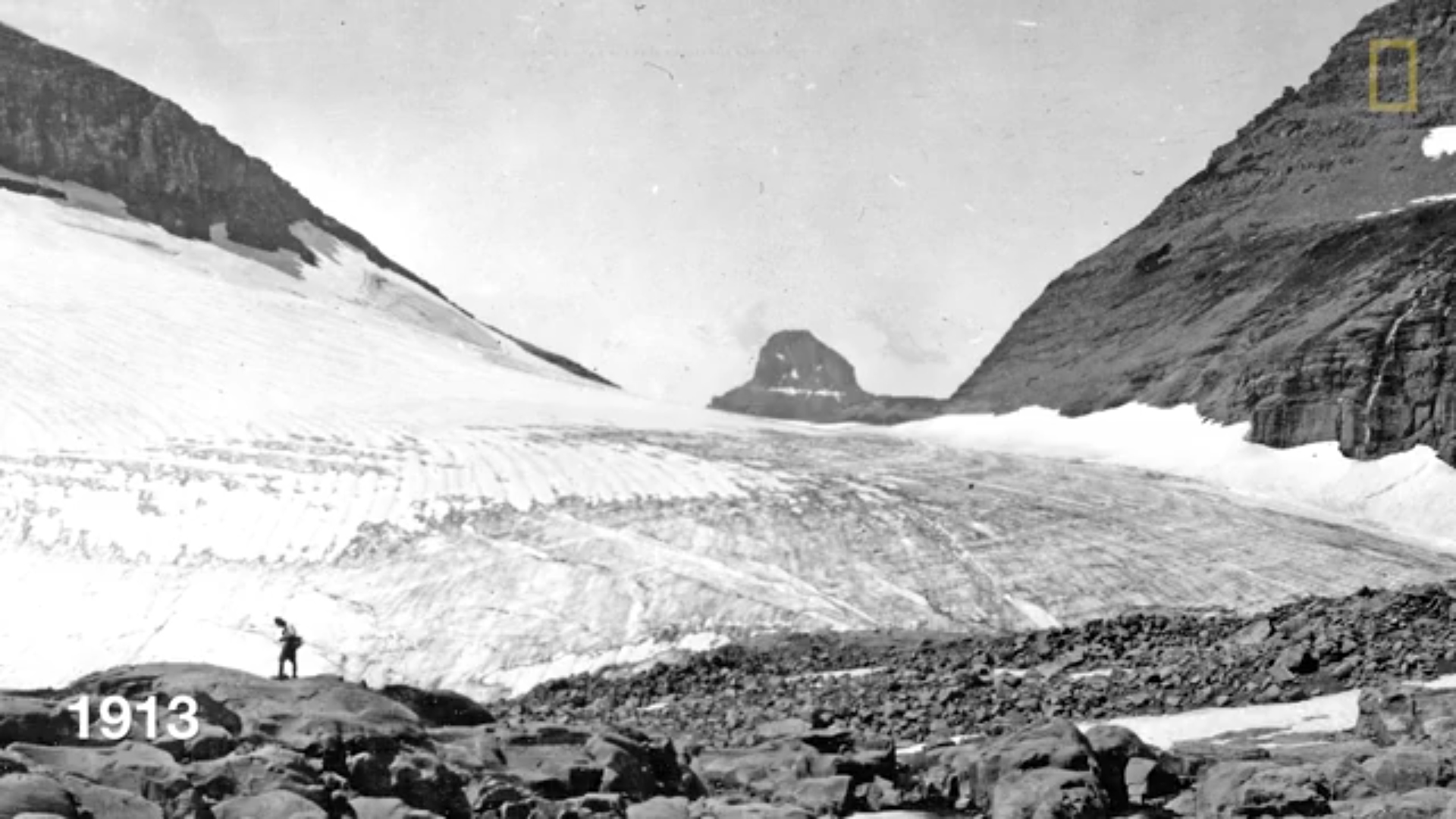 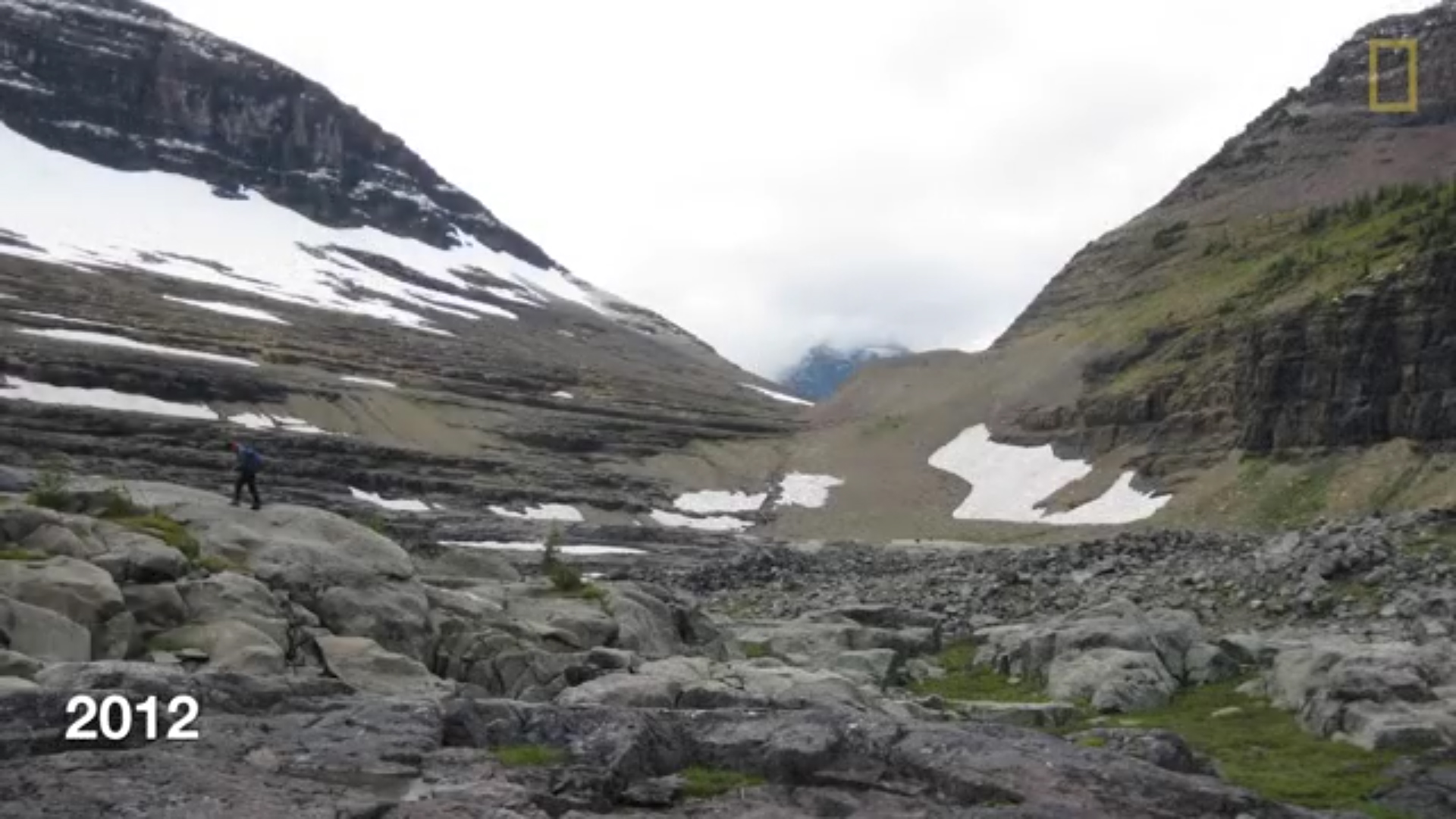 Other techniques, such as GPS and up-close inspections, are also used to study and document the ice, but they don’t convey the dramatic changes as efficiently.

The visualization of the melting glaciers is not only important for scientific purposes, but also to show the general public the results of global warming.

“The striking images created by pairing historic images with contemporary photos has given global warming a face and made climate change a relevant issue to viewers,” says the USGS on its overview page of the Repeat Photography Project, which began in 1997. “The images are an effective visual means to help viewers understand that climate change contributes to the dynamic landscape changes so evident in Glacier National Park”. 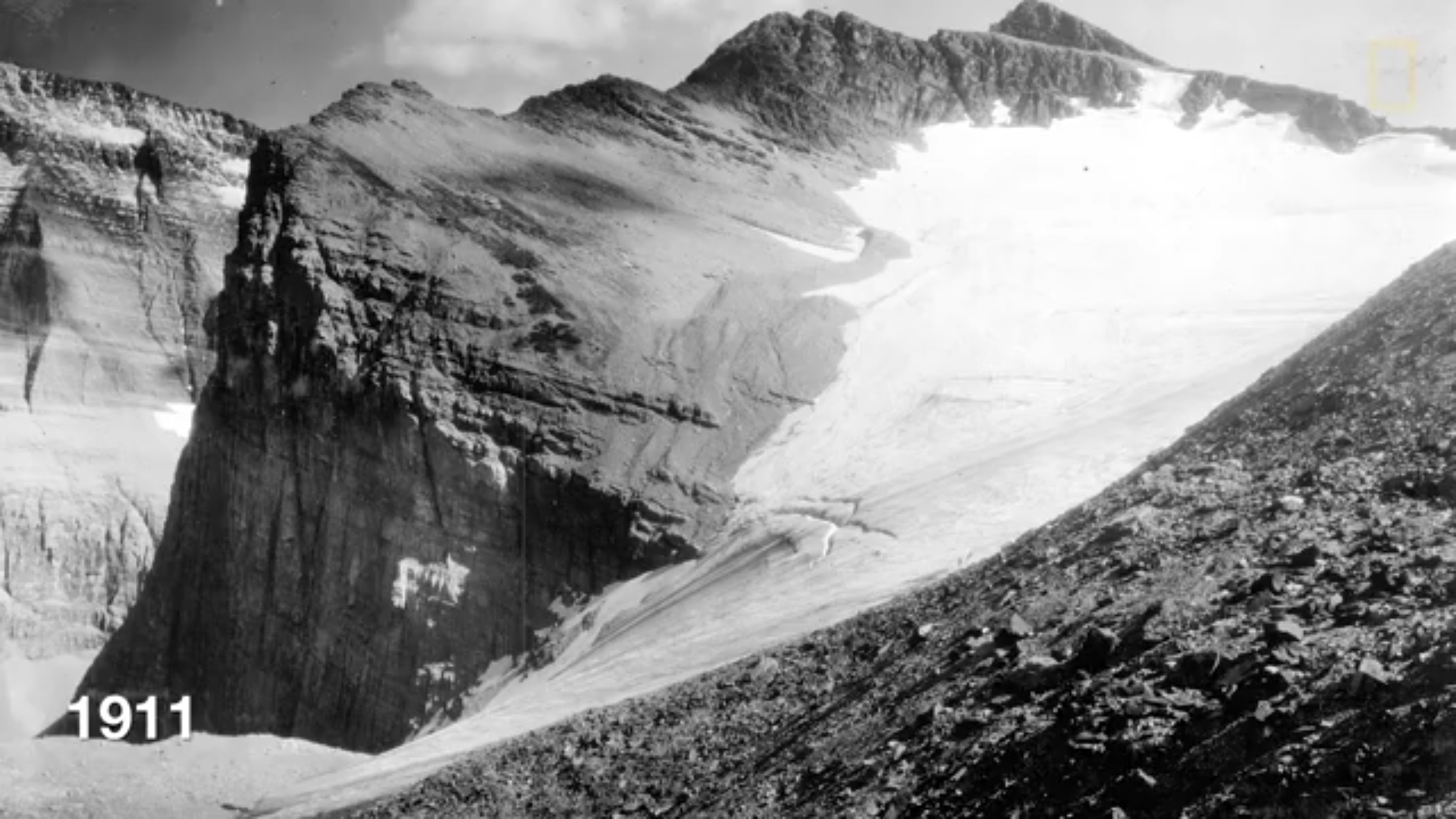 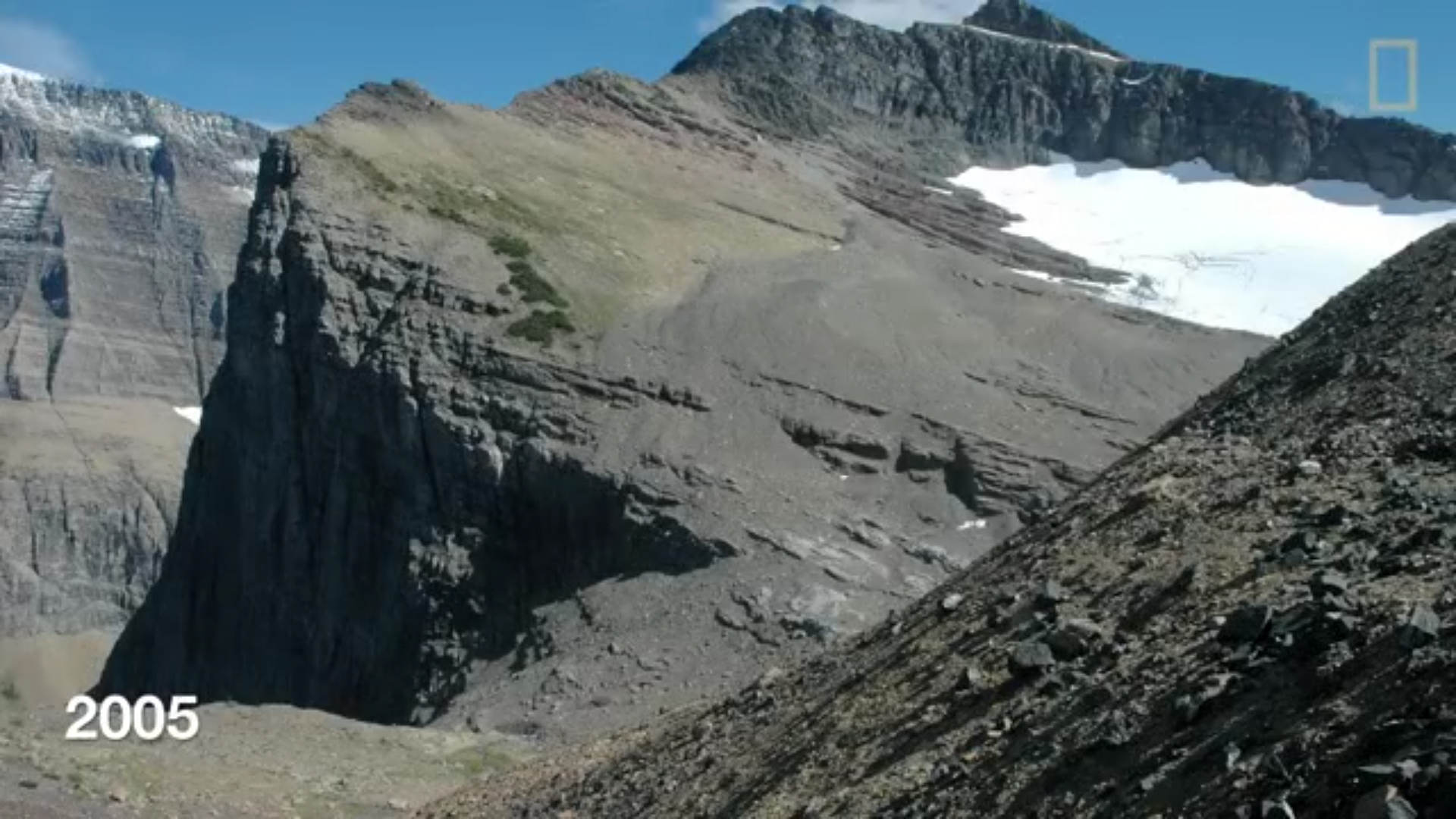 For those interested in the process, the USGS shared a bit more information about how it works:

“We began searching for historic photographs of glaciers in the vast collection that spans over a century. Many high quality photographs exist from the parks early photographers such as Morton Elrod, T.J. Hileman, Ted Marble, F.E. Matthes, and others who scoured the park to publicize its beauty and earn their livings. Copies of the historic photos were taken in the field to help determine the exact location of the original photograph. Photographing the glaciers cannot occur until the previous winters snow has melted on the glacial ice and when air quality conditions are considered at least good. This creates a narrow window in the northern clime of Glacier National Park where smoke from forest fires prevented photography on many occasions in the past few years. Since 1997 over sixty photographs have been repeated of seventeen different glaciers. Thirteen of those glaciers have shown marked recession and some of the more intensely studied glaciers have proved to be just 1/3 of their estimated maximum size that occurred at the end of the Little Ice Age (circa 1850).”

The video below shows more of these photos and explains the importance of the glaciers on their environments: