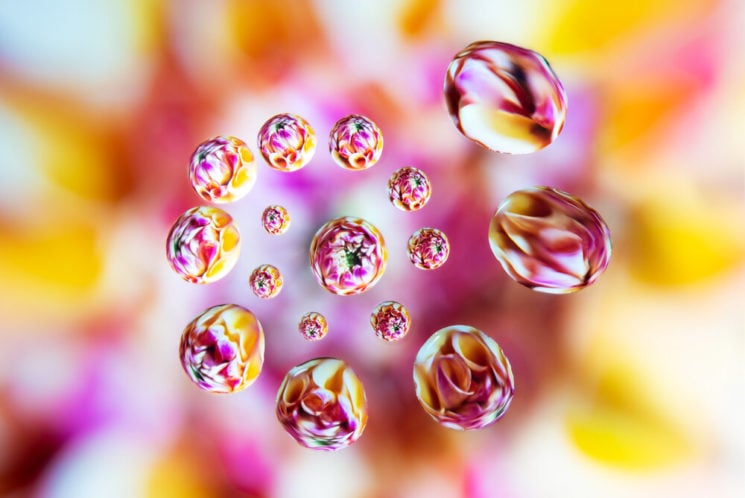 Refraction photography is an exciting subject that enjoys increasing popularity amongst photographers. You have probably seen refraction photos before, where an out-of-focus background appears sharply defined inside a crystal ball or a dew drop for example. In today’s post we will examine this phenomenon and learn how to take stunning photos, taking advantage of this fascinating effect. 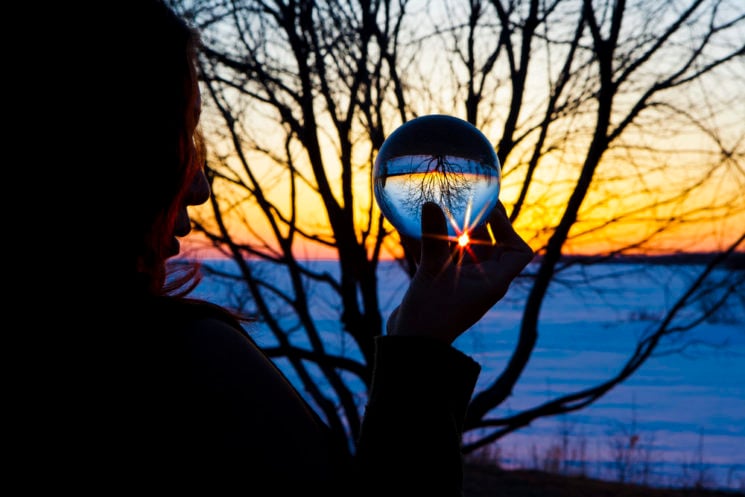 A typical refraction photo: The out-of-focus landscape in the background appears sharp and vertically flipped inside the glass orb.

Physically speaking refraction is a very broad term; it generally describes the process of light passing from one medium into another and the effects this has on its speed and direction. A prism for example affects light of different wavelengths differently and splits white light up into the colours of a rainbow. Or sunlight shining through a glass of water and casting interesting patterns on a table top would be another example. 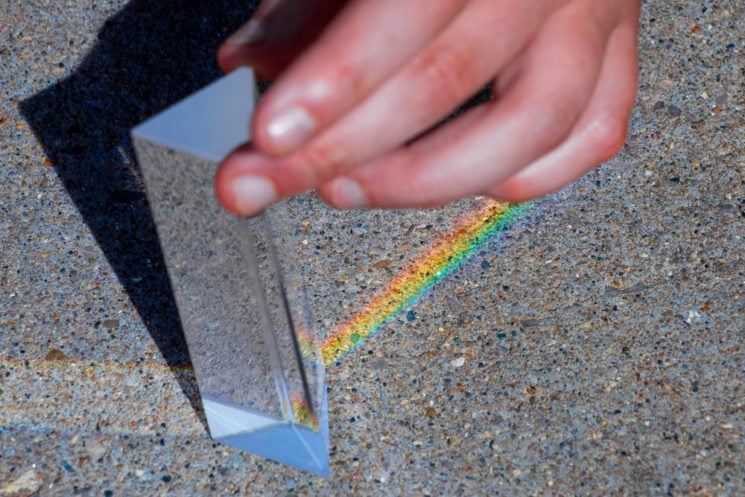 A prism affects different light waves differently and breaks light up into the colours it consists from.

So basically refraction happens around us all the time – wherever there is light, pretty much. Even your camera lenses and the optical coatings on them work by the laws of refraction. But the effects become especially interesting when it comes to round and transparent subjects, such as a lens balls or water droplets for example. 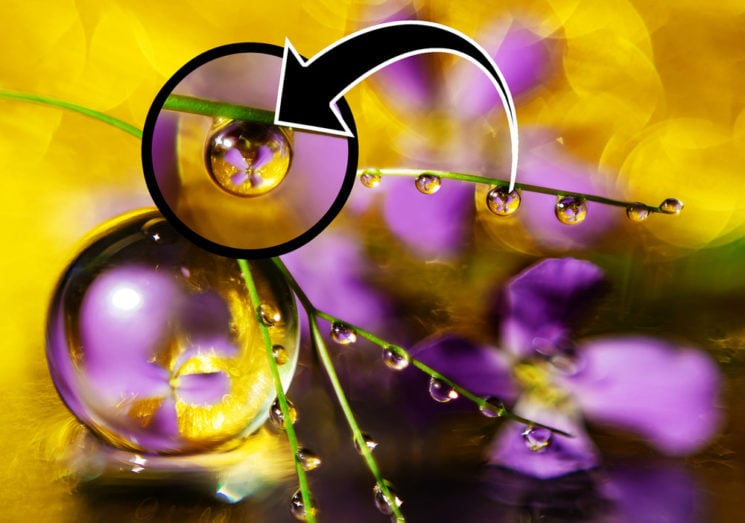 Lens balls and water droplets both are ideal subjects, that will create a sharp projection of their background.

How does it work?

Because of their convex lens-like shape certain subjects refocus the light that passes through them into a sharp projection of their background – just as like a lens would. This phenomenon makes for stunning photographs; imagination is the only limit. Pretty much anything transparent with solid spherical shape will function as a lens and show this effect.

Lenses and other transparent convex or spherical objects gather light rays from a spectrum of angles and refocus them into a sharp but vertically flipped image.

When it comes to capturing this phenomenon in images there are a couple things you should now:

Especially if you want to create that effect where the background is blurry but the foreground is super sharp you will need to open up your lens’ aperture a bit. Another way to increase the blur effect is to move the background even further away from the scene; but be careful if you do so, to not reveal anything else but what you want to be seen inside the transparent sphere ( such as the edges of a photo for example).

There is a variety of subjects that will work for this matter; let’s have a look at some of them:

A good trick to add even more surface tension to your water beads is to mix in some glycerin, which can be found online and in most pharmacies. Mixing it with water will result in a liquid that will yield even better result than pure water. 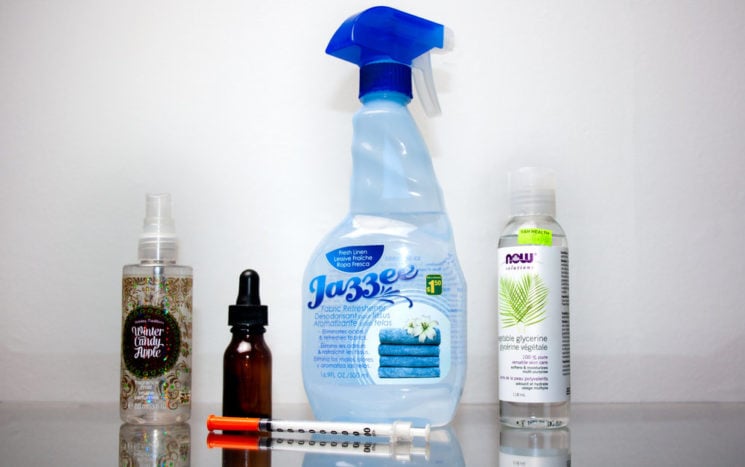 Items I typically use for my photographs: A couple old spray bottles filled with water, an eye-dropper, glycerin and a syringe.

But enough of the theory! Now that we know what kind of subjects work, let’s have a look at the practical side. In the following we will see some refraction photos I took and give you an insight into their creation.

The image below was shot using a crystal bead from an air freshener. A patch of moss which I usually keep in a humid plastic container made for a wonderful stage and a flower photograph in the background served as a warm and colourful background and as a point of interest inside the bead: 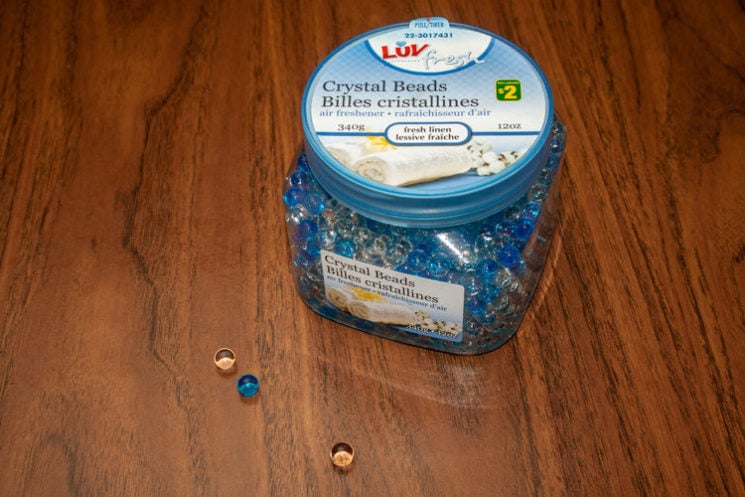 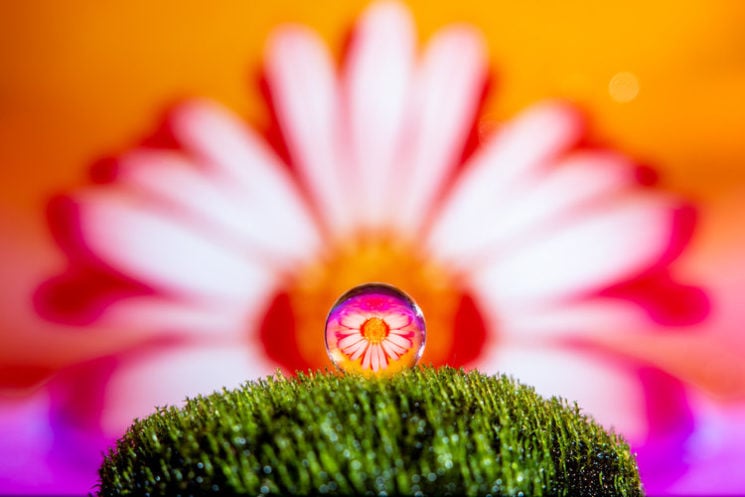 A lens ball serves the same purpose, but is quite a bit larger and easier to keep clean and use outdoors. For the photo below I used golden glitter paper in the background and shot wide open at /1.8 to get the Bokeh I was after. Since refraction photos generally need to be stacked for best results anyway I didn’t mind the shallow depth of field. 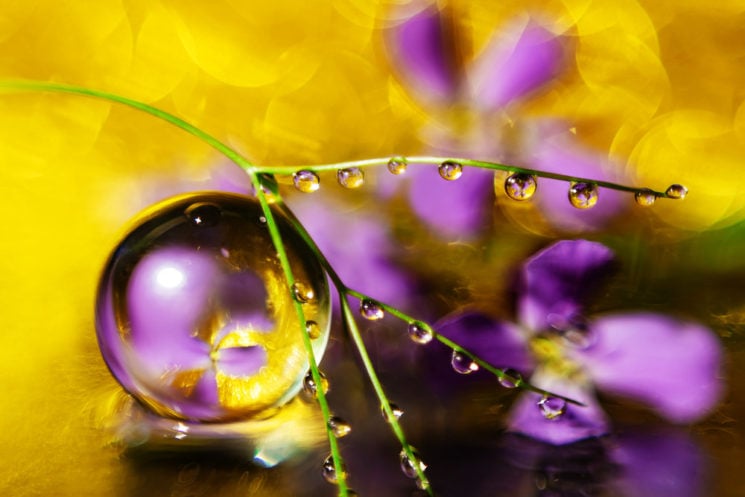 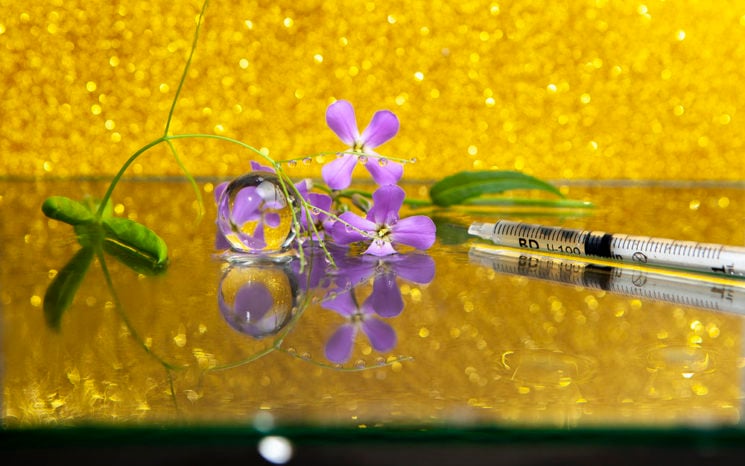 Dandelion seeds are a wonderful substrate to place water droplets on with either a syringe or a mister. And there are so many different ways to arrange you’re setup and possible compositions: 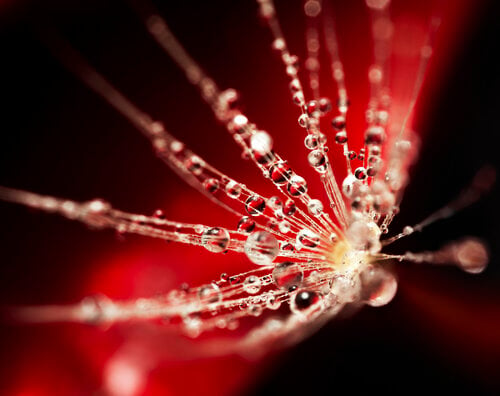 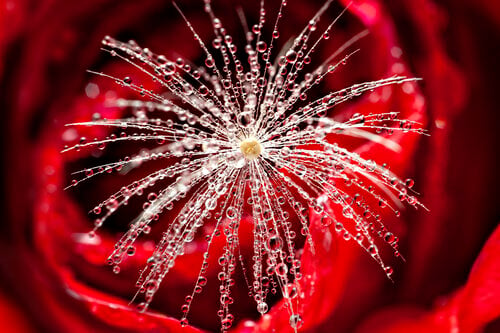 Watch the video below for a good look behind the scenes:

The next set of photos was created with a flower photograph in the background as well, but executing the shot was little bit more difficult. This is why I created a making of video, where you can watch how I set up the dripping mechanism and built the scene. 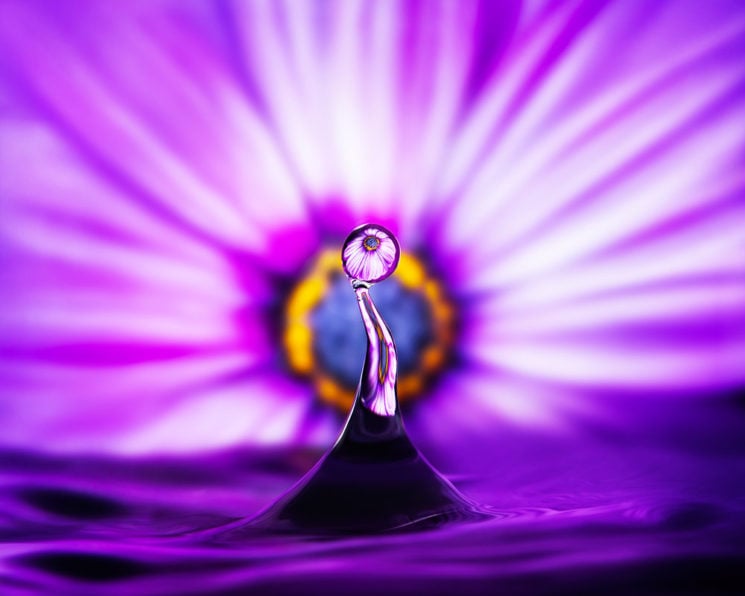 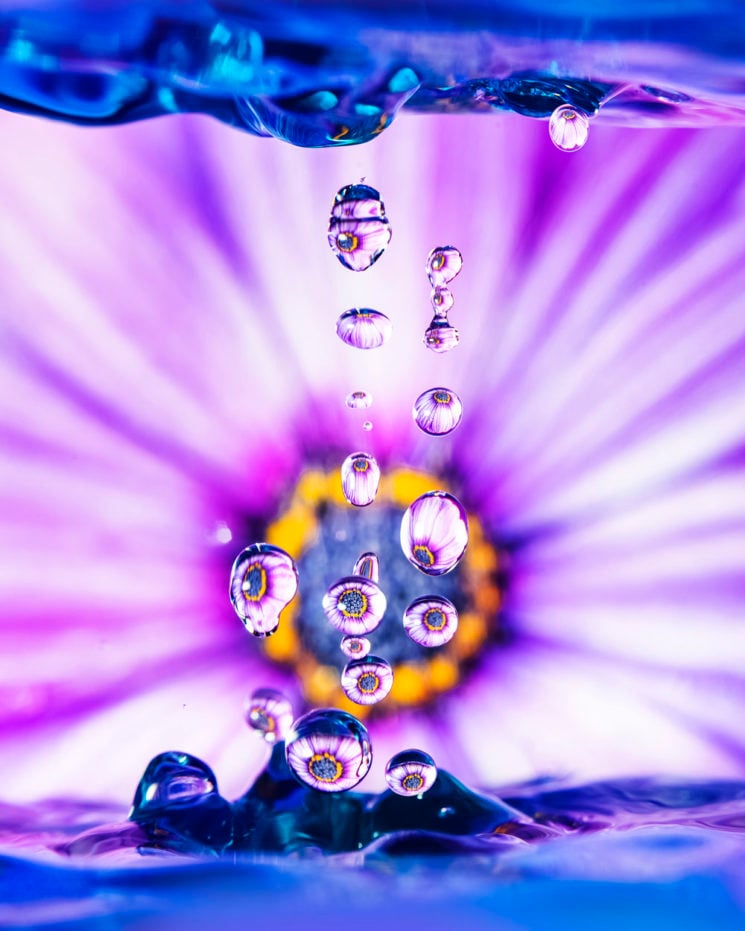 A glass with a water and an overhanging cloth inside it functions as a drip feeder. Place a small sauce trey or something alike underneath to catch the droplets and make them bounce out of the surface. You will also need a speedlight, ideally at a low power setting to freeze motion and capture a crisp image.

Of course this isn’t the only way to take refraction photos using water drops, instead you can simply place beads on a leaf, a flower, or dandelion seeds to create images such as these: 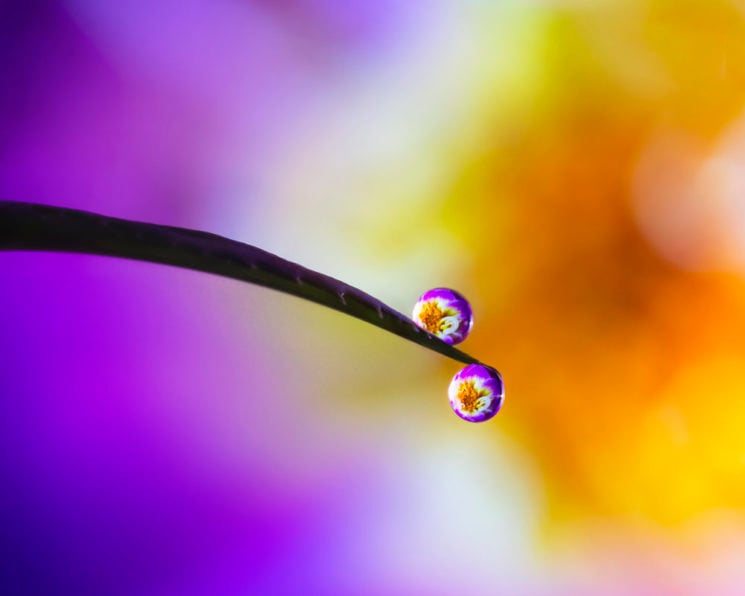 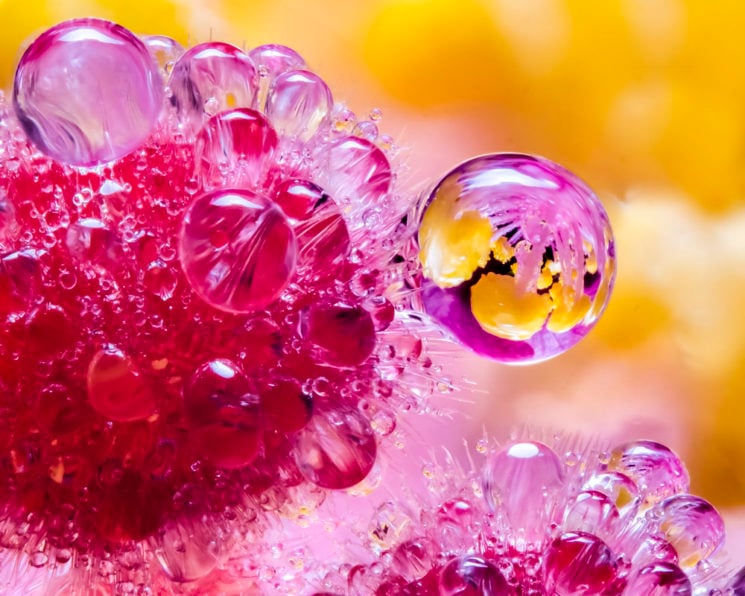 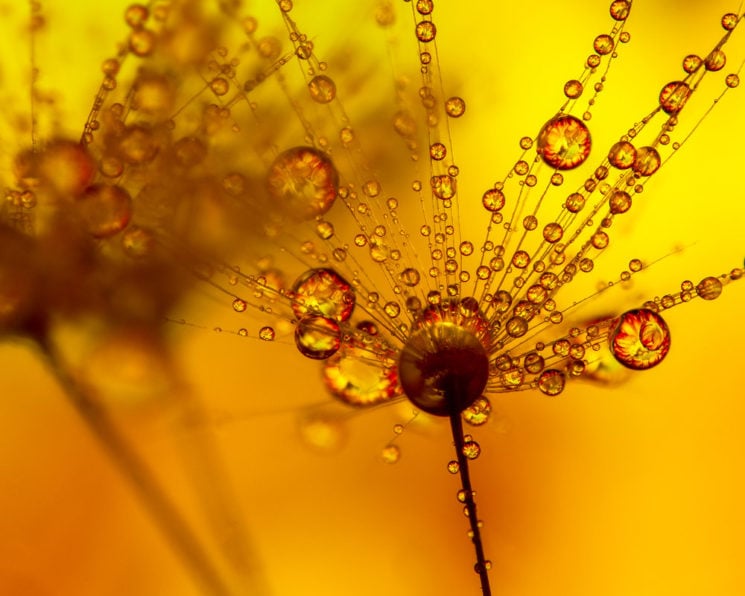 Or just use a piece of glass to place your droplets on, such as a UV-filter for example.

Swipe to peek behind the scenes: 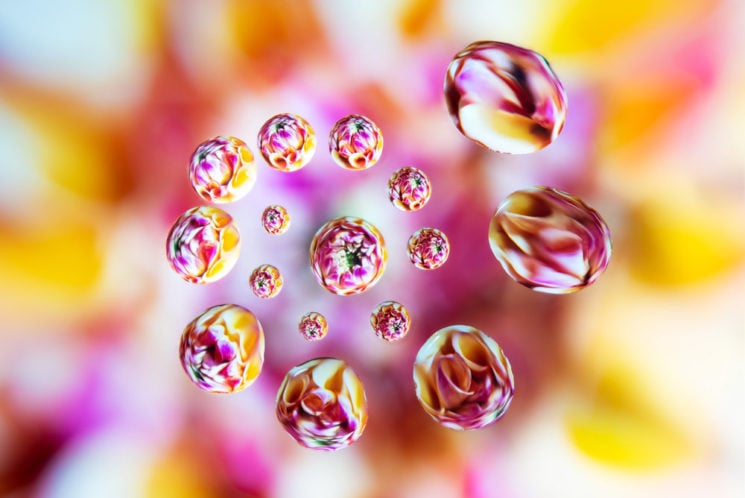 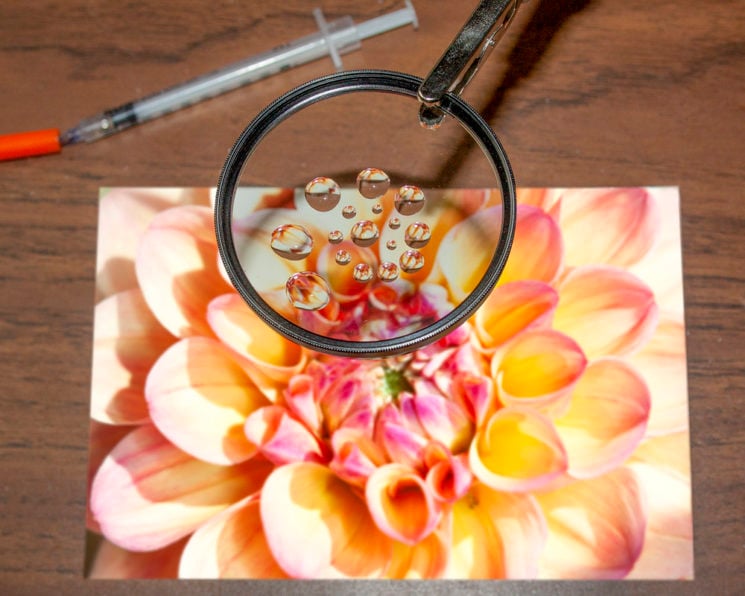 It always pays off to think outside the box. In the image below I used water as a medium again, but instead of a water bead I used it in an even more lens-like shape: I used a feather that I dipped into water, to create a thin layer of water in the center of an enrolling cucumber sprout. The forces of surface tension and gravity cause it to be thinner around the edges than in the center, which made it ideal for another refraction photo. 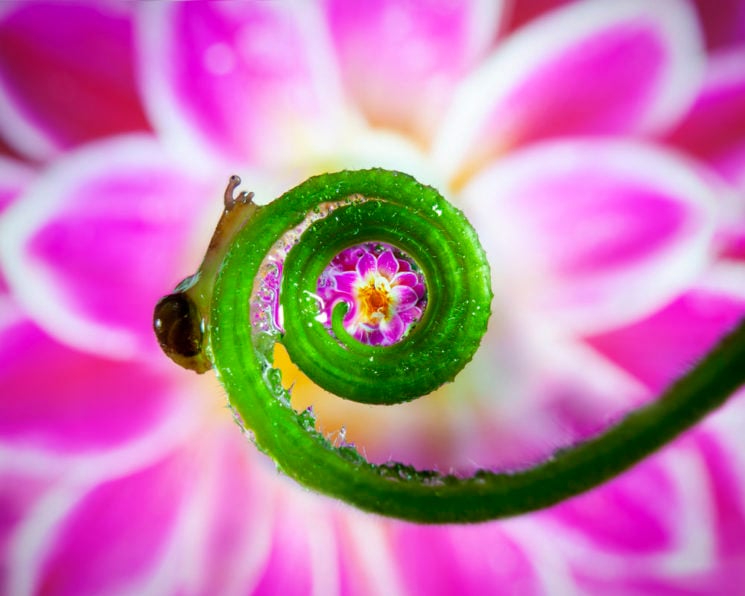 Another, rather untypical concept I came up with produced the image below; using a skeleton leaf as a frame for water or glycerin will create a patchwork effect that reminds of stained glass. 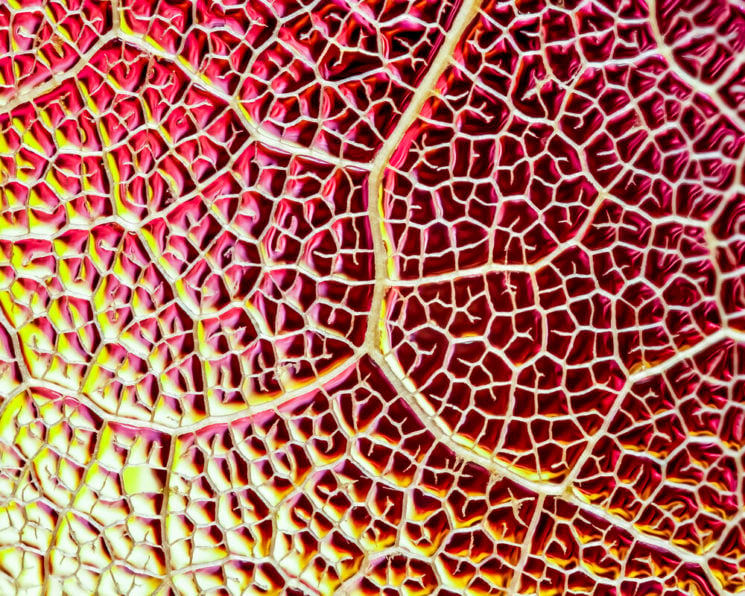 And last but not least, the shot below shows air pockets inside a water container in which I also immersed a pink Daisy. 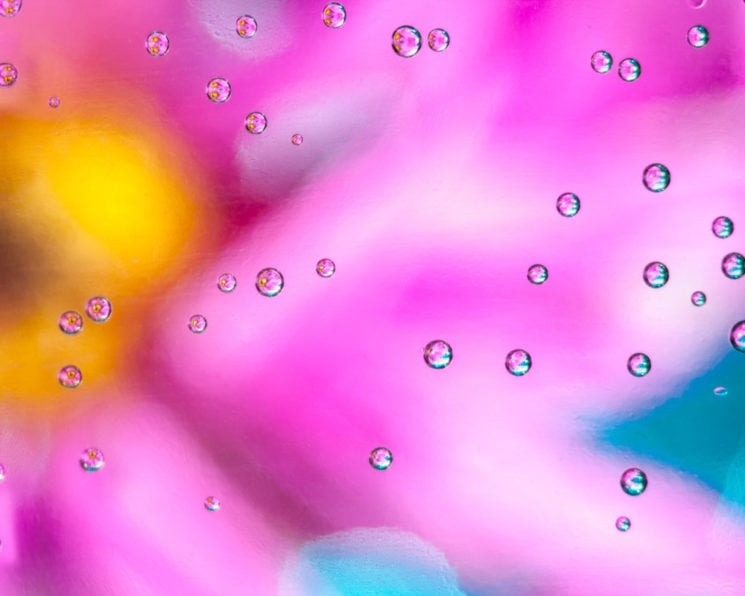 And obviously flowers aren’t the only backdrop you can use. They are ideal because they are symmetric and colourful, but anything will work really. Try using a landscape photo, or just a blue sky with a sunburst. Maybe even a planet or an image of our whole galaxy – that would look pretty cool inside a water drop, I bet!
Or something more abstract such as a CD: 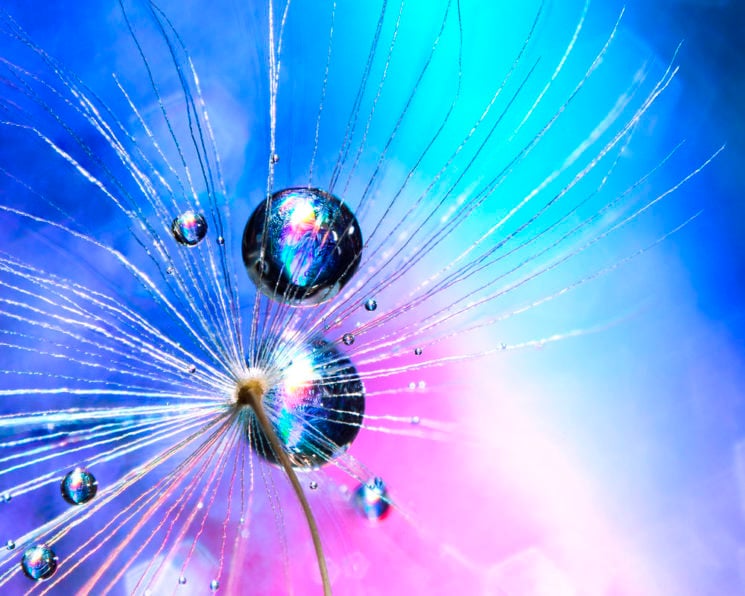 Now you should be fueled up with ideas for your next refraction project and ready to shoot! By the way, if you’re looking for suitable backdrops check out our free gallery of background photos to download and print: Download Backdrops

Follow these eight tips for stunning colors in your photos