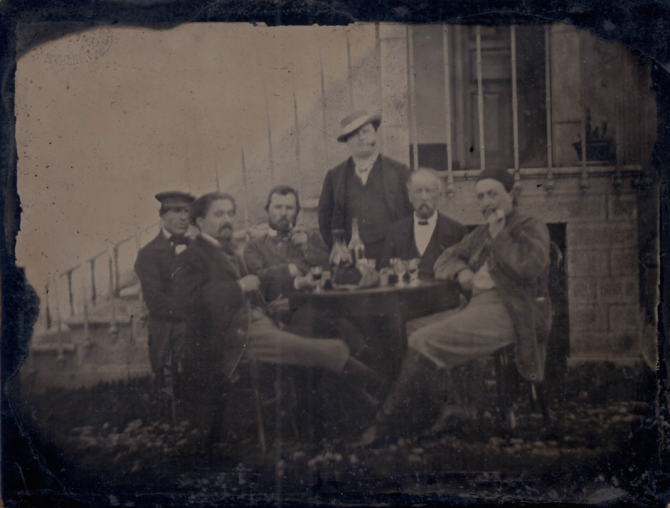 Photography is probably one of the greatest tools for preserving history.  While present generations stand at a perilous place with all of our memories sitting on hard drives and SD cards, we are thankful for those who had to take the time to develop each shot into a physical medium.  Writings and paintings can only provide so much accurate detail and are often skewed by the perspectives of their creators, but photographs seem to preserve another level of historic accuracy.

Vincent van Gogh, the Dutch post-impressionist painter best known for The Starry Night, his insane preoccupation with selfies, and chopping off bits of ears long before Mike Tyson made it popular, has often been portrayed as a dark and brooding cloud in art history.  Yet, we have never seen a photograph of his face in adulthood…until now.

Known photographs of van Gogh in his youth have been confirmed for a while, but this week, a 1887 photo of van Gogh as an adult sitting around drinking with friends went to auction at The Romantic Agony auction house.  Along with the melancholy painter are pictured such greats as Paul Gauguin, Emile Bernard, Félix Jobbé-Duval, and André Antoine.

Serge Plantureux, the owner of a pop-up gallery in Paris, is the one who brought the photograph to light (so to speak) after a reluctant couple showed it to him.  In writing about the discovery earlier this week, Plantureux explains:

“The photograph they had brought to show me was small, dark, and rather difficult to see. Six characters were around a table. The light was pale, perhaps it was a winter afternoon.

“They told me, still hesitant, that they thought they recognized the people in it, artists in whom they had long been interested. They were collectors and liked the painters of the late 19th century, in particular the neo-impressionists. They also said it was possible that one of the figures around the table was someone whose true face had never been seen.”

As I alluded to earlier, this generation of photographers seems to be doing little (compared to previous generations) to actually preserve our images in a physical medium.  I, for one, am extremely guilty, often finding it more convenient to simply keep my photographs in the form of 1s and 0s.  But, what classic moments, what glimpses into history will we have robbed the future of 130 years from now?

Why We Started Photography in the First Place