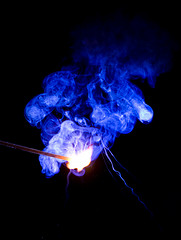 This is the second part of the Readers Projects series, my way to show my love and appreciation to DIYP readers.

In this series, I’ll be posting some of the great projects DIYP readers brought to life. I learned about those projects either from DIYP flickr group (thanks you all for sharing) or from DIYP readers mails. The first project was the Christmas Tree Ring Light, a cold and snowy project. This project is all about fire – to even the temperature. If you’ve ever watched the legendary mission impossible show, you’ll remember that unforgettable starting frame where a match is being lit from nowhere and this match starts a fuse and eventfully… “This message was self destructed after ten seconds“.

Photographer Nick Wheeler recreates the magic of MI in his “How to Light a Match” setup. (Yap, it is the same Nick who invented the Floor Lit Table Top Studio Project. 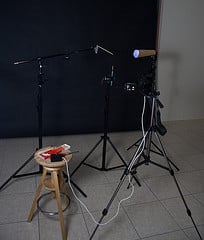 The basics of the setup are a match a snooted flash and a camera. Those three elements form a triangle, where the snooted flash is backlighting the smoke.

Being the Nick that he is, the setup was spiced a little with two elements:

The first element is a blue filter on top of the flash. It is this blue filter that gives the smoke the nice blue shade.

The other element is a butane powered soldering iron below the match. The hit from the butane iron warms the match until… TADA! the match lights up. This enabled Nick to take a burning match shot with out a hand lighting the match.