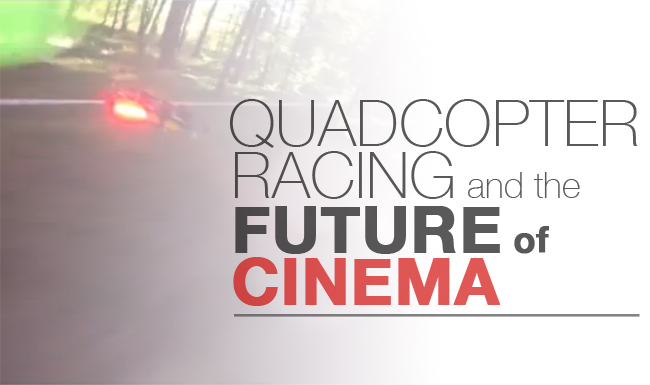 It seems like as soon as quadcopters came onto the market, photographers began adapting them for more than just disastrous fun on Christmas afternoon. Since then, hobbyists, photography enthusiasts, and even corporate giants (let’s hear it for Amazon!) alike have been putting them to multiple uses, both business and pleasure.

AIRganoy, a “quadcopter racing fanatic association” based in eastern France, holds regular events for remote control pilots, including races like the one below that would seem more at home on a Lucasfilm set. The contestants race through the forest along a pre-marked course where, as seen in the video, “eating dirt” is a bit more reality than euphemism. Each copter is equipped with a video camera which sends a live feed back to the pilot, allowing them to navigate the treacherous, obstacle-laden course.

But one has to wonder, as the technology and capabilities continue to improve on these gadgets, what will the future of cinema look like? Just as digital cameras brought photography to the masses, I believe that innovations like this will bring cinema-level capabilities to the average person (who has a couple bucks to spend). Small-budget productions will be able to strap a Red Epic to a stabilizing gimbal on the underside of a quadcopter and replicate what was once only possible with huge budgets and tons of equipment. The aspiring film student can already capture those Lord of the Rings-esque aerial shots for less than $1,000 with a copter and GoPro, and I’m just waiting for someone to recreate that epic Star Wars chase with an iPhone.

This folding “ballistic” quadcopter drone launches out of a cannon