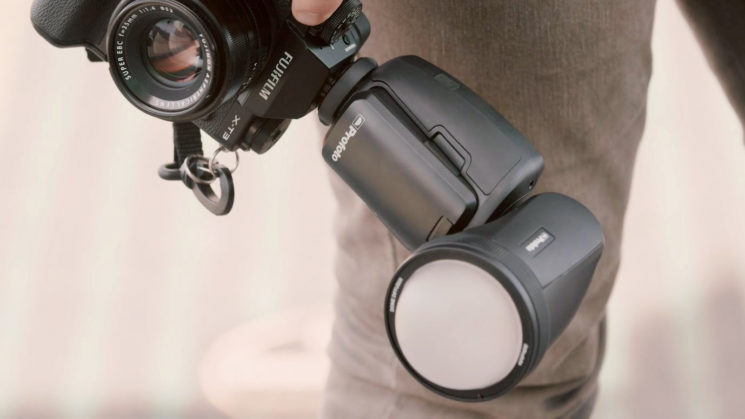 Profoto calls it “The world’s smallest studio light”. Most of the rest of us just call it the $1,100 speedlight. Yes, that’s right, we’re talking about the Profoto A1X. An update to the original $1,000 speedlight, the A1X has also proven to be a fairly popular light amongst Nikon, Canon, Sony and Olympus shooters. Thus far, though, Fuji users had been left out in the cold, at least on the hot-shoe.

No more, though. Fujifilm has announced compatibility with the new Profoto A1X AirTTL-F designed specifically for use with Fujifilm cameras. Support also comes for the Off-Camera Flash Kit, which includes the A1X AirTTL-F as well as the button-free Profoto Connect Wireless Transmitter.

As with most speedlights, the Profoto A1X AirTTL-F is primarily intended to reside on the camera’s hotshoe, offering up to 450 full-power flashes on a charged battery. It has a 1 second recycle time, plenty of wireless channels to choose from to help avoid any interference and an updated UI over the original Profoto A1.

It was possible for Fuji users to use the A1 and A1X speedlights before, but only off-camera. You could use A1 or A1X units designed for other systems off-camera with the Profoto Air Remote TTL-F for Fujifilm atop your Fuji body. But sometimes you just want to stick a light on the camera, bounce it off a wall or ceiling, and let it do its TTL thing. Now, Fuji shooters can.

The Profoto A1X AirTTL-F is available to buy now for $1,099 or can be pre-ordered now for $1,199 as part of the off-camera kit, including the Connect Wireless Transmitter.