Over the past couple of decades, very high-quality video-capable cameras have down a lot in both price and size. So, why then, are the camera setups used for shooting broadcast TV content still so huge? and why are they so expensive?

In this video, Zebra Zone breaks down exactly what’s involved in these types of setups, exactly why they’re needed and why they cost as much as a house. He also busts a big myth that it’s the camera that’s huge. Much of the bulk and cost are the extras bolted onto it.

The setup shown in the video comes to a total cost of around $250,000. That’s a hell of a lot of money, but almost 90% of that cost is the lens attached to the camera, which is just a $3,500 Blackmagic URSA Broadcast camera. The tripod and fluid head alone come in at almost six times the cost of the camera, at around $20K. The remote control handles, lens adapter, monitor and fibre optic transmission module total up to around another $21K.

As explained in the video, in traditional video setups, what you shoot is based on the gear you have available to you. You adapt your environment to your kit. In broadcast, it’s the other way around. Your gear needs to be able to adapt to any environment it finds itself in. This could mean everything from talk shows to sports coverage. And kit that can adapt to just about any environment is very expensive (and huge). 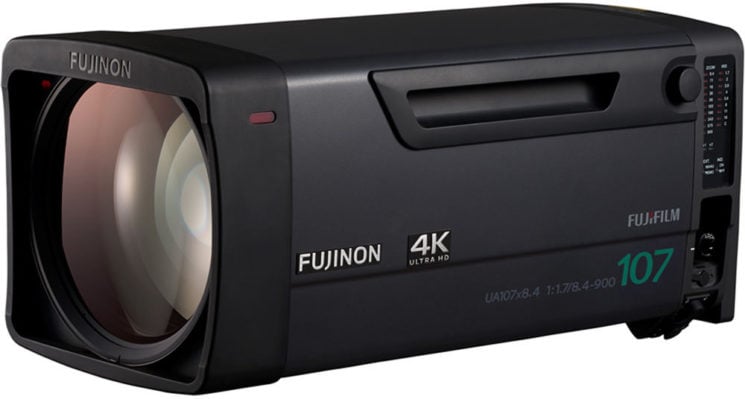 The lens shown in the video is a Fujinon 4K UHD 8.4-900mm f/1.7 4K. It’s packed with so many features it’ll make your head spin. But the biggest is that it’s parfocal. There’s no need to refocus your shot as you zoom in and out, which is vital, especially on a live broadcast. It also features built-in image stabilisation, it’s razor-sharp across its entire focal length, and it can go from minimum to maximum very quickly. Oh, and it has a built-in 2x teleconverter, giving it a final range of 8.4-1800mm.

We look at those $10K cinema lenses and think they’re amazing, and even those are out of the reach of many low budget filmmakers. But even those are nothing compared to something like this. Something so big that it requires external controllers for adjusting focus and aperture. Not optional extras, like throwing a follow focus on a cinema rig, but actually required as part of its operation.

But it’s nice to know that even if we can’t afford or justify the types of lenses they use for broadcast work, the cameras at least are attainable for even lower budgets.

Why Hasselblad cameras are so expensive

« The Nikon D610 and D810 are officially listed as discontinued
Profoto’s $1,095 A1X Speedlight is now available for Fuji »