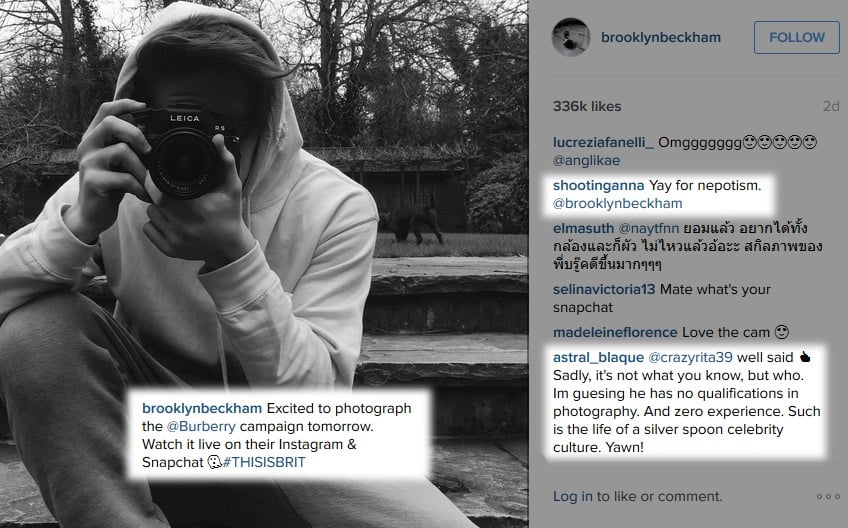 After his younger brother Romeo participated in a Christmas ad for Burberry, a British luxury fashion house, 16-year-old Brooklyn Beckham was chosen to photograph the company’s latest fragrance campaign.

Claiming that he was chosen due to his parents, David and Victoria Beckham, and his many Instagram followers, professional photographers are complaining about nepotism and the “devaluation of photography”.

Was this a smart marketing strategy or a slap in the face of professional photographers?

Beckham recently announced on his Instagram account that he will be shooting the Burberry campaign, but among the 336,000 likes and 1,350 comments were also quite a few disgruntled photographers.

One of the frustrated photographers was fashion photographer Chris Floyd, whose clients’ list includes media outlets such Esquire, Vogue, Sunday Times, ESPN, and The New Yorker. Floyd told the Guardian that the company showed a lack of respect for experienced and hardworking professionals. He added that the decision to hire such an inexperienced photographer was a “devaluation of photography”.

Floyd, who’s had his fair share photographing celebrities as well, spoke about how the budding photographer’s jump into the deep water “goes against everything his parents represent”:

“David and Victoria Beckham represent sheer willpower and graft. Especially her, she’s climbed that mountain all by herself. They represent hard work and then their 16-year-old year son comes along and it’s sheer nepotism. He hasn’t done it from hard work, which is counter-intuitive to what his parents represent.”

That being said, Floyd also understands the marketing value of choosing a young star with millions of Instagram followers, calling the decision “clever” but having nothing to do with producing good photography:

“Part of me takes my hat off to Burberry and says that’s clever, but the photographer side of me says for god’s sake. Brooklyn Beckham’s got however many million Instagram followers, that’s what’s attracted Burberry. The people his age are Burberry’s target market or the future target market.”

In case you were wondering, young Beckham has over 5.9 million followers, so the added value for selecting him is quite obvious.

Another professional photographer who was unhappy about Burberry’s decision was Jon Gorrigan, who said he expected the company would take care of the setup and everything else so Beckham would only have to press the button. Stating Beckham is incapable of doing the work himself, Gorrigan also said he was chosen for his name rather than his talent:

“He’s obviously not going to be doing the lighting, he’ll have no clue of the programmes, the cameras or Photoshop. It’s going to be so well managed – he’ll have the best hair and makeup, the best models, the very best equipment, so that the chance of any risk is greatly reduced.

It infuriates me because I learned my trade and other photographers learn their trade but he’s not learning his trade. I can understand why they’re doing it, getting the younger generation interested in Burberry. It definitely annoys me. Names sell, don’t they?”

“People who are under-trained can get a good result with an Instagram filter. I suppose it keeps me on my toes,” Gorrigan concluded. “The industry is like that, a bit of injustice in a lot of areas.”

Not everybody spoke against the controversial decision, though. Sarah Brimley, now a photographer but until recently an assistant to the fashion photographer David Bailey, was on Beckham’s side:

“I don’t think he feels entitled and I don’t imagine he’s this spoilt brat. He hasn’t had to do the work the rest of us have to do but … he probably knows how lucky he is.

“There is a proportionate amount of people who work hard and others who just have it handed to them. Brooklyn is lucky now but he hasn’t had the years of assisting some of us have had”.

“The slow and steady route is a guarantee to success if you have the talent,” Brimley added.

Unsurprisingly, Burberry itself defend the decision to hire Beckham to photograph the campaign, but also hinted that his online presence had a part in it.

Christopher Bailey, Burberry chief creative and CEO said “Brooklyn has a really great eye for image and Instagram works brilliantly for him as a platform to showcase his work. His style and attitude were exactly what we wanted to capture the spirit of this new fragrance campaign.”

While the frustration felt by many professionals is understandable, one must also keep in mind that when the younger Beckham son appeared in the company’s ad it received 11 million views in just two days.

Brooklyn Beckham might have a promising future as a photographer, but at this point I think everybody can agree that his photographic capabilities were not what landed him the job.

The only question is, was this a smart and legitimate marketing move or another move against professional photographers?