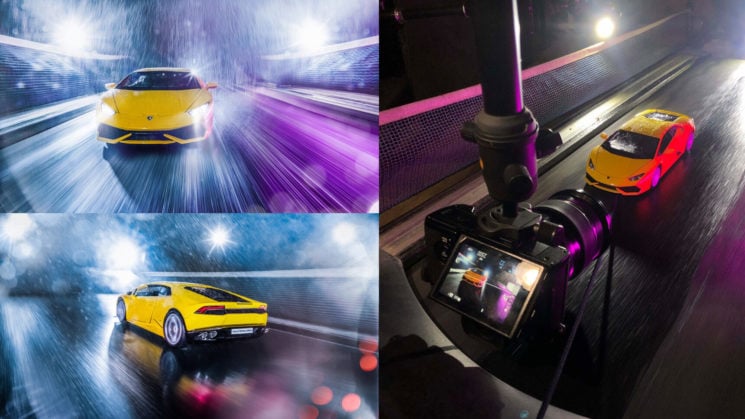 Motorsports are moving online due to the coronavirus pandemic, but it appears that automotive photographers are also finding new ways of shooting fast cars in action. Kunal Kelkar is a pro automotive photographer who has found a brilliant way to shoot fast cars without leaving his home. He put a model car onto a treadmill and got some epic photos that look like the real deal. Kunal shared some of his photos and BTS shots with DIYP, so check them out to see how to take fantastic photos of racing cars at full speed – all while staying indoors.

Kunal’s photos and a short BTS video appeared on my Facebook timeline, and they blew my mind. I was amazed not only by the creativity but also the results that Kunal ended up with. When I looked him up, I realized that he is a professional automotive photographer. He started his career in 2012 and has worked with major brands such as Mercedes-Benz, Volvo, Lexus, Jaguar, and Land Rover, to name just a few. He has collaborated with these brands internationally, but also in India where he is based.

Like most of us, Kunal had plans for this year that couldn’t come to fruition because of the pandemic. He was supposed to work on projects for Lamborghini in Italy this month. “Lamborghini has to be my favorite supercar manufacturer, and I was looking forward to this opportunity,” Kunal told Motortrend in an interview. Sadly, the plans had to be postponed due to the global situation. Not to mention that lockdowns and travel bans were enforced in both India and Italy. Still, the desire to shoot stayed in Kunal’s mind.

With gyms shut down, Kunal started using the treadmill at home. This is when he had his “Eureka moment” – he figured that the treadmill belt looked very similar to the road when you photograph a car in motion. He thought that he could use the treadmill for more than staying fit, and he decided to try it straight away.

Kunal has photographed model cars before, so it was not new to him, but it was never as a part of a personal project. So he took a 1:18-scale Lamborghini Huracán replica and started playing with it. The setup is pretty basic: he simply attached the model car to the treadmill with a string, and that’s it! Of course, he added some lights to create the mood and get the desired look.

As for the gear, Kunal used a Fujifilm X-T3 with a 16-55mm f/2.8 lens, all mounted on a Vanguard VEO tripod. He used two Lume Cubes for the main light and two Profoto B10 flashes with modeling heads on. He added some ambient light and the colored highlights were created with a Yongnuo YN360 LED light wand and a Pixelstick. There are quite a few lights, but the car has to be lit well and it should look like it’s on a racing track.

While it was pretty easy to attach the car to the treadmill, photographing it was a bit of a challenge. It jumps and shakes as it “drives” along the treadmill, it doesn’t stick firmly to the ground like a real car. Also, Kunal says that it was also difficult to get everything in focus, but also to make the model car look like a real one. But if you ask me, I’d say that he nailed it!

I personally love projects like this: when the idea is so simple, yet so clever. And not to mention that I love how the photos turned out. Take a look at a few more of them below, and make sure to check out Kunal’s website, Instagram, Facebook page, and YouTube channel.