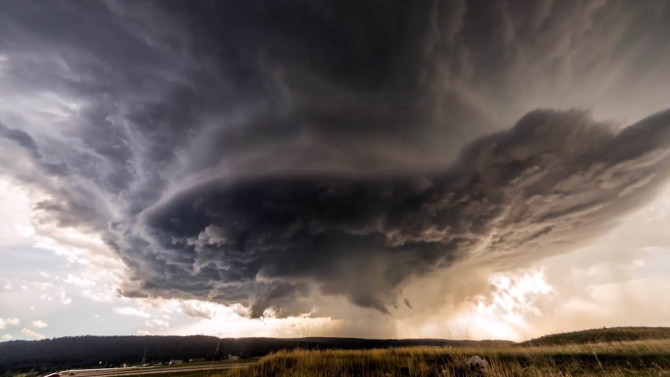 Working full time as a police officer in California, photography started as just a hobby for Jeff Boyce. Though he’s been interested in taking photos for the past couple of years, it wasn’t until this year that Boyce was ready to take on the daunting world of time lapse. Two weeks ago, Boyce released one of his first attempts at the art form and, boy, did he knock it out of the park.

Combining his love for storm chasing–a hobby picked up in 2014–and his love for photography, Boyce took a 5-week long break from his duties as an officer to travel around the country capturing timelapse of some wicked intense weather. Boyce had no plans as he pulled out of his driveway, embarking on the journey. Rather, he frequently checked the National Weather Service’s Storm Prediction Center for an indication on where he should be heading. Boyce said on some days he would travel upwards of 600 miles just to get where the action may or may not happen. Needless to say, there wasn’t a lot of sleep happening on this trip.

“My inspiration for photography has always been a desire to capture something spectacular, something unusual, and something unique. This drives me to stand in the path of a violent tornado or in the middle of intense lightning storms, to stay up all night under the stars exposing the hidden Milky Way, or to drive 800 miles in a day in search of something breathtaking.”

“The timelapse sequences were recorded with a RAW photo taken between every 2 seconds to every minute. The type of shot, movement in what I was photographing, and lightning conditions all played into this. Rapidly evolving supercell thunderstorms were recorded every 2 seconds in order to capture as much detail as possible and to create the longest clip in the shortest amount of time. On the other hand, I would leave my cameras on a mountainside exposing the Milky Way all night long, and might set the cameras to record a 20 second exposure every minute until the batteries ran out.”

To see more of Boyce’s photography you can visit his website at NegativeTilt.com.