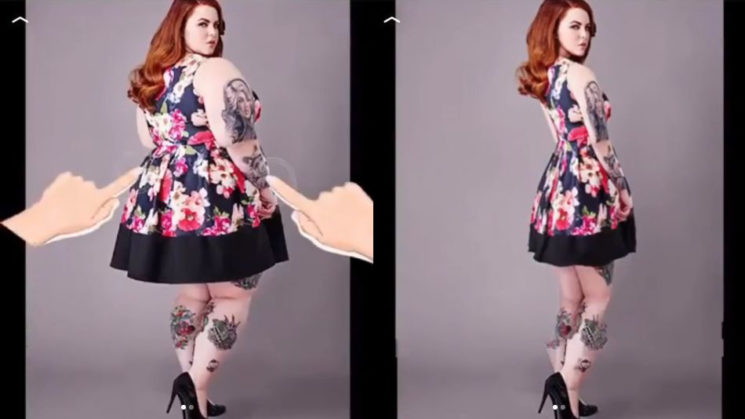 Renowned plus-size model Tess Holliday was unpleasantly surprised to find out that a beauty app used one of her photos in an ad without her permission. To make things worse, the ad used her image to demonstrate how it makes the body significantly slimmer in a single click.

According to Holliday, the app named PIP CAM has 50k downloads, and it was “dumb enough” to steal her photo for the ad. And it wasn’t only her image that was used, but the photos of two other plus-size women. The model writes that she will never partner with a brand or paid content unless she genuinely uses it or would recommend it to her best friend. And as you might expect, a plus-size model surely wouldn’t recommend an app that makes you skinny in a second. She adds that her lawyers will contact whoever is responsible for this, and reminds everyone that they’re worthy of love in their current body.

Either way, the photo of Tess Holliday was apparently used without her permission. My guess is that it’s the same with the photos of the other two ladies. So, the model has decided to start legal action. Of course, using a photo without permission is not the only problem. Another issue is that apps like this are body-shaming everyone who doesn’t fit into current beauty standards and raises people’s feelings of insecurity in their appearance. But that’s a whole other topic.

What’s more important in a model, beauty or skill?

Model Bs: A Tinder-like app that conects models and photographers in only a few swipes