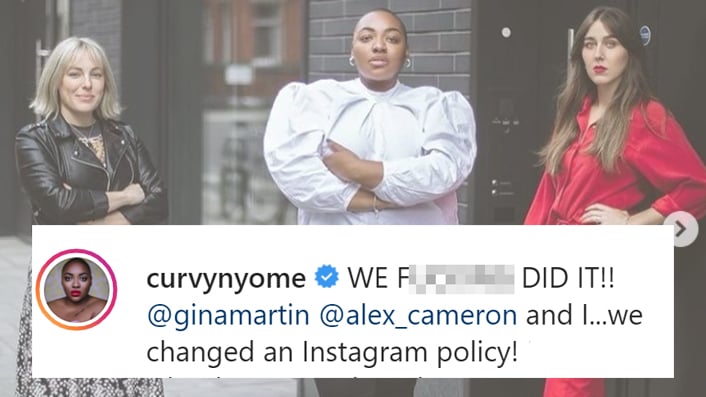 Back in June, Instagram censored an image of a Black, plus-size model Nyome Nicholas – Williams holding an arm across her breasts. This caused a lot of controversies and even started a movement and a petition for Instagram to “stop censoring fat black women.” And they did. After the whole controversy and Nyome’s campaign, Instagram has changed its nudity policy.

Back in June, Nyome posted a topless photo of herself with her arm covering her breasts and Instagram deleted it. Since then, Instagram repeatedly deleted similar photos that she posted, according to Engadget. She argued that the platform allows the same type of photos when they show skinny, white women. The model told the Guardian that she felt as if she was being silenced.

So, Nyome started a campaign #iwanttoseenyome that would make Instagram treat all body types and skin colors fairly. And now, around three months later, the platform has indeed changed its nudity policy. From now on, Instagram will allow “content where someone is simply hugging, cupping, or holding their breasts.”

“As we looked into this more closely, we realized it was an instance where our policy on breast squeezing wasn’t being correctly applied,” an Instagram spokesperson told the Guardian. “Hearing Nyome’s feedback helped us understand where this policy was falling short, and how we could refine it.”

The Instagram spokesperson followed up with Engadget. They added that photos of a person squeezing their breasts to make a distinct change in their shape are still against the company’s rules. Photos like this will still be censored “to protect users under the age of 13.”

“We are grateful to our global community for speaking openly and honestly about their experiences and hope this policy change will help more people to confidently express themselves,” said Carolyn Merrell, global head of policy programs at Instagram. “It may take some time to ensure we’re correctly enforcing these new updates but we’re committed to getting this right.”

Instagram was recently accused of fat-shaming and double standards after censoring Celeste Barber’s parody image, but not the original. You can probably guess even if you haven’t read the story: the original photo shows a skinny model, and the parody image doesn’t. The latest policy change could fix things like this, and who knows – perhaps in the future, we’ll even see female nipples without censorship on Instagram.

« Do you want to become a better landscape photographer?
This guy used a 360 camera to chase himself in these creative short videos »