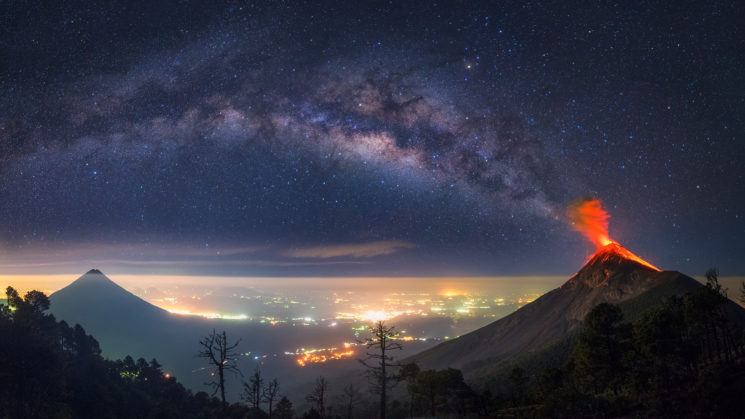 Nature has lots to offer for landscape photographers. We love to shoot nature’s paintings. Storms, rainbows, tornadoes, lightning strikes: they’re all a gift from nature that we can play with as a landscape photographer. Volcanoes are one of them, too, especially when they’re erupting. I have been fascinated by volcanoes; they have been on my list to shoot for quite a while.

My younger brother recently went to Guatemala for some backpacking and learning the Spanish language. When he sent me some photos of an erupting volcano, my photography senses were immediately triggered. The erupting volcano was called ‘Fuego’ (literally “Fire”). I managed to find webcams and activity on scopes and checked how active Fuego was. According to the history, the volcano has remained quite active, but you had to be lucky to see a lot of eruptions. Still, the idea of meeting up with my brother and shooting a volcano seemed like a good enough reason to go.

When I decided I wanted to go to Guatemala to try and shoot the volcano, I started doing my research on how I wanted my shot to look. Erupting lava is best visible in evening and night, so I was obviously going for that. I researched other shots from this volcano. Most good shots were during a full moon so that you could see the scenery well, lit by the full moon in combination with the lava eruptions. I wanted to try something different. I have always been intrigued with planning and photographing the Milky Way at particular locations. How awesome would it be to shoot the erupting volcano with the Milky Way?

I checked from what angle I would be able to see the erupting volcano. The place from which I was going to be shooting was the (inactive) neighbour volcano Acatenango. It’s possible to hike up to the top of this Acatenango for a good view of the active Fuego. I planned the shot with the PhotoPills app, and to my excitement this shot was actually possible. In the last week of March, around 3 AM, the Milky Way galactic center would be in a good position right next to the volcano. By planning on PhotoPills and visualising the view in my head, I could see how the optimal shot would unfold. 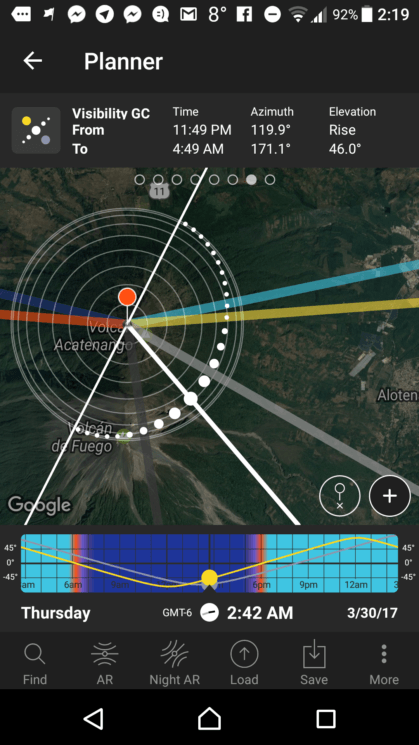 I made this plan a few weeks before going to Guatemala. This was the plan for 30 March, 2017. The plan wouldn’t differ too much for the other days around this date. As ca be seen, the milky way would spread over the panoramic view on the right of the Fuego volcano at around 3 AM, seen from the Acatenango volcano where I would be standing. By planning and visualising this in my head, I could see how the optimal shot would unfold.

This plan was made with an alpha version of Photopills for Android at the time given to me to test by my friends at Photopills. (final version was not released).

So what did I need?

With planning these tricky shots there are a lot of factors that you need to consider. I always plan everything that can be planned. When I succeed in making a difficult shot people usually say ‘wow you were so lucky.’ They’re actually right. In the end you need that extra bit of luck of everything falling into place. But I try to keep the chances as good as possible. For example: checking scopes and webcams every day to ‘get to know’ the volcano and calling the weather station multiple times to increase my chances of getting a successful shot.

graph from the systemic signal station showing the earthquake activity at the Fuego volcano daily per hour. This is live updated. I used to check this every day (source).

A few weeks later, after a close to 30 hour plane trip including transfers, I found myself in Antigua Guatemala. A nice town close to the Fuego volcano from where I could see the top of the Fuego blowing smoke occasionally along with some rumbling. I would check the seismograph activity online everyday and I noticed the days during my travel to Guatemala the volcano had been very active. We called the weather station multiple times that day to ask their thoughts on what day would be best to climb the volcano. This in regarding to both activity and clear skies. The weather predictions for the next day looked good and according to the station it would be the best day to try my luck. I was actually planning on getting a day of rest in Antigua before climbing the volcano but I knew I had to move fast. 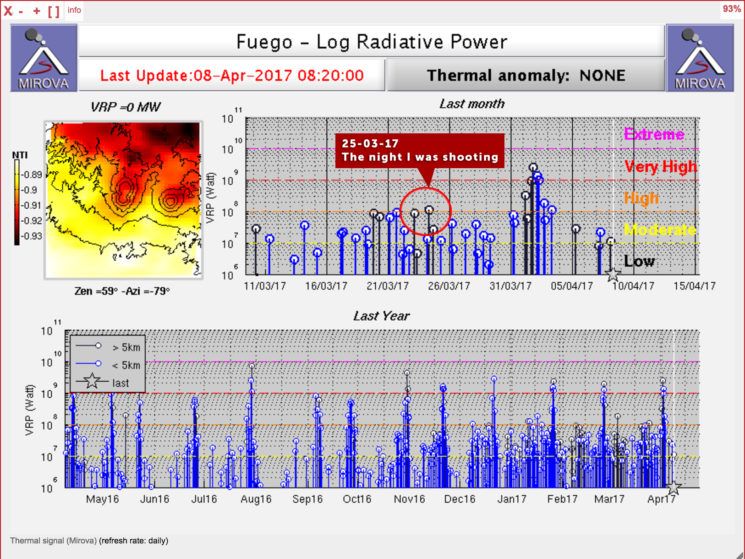 Log Radiative Power overview showing Fuego’s activity. As can be seen there was a lot of activity before the days I went shooting, giving me a high chance of success. Early march the activity of the volcano was very low. The radar also shows some very high activity on early April, but I can’t complain (source).

I knew the hike wasn’t going to be easy so I had to keep my gear relatively light while still maintaining great image quality. Also, I had heard stories about bandits robbing tourists on the volcanoes in Guatemala. This was the thing that worried me most when bringing expensive gear. Next to my backpack I chose to put my camera gear in a super shitty bag that didn’t look like a camera bag at all. Because of my relatively light and small kit, I wouldn’t stand out. I needed a tripod, but not one that would scream ‘I’m a photographer’, hence I brought a small Mefoto travel tripod that I borrowed from my friends at Benro. This could fit in my backpack so that no one would see it. Final gear brought up to the volcano: 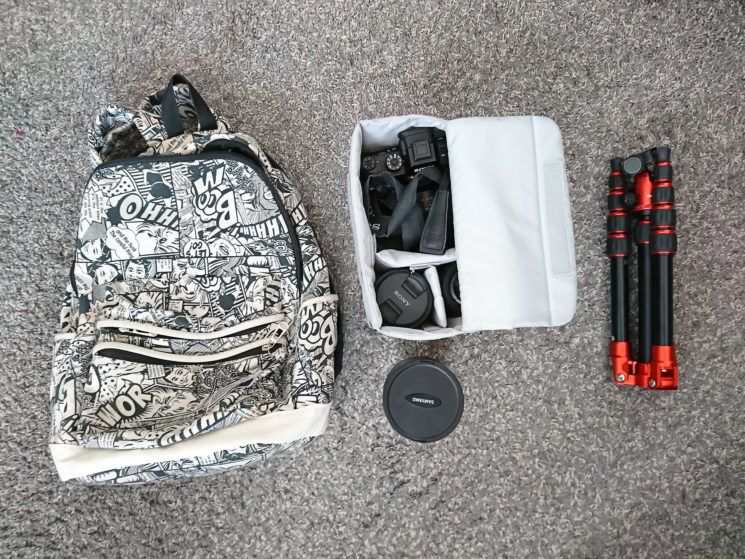 10 dollar worn out bag in which i put my photography gear so that I wouldn’t be a prime target for bandits.

After a very tough steep hike I found myself on the Acatenango volcano the next day. I arrived before sunset. It was very cloudy and I couldn’t even see the Fuego next to it. However, clouds were moving fast and I knew it was probably going to clear up. It did. When I saw it erupting up close combined with the powerful sound I was just paralysed. This was amazing. It was literally one of the most impressive things I had ever seen in nature. 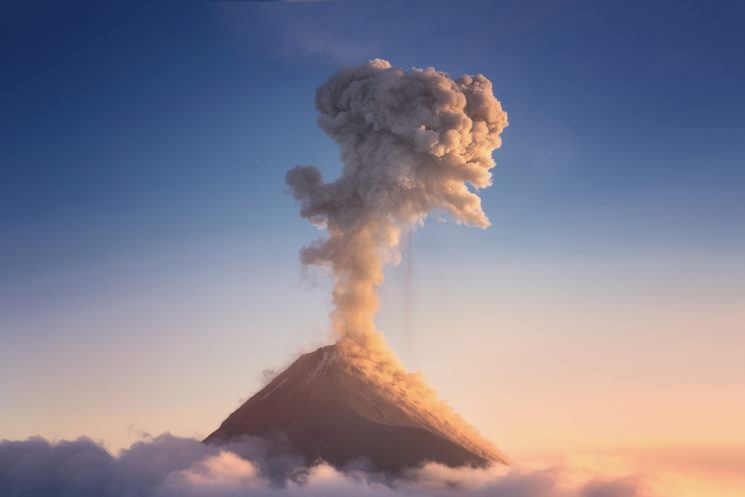 My research paid off and it all the elements i needed to create the shot I wanted happened. It’s a great feeling when things go as planned. When it began to get dark the real show started. The Fuego kept erupting and the glowing lava now became visible. The erupting sight was something you normally only see in movies. During the blue hour the volcano unfortunately stayed calm for a while. Blue hour is perfect to shoot the eruptions as the contrast between the sky and the lava isn’t that big yet. I figured that it would be much more difficult to shoot during pure night because of the big contrast, and I was right. 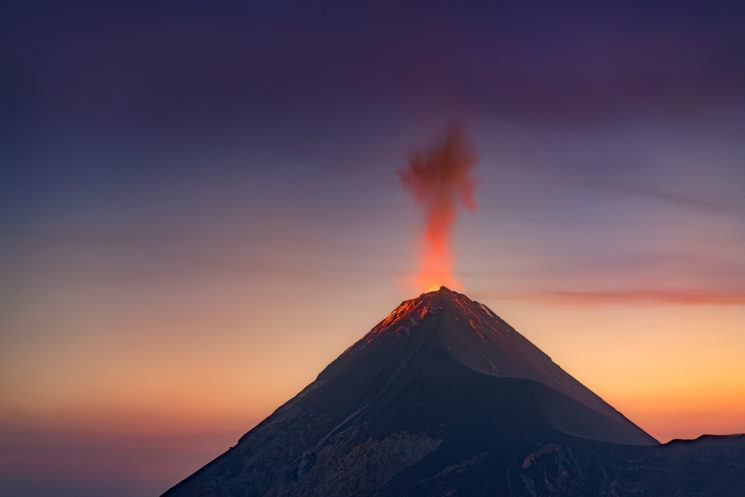 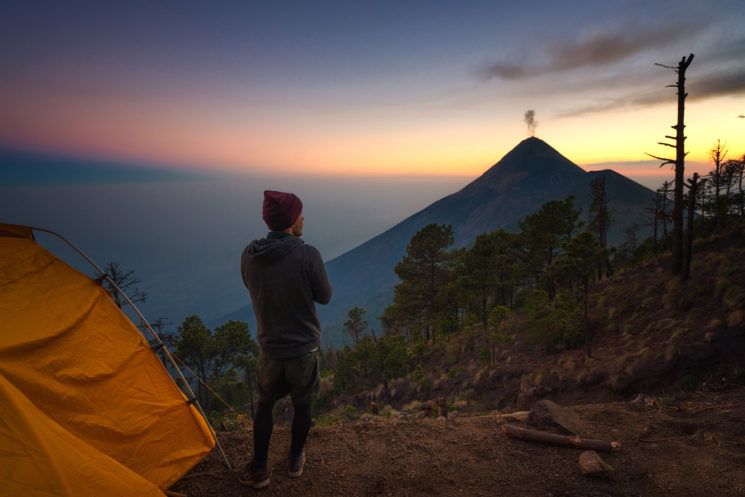 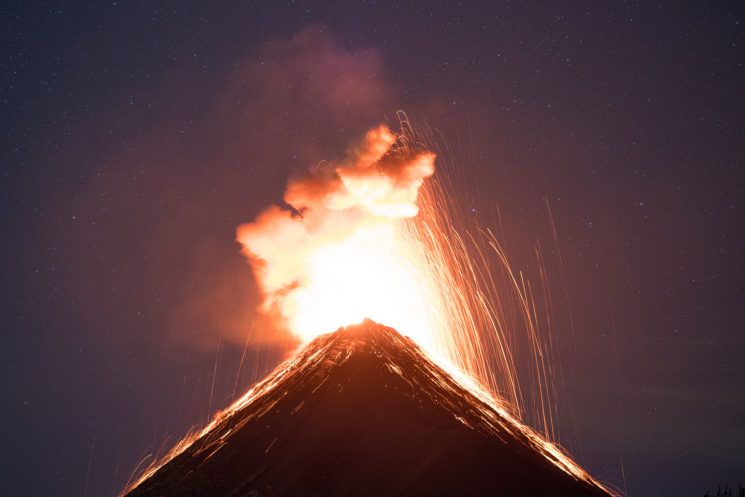 This is an example of the big contrast between bright lava and the night. It’s extremely difficult to shoot in a single exposure. The lava is overexposed here while the rest is very dark. For good close up shots with the milky way, I had to wait for the beginning of morning blue hour and hope for a good eruption. During that time, part of the milky way would line up with the volcano as well. 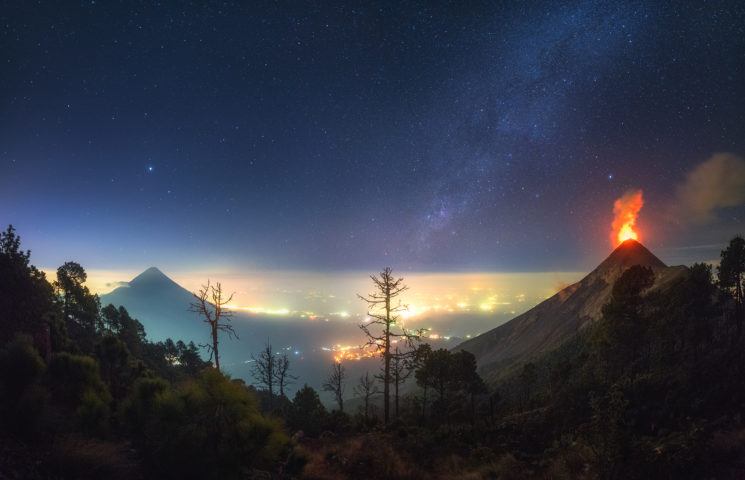 The night view was nothing short of spectacular. Seeing the Fuego erupt under thousands of stars is unbelievable. This is a panoramic shot from the view I had in front of my tent. The volcano on the left is a sleeping volcano called Agua. Funny how they called them right? Aqua, water. Fuego, fire. In between are little towns, one of them being Antigua where I was staying. Its interesting to see these towns do not cause that much light pollution into the sky. There’s some kind of haze layer blocking all the light pollution causing us to see a beautiful starry sky. I knew the best part of the milky way would align with the valley in early morning, but I already found this view amazing.

I kept shooting for a while until I decided to get some sleep in my tent. I think it was around 10 PM While it was around 30 degrees in Antigua during the day, up around 3500m it was below zero degrees Celsius. Even though I was prepared it was still extremely cold. I didn’t get too much sleep as the volcano kept erupting causing loud explosions every time. I woke up around 2 AM for more shooting. As planned, the milky way stretched over the valley

Although all of this was amazing, I wouldn’t be me if I still wasn’t 100% satisfied. As I mentioned before, I wanted a close up of the erupting volcano with the milky way. I knew it could be done that morning. I put camera in position for the early blue hour when the milky way would still be visible. At that time, a very faint moon was also up in the sky giving me some extra light. I set everything up and waited for the right moment. I just needed that right eruption. 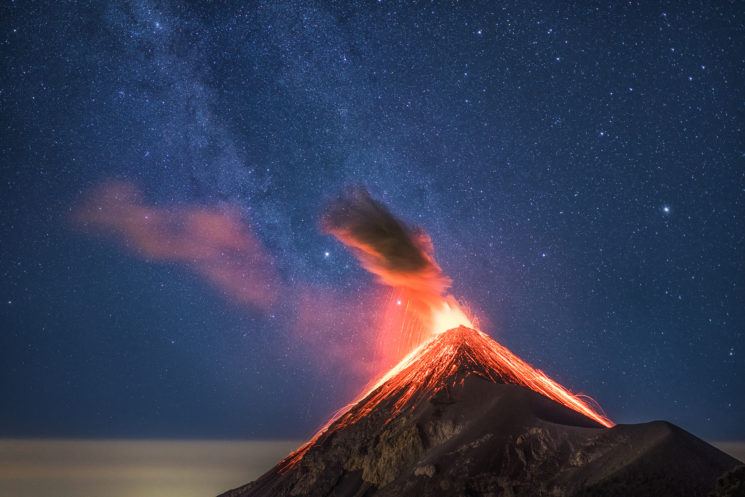 And then it happened. A perfectly timed shutter with the milky way in place. When I saw it on my camera screen I couldn’t believe my eyes. The satisfaction that you get from succeeding in taking an almost impossible shot is hard to describe. Having the shots I wanted I enjoyed the upcoming sun not too long afterwards. I didn’t shoot too much anymore as I was just enjoying the moment. After the sun was up the Fuego treated us a final goodbye show with nonstop eruptions that caused the whole valley to be covered in smoke and ash. 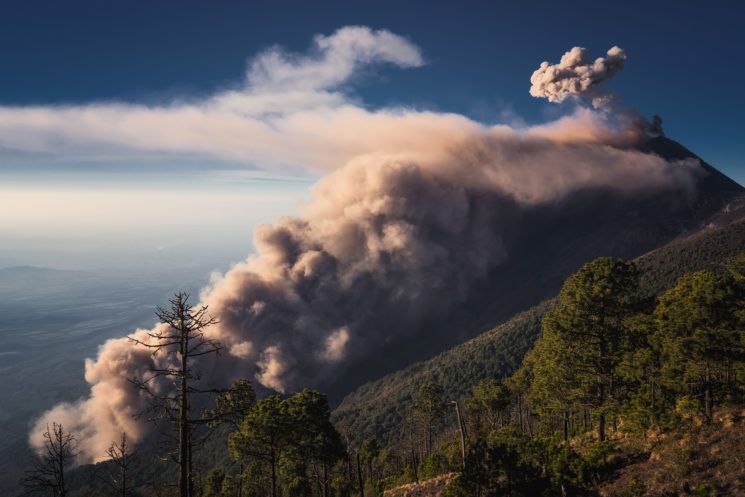 All of the images you see here still don’t do justice to the reality. Seeing the volcano erupt at night is one of the most beautiful things in nature I have ever seen. 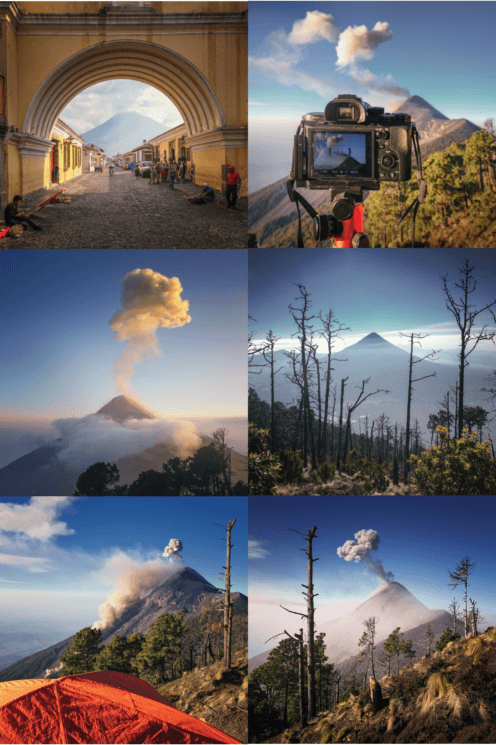 Albert Dros is an award winning Dutch landscape photographer; His work has been published by TIME, Huffington Post, Daily Mail, National Geographic and more. He is addicted to landscape photography and capturing the beauty of the world. You can find out more about him on his website, follow his work on Instagram and Facebook or reach out to him through Twitter. This article was also published here and shared with permission.

These aerial photos and video offer a jaw-dropping view of the erupting Fagradalsfjall volcano
« DSLR Audio: Aputure A.lav vs. RodeLink Filmmaker Kit vs. Rode VideoMic Pro
This is what 20 fps shooting looks like on Sony A9 »