WPPI is a wonderful occasion for many photographers who have the opportunity to attend. It’s a time to meet up with old friends and meet new ones whom you’ve only spoken to before online. It’s also a place to learn and to teach.

At this year’s WPPI, Keydrin Franklyn and Sam Serrato decided to hold their location lighting workshops just outside of Red Rock Canyon. The plan was to find a good location and teach & shoot for 8 hours. So, they hired a few local models, and one of the attendees even got in front of the camera to get a new profile photo.

Keydrin shared a number of images with us that were created during the course of the day, and how they were made.

The first image was an early morning shoot of one of the attendees who wanted a “dope profile photo” for use on his social media. A good teaching moment, Keydrin obliged. The image was shot at around 9am, with the sun still low in the sky making long sideways shadows. 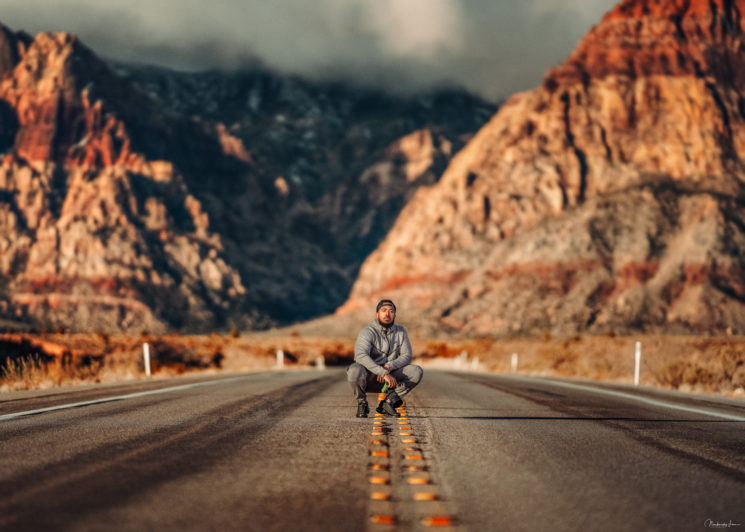 The setup for this one was quite simple. The image was shot with a Sony A7RIII and Sigma 135mm f/1.8 Art series lens. Despite the sun being quite low, this is Las Vegas, so the ISO was at a low 64 with the shutter speed a fast 1/2500th to wrangle the morning daylight wide open at f/1.8. A Godox AD600Pro was used off-camera in a CheetahStand QSB-26 softbox, graciously held by Ben. Several spotters were used to make sure that no traffic was coming from either side of the road. 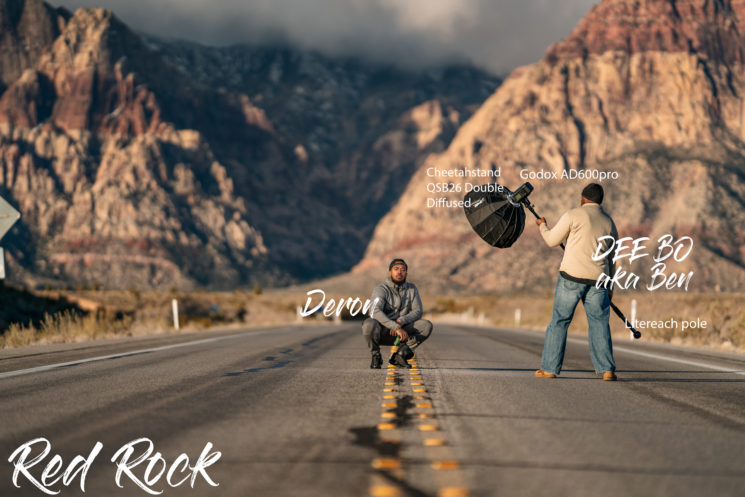 Keydrin says that this was a tricky shot, as it requires multiple images to be shot, and then composited in post. This is due to the fact that the AD600Pro in its softbox needs to be quite close to balance out the power and still give a soft appearance on the subject. Keydrin’s covered how he does this technique in a previous video on his YouTube channel.

A little later in the day, around 1:20pm with the sun high in the sky, the models started to make an appearance in front of the camera. The only thing that changed with regard to the gear with this shot was the shutter speed. Here it was ramped up from 1/2500th to 1/64000th to further bring down that bright daylight sky. The AD600Pro inside the QSB-34 softbox was placed to camera left, to balance out the sun, handheld by Carterseye. 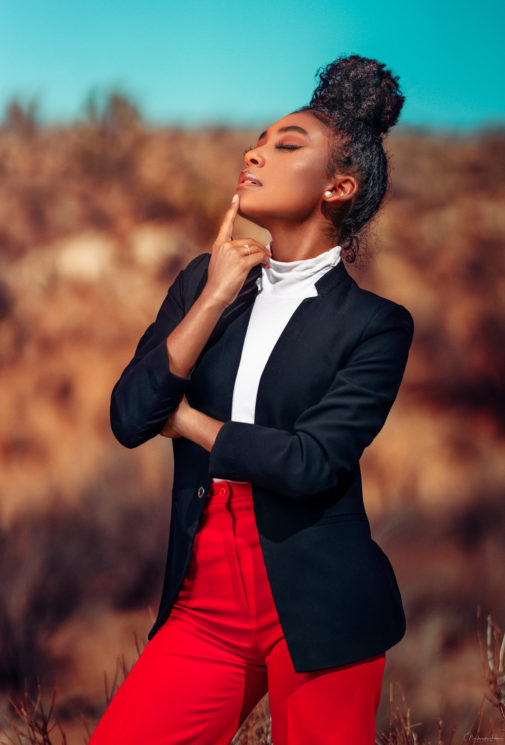 Not too much later than the previous shot, it was Tyler’s turn in front of the camera. For this shot, Keydrin saw some beautiful rocks with a mountain just peeking up behind.  So, he sat her there and decided to go wide angle for this one with the Sony 24mm f/1.4 GM lens. 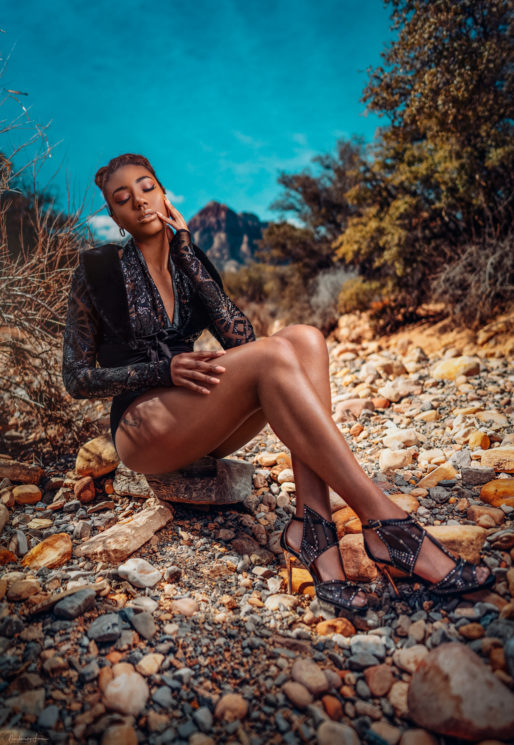 Again, the AD600 Pro was used to camera right to create a soft key inside the 36″ Glow Parapop with a scrim to help block some of the harsh sun coming from slightly behind, high in the sky. 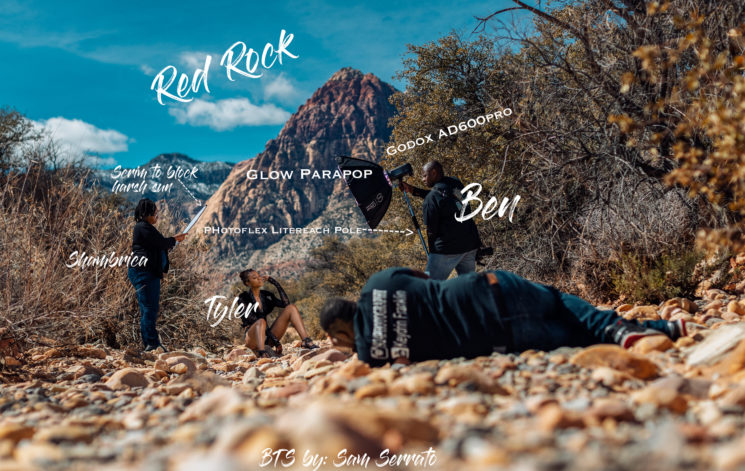 By 2pm it was time to bring the Sigma 135mm f/1.8 Art back out. The AD600Pro was also placed back inside the CheetahStand QSB-34 softbox for this shot, too, placed to camera left. Again a scrim was used to camera right to help diffuse some of that harsh hard sunlight. 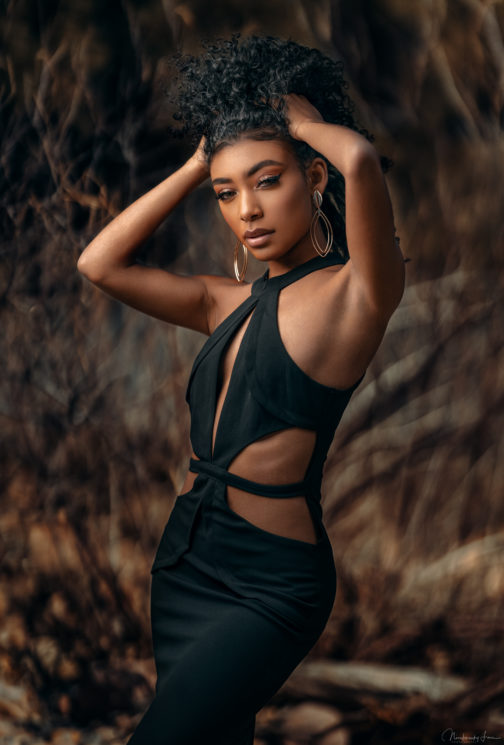 For the final shots of the day, it was Kiia’s turn in front of the camera. The sun, again, was behind the subject, scrimmed to help diffuse things as it was peaking through her hair. Again, the Godox AD600Pro was used inside the QSB-34 just slightly to camera right. 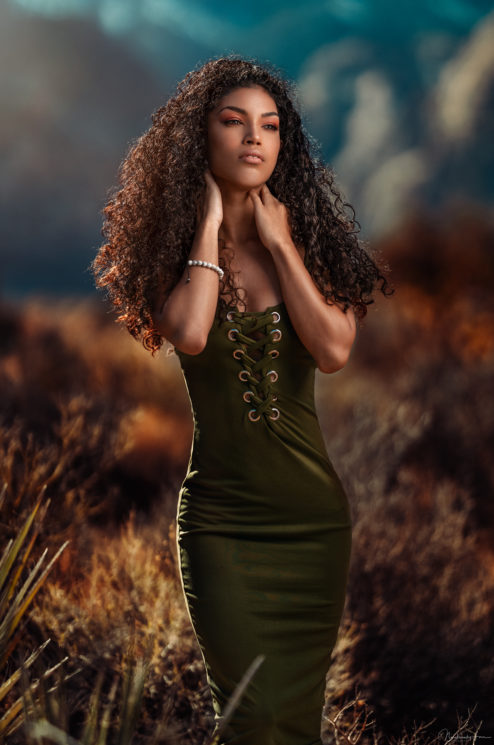 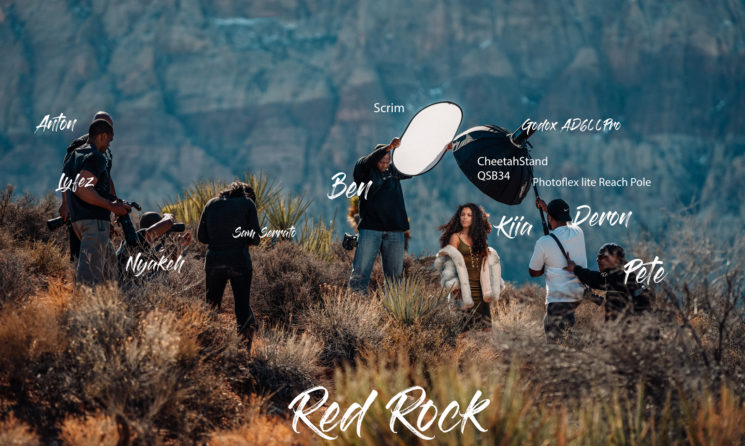 It’s always fun to see what goes on behind the scenes in order to create a photograph, and it’s great to see a group of people both learning and working well together in order to achieve some great images.

Meeting up with other photographers to shoot in new places is one of my favourite things about going to shows. I’ll be doing it this coming week at The Photography Show, and I’ll be doing it next month in Las Vegas when DIYP heads over for NAB.