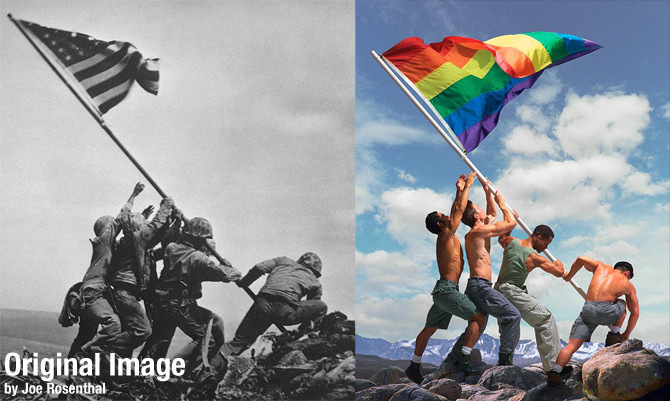 For those just now crawling out from under a rock, the United States has been an open battleground since last week’s Supreme Court decision legalizing same-sex marriage nationwide.  The Right is attacking the left and saying our doom is upon us; the Left is rubbing it in the faces of the Right.

Ten years ago, Los Angeles photographer Ed Freeman took a photo symbolizing gay pride.  The photo recreated the pose of the iconic Raising of the Flag on Iwo Jima taken by Joe Rosenthal during the Battle of Iwo Jima in 1945, replacing embattled Marines with shirtless men and swapping the American flag for a rainbow flag.

After the Supreme Court decision, Freeman shared the image on his Facebook page, a move which sparked great controversy, including death threats. 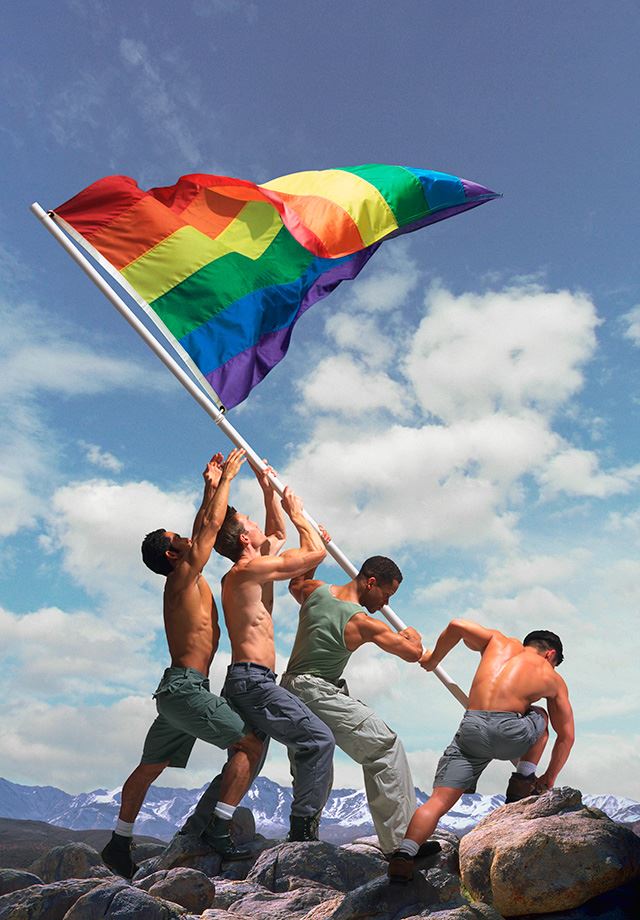 Freeman posted the photo on June 26th with the caption, “When I took this picture almost ten years ago, it never, never occurred to me that it would someday come to symbolize the victory we are celebrating today. Congratulations to all of us!  Love to you all.”

It didn’t take long for comments to start pouring in.  Comments like, “You are disgusting and nothing but a low life photographer,” “this pic has no business being in existance [sic],” and, “Disrespectful, Disgusting POS photo…no sympathy for the gays or their cause after seeing this…rot in Hell!!!” began flooding the post.

According to the Washington Post, Freeman also received death threats over the image.

One commenter echoed a sentiment that was seen frequently on the post:  “To use this picture is insulting to veterans, you guys need to pic [sic] something else. You cant compare the lives and sacrifice the Marines paid in Iwo Jima to that of gay marriage victory in court. As a veteran and a man I support gay marriage, but not this, so I would thank you if you take down.”

But, Freeman claims that he was not equating the gay rights struggle with the sweat and blood that cost the lives of nearly 7,000 Americans in that single battle.  In an interview with the Washington Post, Freeman states:

“The principle complaint that people have is that I am equating the gay struggle with the contribution and sacrifice of American servicemen.  But there is no equal sign here. This is not meant as a sign of disrespect. For God sake, no. I totally support people in uniform. There is no comparison going on here. The comparison is going on in people’s heads, and they’re spoiling for a fight. They’re already on edge because of  the gay marriage decision.”

As others have pointed out, the original image is one of the most copied and parodied in history.  And, while there are many times parodies have drawn sharp criticism, why is this particular image taking so much flak?

The issue of gay rights is a giant hotbed right now.  But, regardless of your take on it, the men photographed raising the flag on Iwo Jima fought for the liberties of a free society.  Now, what each individual thinks those liberties should be is a different story.