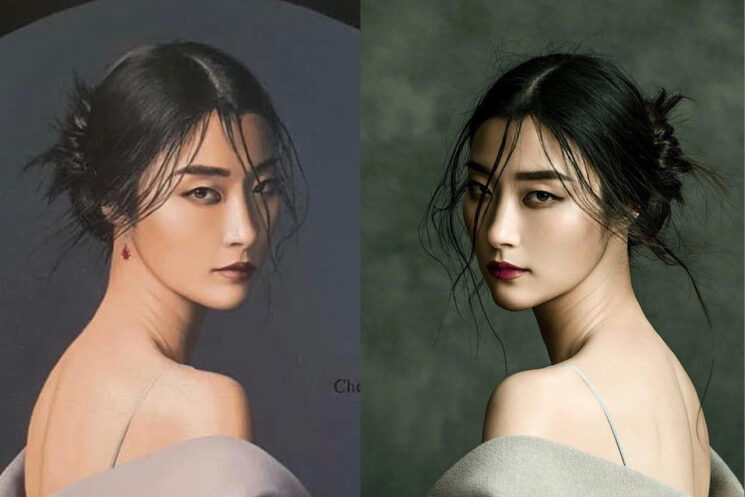 Photographer Jingna Zhang has lost her case accusing artist Jeff Dieschburg of copyright infringement. The Luxembourg courts ruled on December 7th that the artist was not infringing on Zhang’s work due to “insufficient originality in the photo”.

Jingna Zhang has responded to the ruling, saying that she is “devastated by the copyright ruling in Luxembourg today, which stated that my work lacks originality and therefore will not receive copyright protection in Luxembourg.”

The original photograph was taken by Singaporean photographer Jingna Zhang. The story blew up when she noticed Dieschburg’s image when he exhibited the work at the Strassen contemporary art biennial at the end of May. The resemblance is obviously striking, with the artist even admitting that he used the photograph as a reference image.

The two were unable to come to an agreement over the matter, and Zhang decided to take the artist to court over the matter. Unfortunately, yesterday’s ruling did not favor the photographer.

“The basis of the judge’s ruling was that the model’s pose in my photo is not unique. But how can a photo’s copyright be based on a pose alone?” writes Zhang. “If having a unique pose is the premise for copyright protection of an image, then nearly all portrait works in the world will not have copyright protection.”

That’s a very good point. The creation of a photograph, particularly a portrait, requires so much more than just having the subject sit in a certain position. The lighting, colors, props, and styling, all come together to create the whole image.

This ruling effectively allows anyone in Luxembourg to freely and openly exploit, sell, license, and use my work without permission or respect for my rights, despite recognizing me as the copyright holder of my work.
This simply goes against the very principles of copyright law.

The very fact that Zhang has lost this case in such a blatant infringement really makes a mockery of existing copyright laws. She has vowed to appeal the court’s decision saying that the decision is “not only an injustice for myself but a worrying danger for the entire art and photography community.”

I am devastated by the copyright ruling in Luxembourg today, which stated that my work lacks originality and therefore…

In these times of AI scraping the internet for artists’ and photographers’ work and replicating their styles, this is probably not the first time we will see such cases. Of course, this is not AI but a physical human that really should have known better. But the fact remains: copyright protection is perhaps not as bulletproof as we are led to believe.

Zhang caused a stir last year when she revealed her intentions to quit fashion photography because of racism in the Western fashion world.

« Leaked photos show Laowa to release 19mm f/2.8 ultra-wide lens for GFX on December 13th
Watch: Five topics broken down to help you film yourself outside on location »