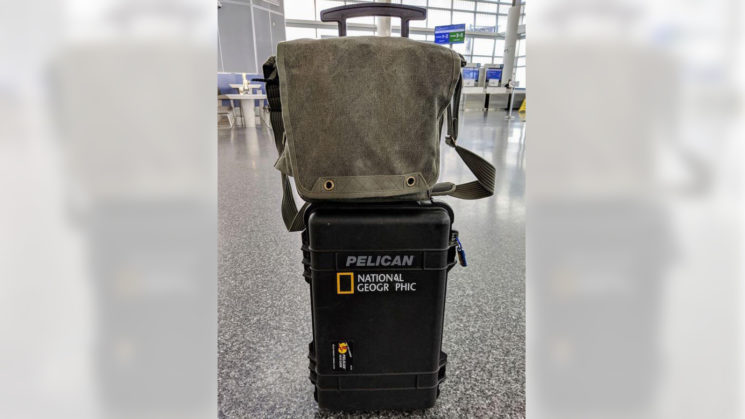 Pelican cases are a good choice for protecting your pricey gear while flying. But one such case recently caused a series of unpleasant situations for photographer Antonio Kuilan. The airport security stopped him three times at Houston Airport, and all three times he raised suspicion because of the Pelican case in which he carried his gear. We spoke to Antonio about this case to hear more, and we learned that he wasn’t the only one who had this experience.

While he was waiting in line for a connecting flight, Antonio was cherry-picked by a woman from the airport security. He replied that it was, and the woman said: “Oh no sir, you need to go thru another security check upstairs.” When Antonio asked why, she replied that the dogs on her floor couldn’t smell through Pelican cases.

So, the photographer went upstairs for the additional security check. As he was trying to find his way “through a labyrinth of directions,” he was surprised by another check. “An agent came out of nowhere and put his hands on my chest,” Antonio explains. This time, the agent asked him what he had in the case, and Antonio explained that, other than clothes, he also had “batteries, lenses, chargers, a drone, and other sensitive stuff.” But this was not the end.

According to Antonio, at this moment another agent came down the corridor, asking him why he was using a Pelican case. “Because I thought it was a good idea to protect my stuff with a rugged case that’s designed for carry-on,” Antonio replied. However, the agent told him that he was being “a smart-aleck with that attitude.” Antonio added that he was just answering the question.

When he finally made it to the security check upstairs, Antonio explained to the agent that he was sent there. He told him about “the mini-adventure” he had, but the agent simply told him to take off his shoes, belt, throw all his stuff in the bins, and walk through the X-ray machines.

I asked Antonio if this was the first time something like this happened to him. He told me that it was – but it was also the first time that he used a Pelican case. As a temporary solution, he will try to mask the “Pelican” name/logo with stickers or gaff tape and hope that he won’t go through an “adventure” like this again.

Antonio posted about his experience on Reddit, where many users pointed out that they went through the same or similar situation, and on different airports. User ericb67 writes that he got stopped and searched “every single time at every single airport and almost every port of entry.” Similarly, Xaved writes that his Pelican case “almost always ends up with one of those ‘your luggage was opened for inspection’ slips” when he lands.

Some comments on Reddit point out that, other than photographers, Pelican cases are also often used by gun owners and military personnel. Therefore, this factor is the likely cause of agents’ suspicions. Have you had any similar experiences?

« Shooting with a 50 year old, $100 lens on a $6K camera
How Photograph Flowers Splashing in Milk with an Infrared Laser »