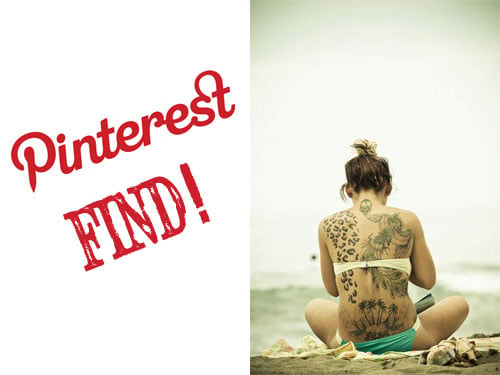 A few weeks back we shared Guy Prives‘s story where he took a picture of a beautiful tattooed girl on the beaches of Costa Rica, but could not sell the image because he lacked a model release.

Being a great photograph, Guy, took an interesting initiative to finding his model, affirming that at-least on our connected world everybody is no more that 6 degrees of separation from anyone else.

Guy harness the power of social media to try and track the girl, using that single image image of her back. Posting on social networks, blogs (even here on DIYP), Facebook and tattoo forums.

Finally, a girl recognized the back from a picture on Pintrest and helped Guy to make a connection. It turns out her name is Bri and she does indeed live in Costa Rica where she works in a bar. Guy made a contact via facebook.

Out of curiosity I asked Guy what kind of message he sent, It turned out it was the simplest letter

This simple message started a dialog and Bri agreed to sign the model release.

For me, the moral of the story is that we are way more connected that we thought we were. But also, that it pays of to be persistent and kind.

Celebrities are sharing photos for different social media in this viral meme format, and it’s hilarious

« Make A Dashboard Camera Mount Using A Peanut Sponge
Behind The Scenes: Black Light. In The Dark. In A Pool. Over Water »