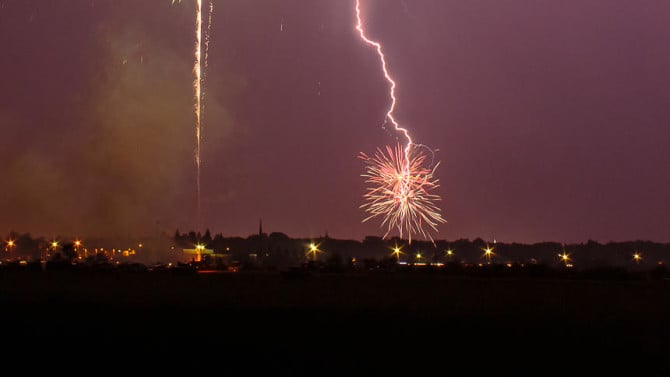 We Americans are always looking for any excuse to blow things up, whether figuratively or literally.  Once a year, though, we have a legitimate excuse to get explosive, and every Fourth of July the skies light up with “the rockets’ red glare.”

Mitch Axness, a system support specialist at North Dakota State University, describes photography as a “serious hobby.”  While photographing the fireworks display at Devils Lake, ND, Mitch captured a once-in-a-lifetime image as a bolt of lightning reached out to meet an exploding rocket.

Using a Canon EOS Rebel T4i and a kit lens, Mitch set up to shoot the display.  Dialing in at ISO400 and f/11, he describes how the 8-second frame turned into an amazing photo.

“It also sprinkled occasionally and I had thought about leaving, but the sprinkles were very light and eventually quit. The show went on as normal, and I took many standard shots and, with an 8-second shutter speed, wouldn’t always fully pay attention when the shutter was open. This image was captured during one of those times; I don’t remember what I was looking at but I didn’t see the lightning strike in the photo. It wasn’t until the image appeared in the preview that I saw what I had captured, and gave out a ‘whoa’ (and probably a few expletives) in celebration. I tempered my excitement thinking that maybe the image wasn’t in focus or that there may have been some camera shake, which once I got it on my laptop saw that wasn’t the case.”

The following day, Mitch sent the image to a local media outlet who runs weather images during their newscasts.  He thought his 10-year-old daughter would be impressed to see her dad’s image on the TV but was not expecting it to be as big a hit as it was.  “I had no idea it would catch on and spread the way it did.”

What’s the most exciting or unexpected image you’ve captured during a fireworks display?  Share it with us in the comments!