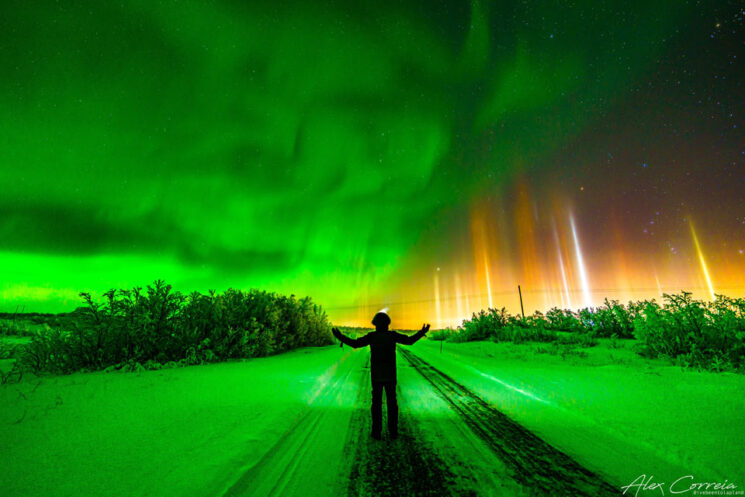 It’s not every day that you manage to photograph a selfie with not just one, but two types of unusual night sky phenomena. That is exactly what happened when Brazilian photographer Alexandre Correia captured this incredible image that includes both the aurora borealis and light pillars.

Correia captured the image near Kautokeino in the far northern part of Norway in early February. The image was captured in a single exposure and it was truly a once in a lifetime image, and he even managed to include himself.

“A couple of hours before the full darkness, I decided to put on some extra clothes and better socks as well as a heating belt for my lens to avoid freezing,” Correia told Petapixel. “I was taking pictures most of the time looking to one side as the lights were stronger but then on my way back I noticed the city lights shaping like light pillars and I saw a great opportunity to take a unique picture.”

“That day was -37°c and felt like -41°c,” Alex says.  “A light pillar is an atmospheric optical phenomenon in which a vertical beam of light appears to extend above and/or below a light source. The effect is created by the reflection of light from tiny ice crystals that are suspended in the atmosphere or that comprise high-altitude clouds.”

It is an absolutely remarkable image and just shows how spectacular nature can be. You can see more of Alex’s images of Lapland on his Instagram.