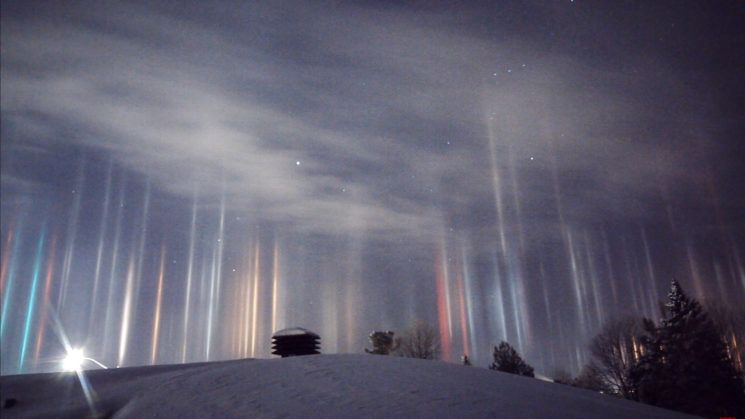 Beam me up, Scotty! At least, that’s what photographer Timothy Joseph Elzinga (AKA Timmy Joe) thought when he was woken up by his 2 year old son at 1:30am and saw this through the window. Being based in Canada, Timmy initially thought these were actually the Northern Lights. What was odd, though, was that they seemed to be emanating from the ground. He says they were “blasting hundreds of feet into the air” while shimmering and moving.

To further investigate, he went outside and grabbed a little footage with his phone. He also saw his neighbours out looking at the strange lights in the sky. Now convinced that it’s the Northern Lights, he gets into his vehicle to head areas free from light pollution. Upon seeing them disappear, he heads back home, where they’re still shining brightly in the sky. He later finds out they’re called light pillars. Caused by light shining off ice crystals suspended in the atmosphere.

An incredible and unique sight to see, with flashing beams of light in the sky mirroring light sources on the ground. The light source can also, occasionally, come from the Sun itself, or even the moon when they’re very low on the horizon.

The ice crystals in the air position in such a way that they directly reflect light on the ground back toward you. This is why they show the colour of the light source on the ground. They’re basically thousands of tiny mirrors falling through the sky. The larger the crystals, the more pronounced the effect. 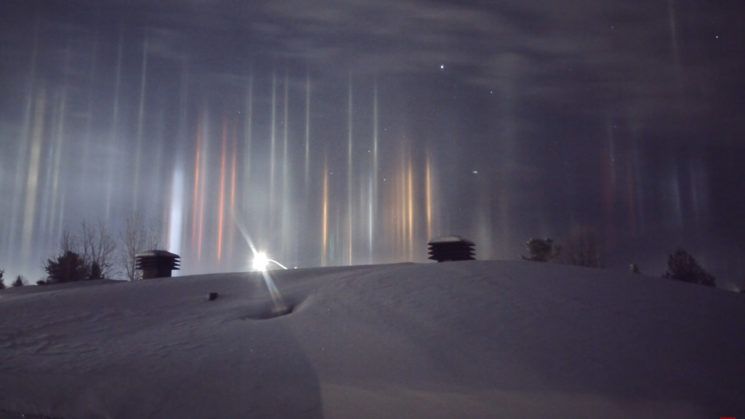 It looked like someone from Star Trek was trying to beam people up.

It was very bright in person, like nothing I’ve ever seen. It almost seemed supernatural.

Have you seen light pillars before? Did you have the opportunity to photograph them? Let us know, and show us some of your shots in the comments.

Incredible time-lapse captures supercells, tornados and double rainbows as they form across the Great Plains