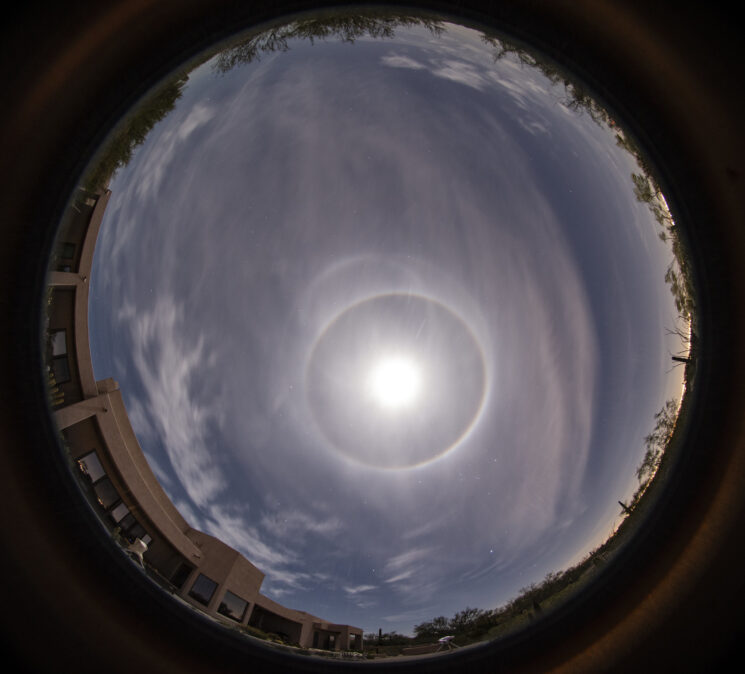 Astrophotographer Eliot Herman from Tuscon, Arizona was outside to photograph the partial lunar eclipse that was visible for part of the world in late November. The night was cloudy, however, and Eliot didn’t manage to capture anything that he was particularly proud of. Aside from this unbelievably rare image of 3 halos surrounding the moon that is!

Herman used a Sigma 8mm fisheye lens with his Nikon D800 to photograph the moon. “Tucson had clouds and haze that resulted in a Lunar halo forming and disappearing,” he writes on his Flickr feed. “My telescope photos were decent of the eclipse but I was disappointed with the haze and clouds during the eclipse,” he says, “but this certainly made lemonade out of the lemons.”

Apparently, the moon was so bright that night that Eliot couldn’t see the 2 outer halos with his naked eye, those only became apparent when processing the images.

The photo shows a 360-degree view with one bright ring around the moon. The second ring runs through the moon, and a set of arcs connect the two. To have all three phenomena appear together in one photo is incredibly rare.

This rarity was confirmed by Astro-phenomena expert Les Cowley who further explained what we can see. He says that when the moon (or sun) is high, as in this case, it is not uncommon to see a circular halo around it. This is called a circumscribed halo. Les goes on to explain that the smaller halo passing through the moon is a paraselenic circle, the lunar equivalent of a parhelic circle.

The fainter halo joining the other two is the really, really rare one. It is a Parry arc. That is rare enough. But only at the particular altitude of the moon when the camera fired does it touch both halos. Parry arcs are generated by hexagonal column crystals that do not rotate about their long axes. A unique photo!

It is indeed a unique photo. Eliot stacked 11 images together to create an even clearer version, seen below. 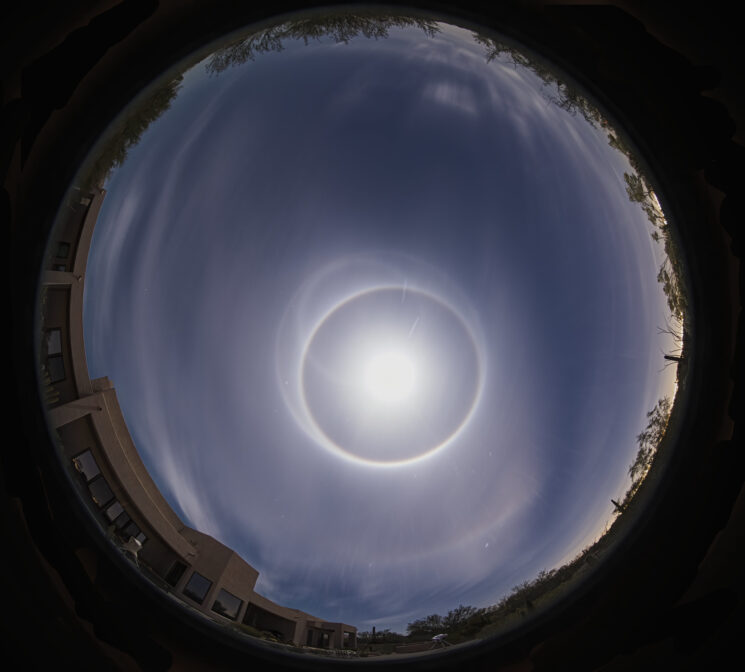 Hopefully, after sharing this unusual image Eliot is no longer disappointed with his shots from that night! It always amazes me what the camera is capable of capturing that isn’t visible to our human eyes. Perhaps that’s why astrophotography will never cease to be fascinating.

Have you ever witnessed this kind of phenomena?