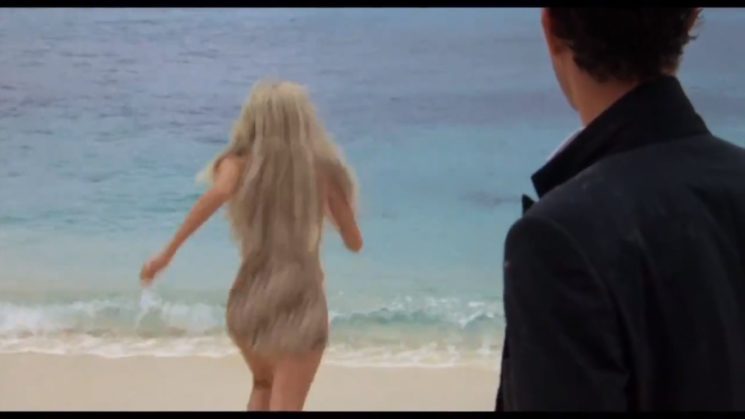 Poor Photoshop and CGI work may be called “a fail,” but hey, at least it never fails to make us laugh. Disney recently came under fire over a lame CGI work they did in Splash. The 1984 movie can be streamed on Disney+, but it comes with a terrible cover-up of Daryl Hannah’s butt.

The problematic scene shows the moment when Hannah kisses Tom Hanks, turns around and runs into the ocean. In the original scene, you can see a glimpse of her behind as she runs away. In fact, it seems that Hannah’s wig is even stuck to her back to make sure that her behind stays covered as she runs. However, I guess it wasn’t enough of a cover-up for Disney, so they turned to CGI. And they did a pretty terrible job.

Disney+ didn't want butts on their platform so they edited Splash with digital fur technology pic.twitter.com/df8XE0G9om

For comparison, here’s the original:

For the sake of comparison, here’s how Daryl Hannah’s wig is attached to her tuchas in the “theatrical cut”. pic.twitter.com/gUFYRlD7kP

Of course, people criticized this cover-up for a number of reasons. First of all, it looks awful, especially considering that it comes from Disney. Although, I think it’s still not worse than ABC’s attempt to “extend” bikinis in The Bachelor. But I digress.

Some people saw a bigger problem in this, which reminded me of Instagram’s nipple ban. You know how male nipples in photos are okay on Instagram, but female nipples need to be censored or the photos will be deleted? Well, looks like the same goes for butts on Disney+. A female one had to be covered up, while male ones are left untouched. Some users didn’t miss to point that out, too.

And of course, there were those who made good jokes out of this whole charade. My favorite kind of tweets.

At least they didn’t just erase the crack so she had one smooth cheek. pic.twitter.com/XKDqZKwvSE

Listen, I grew up watching Daryll Hannah’s butt running into the ocean and I’ll be damned if my kids don’t get the same experience.

Mermaids have hairy butts, pass it on

Anyways, I think there were plenty of better ways to pull this off. The easiest one would be simply cutting a few frames and avoiding all the fuss. Although, I still don’t get it why female butts are such a big problem, especially while male ones are left uncensored. If it were my decision, I wouldn’t censor either, but that’s just my two cents, of course. What do you think? How could this have been avoided?

How an Old School Photographer is Kicking Your Butt on Instagram