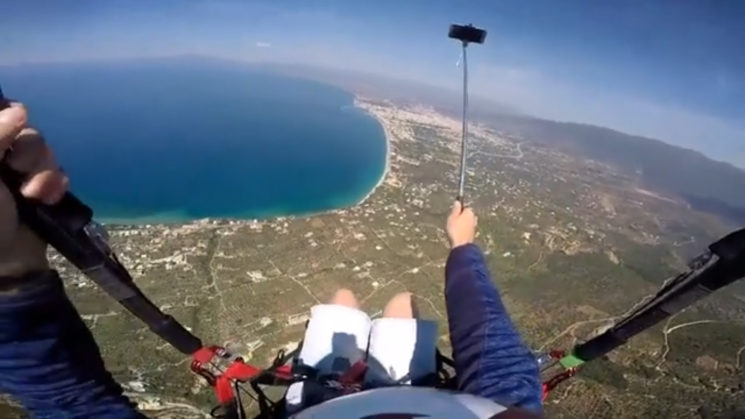 There you are, paragliding away at 2,500ft, so you whip out your phone to take a quick selfie. Who wouldn’t, right? Well, this one unnamed paraglider thought the same. Not only did he pull out his phone, but he also put it on the end of a selfie stick. After a few seemingly successful shots, he pulls it back in and as he removes the phone from the stick, it falls and plummets to the ground. From 2,500ft.

Is this the ultimate accidental phone drop test? The paraglider is also wearing a camera on his helmet, presumably a GoPro, but from this footage, once the phone slips, it’s impossible to spot.

There’s no information about who the guy is, where he was or whether he managed to find the phone afterwards. It looks like possibly a Samsung Galaxy S7. Let’s just hope he turned on the “find my mobile” service.

It also looks like maybe he was shooting video with the phone, rather than stills. So I’m curious to see how the footage from the phone looks. Again, assuming it survived the fall.

We may never know if the phone survived, or what it saw. But if you’re planning to do something like this, maybe try something a bit more secure. And perhaps add a little gaffer tape for good measure.

The Ultimate Guide to Water Drop Photography – A Book Review