There’s a group of people out there that are often ignored when it comes to photography. That group is the visually impaired. With photography being such a visual medium, it’s an easy group to ignore. That being said, I don’t think camera manufacturers are intentionally neglecting this group of users. At least, no more so than they ignore any other kind of impairment. Accessibility options common to other electronic devices have always been lacking from cameras.

Sony appears to be changing that thought process, though, building a screen reading feature into the Sony A7 IV. This video from Sam at The Blind Life, who lives with Stargardt’s Disease, walks us through enabling the feature and its current state of usefulness. It appears to be an “in development” feature, for the most part, but it’s a fantastic start that other manufacturers should take note of.

While a screen reader – which is essentially a text-to-speech engine to let you audibly navigate menus and adjust your settings – might not seem like a big deal to a lot of people, it will be a big deal to those ~12 million people in the USA over 40 that the CDC says have some kind of vision impairment. Out of those 12 million, around 4.2 million suffer from an impairment that cannot be corrected. And it’s estimated that 93 million adults in the USA are at high risk for serious vision loss. 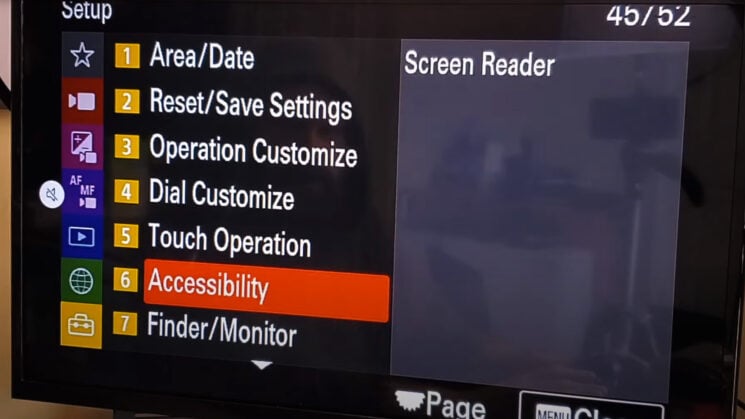 The Screen Reader functionality is enabled through the Sony A7 IV’s accessibility menu. If you struggle to see the menus in order to be able to set up the feature, you can do as Sam did in the video and connected the camera up to a larger display through its HDMI output to give you an easier view. Once it’s enabled, it will start to read out the menus you’re seeing on the screen and tell you what functions for that menu option are assigned to which buttons and dials. From here, you can adjust the speed of the voice as well as adjust the output volume.

As Sam mentions in the video, the system is not perfect. There are a number of functions and menus that it doesn’t tell you about just yet, hence the suggestion that it appears to still be in a state of development, that he hopes Sony will bring to the camera in a future firmware update.

As far as I can tell, this feature has not been implemented in any other Sony cameras just yet and I haven’t heard of Nikon, Canon, Panasonic, Olympus, Leica, Fuji, Sigma or Pentax including such a feature in their cameras before, either. But hopefully, this will be the start of a new trend that helps to make photography a little easier for a massive group of people around the world that might otherwise not even consider picking up a camera.

It’s a feature that the vast majority of us will never use, even if it’s implemented in every camera we own. But for those that will use it and need to use it, it’s a vital feature that’s been lacking from cameras for far too long.

One photographer’s biggest issue with the Sony system