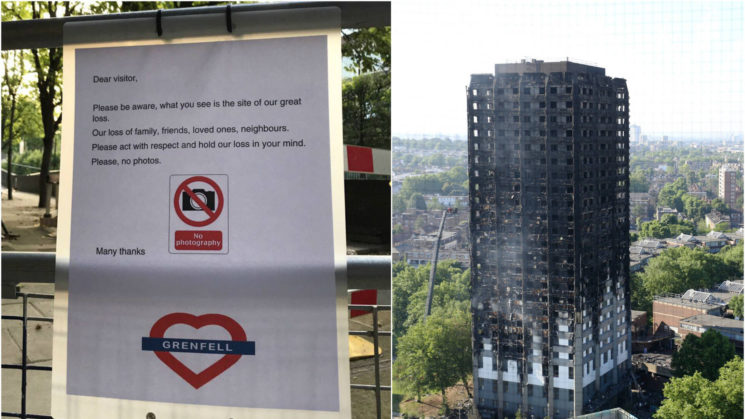 It’s been over 2 months now since the tragic fire at Grenfell Tower in North Kensington, London, causing the deaths of at least 80 people. Shortly afterwards, to the dismay of local residents, it became something of a tourist attraction. Attracting selfie shooters from afar. Visitors were then asked to refrain from this disrespectful practise.

This weekend is the Notting Hill Carnival, one of the highlights of London’s annual calendar. It attracts around one million people each year, making it one of the world’s largest street festivals. The carnival runs through Kensington, and visitors are again being asked not to shoot selfies with the tower. Only this time, the requests are being backed up by the Metropolitan Police.

LBC reports that Transport for London and the Metropolitan Police are working to protect the tower from Selfie takers. They estimate that this year there will be as many as two million visitors passing through for the carnival.

Many of the surrounding streets will be blocked off, with extra police in place to ensure that only residents can enter the area. Transport for London have also started putting up barriers along rail lines to obscure the view of the tower from the trains. They have also added automated messages at stations and on the trains reminding peopel to be respectful and not take pictures of the destroyed building.

We have made changes to our policing operation for this year’s Carnival to ensure that the local area around Grenfell Tower has extra officers on duty and protective barriers in place. This is to make sure that the security of the Grenfell Tower site is maintained and to protect the many items and memorials that have been placed near to Grenfell Tower.

I said this last time these requests were made, that people shouldn’t really need to be told to not do this. But, it is being said, in a much louder voice this time, thanks to police and TfL backing.

Notting Hill Carnival is a wonderful place to shoot photographs. If you don’t believe me, just search Google Images, Flickr or 500px, and you’ll see many great examples. So, if you’re heading there this weekend with your camera, please show some respect.