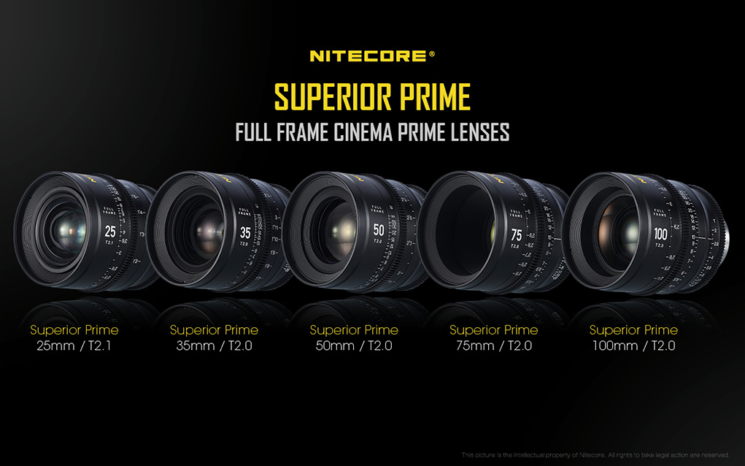 Nitecore is a Chinese company producing rechargeable flashlights and third-party batteries (including smart batteries no one asked for). But now it’s about to make camera lenses as well. The company has just announced five full-frame cinema primes ranging from 25mm to 100mm. They will be compatible with a range of mounts, and the company promises “optimum optical quality.”

Nitecore’s line of lenses is called Superior Prime, and these are the expected models:

According to the company, the optical design of this line of lenses provides “outstanding performance in terms of ratio and axial dispersion.” The company promises natural and pure color rendering and minimal purple/green fringing. There are no details on the coating type, except that it’s “unique.” Nitecore promises controlled dispersion while retaining details “to create low contrast and a stylized flare.” What’s more, the SP 75mm lens is specially optimized on the skin details in a portrait, according to the company.

Here are the specs as seen on Nitecore’s website: 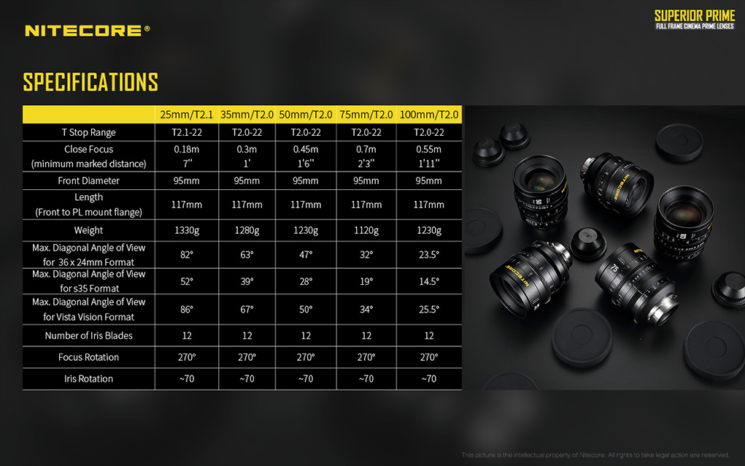 The company explains that all five lenses will be fully compatible with ARRI Alexa LF, Red Monstro VV, Panavision DXL2, SONY Venice, Canon C700 FF and “other film cameras to be released in the future.” They will be available in PL, Canon EF and Sony E mounts, Nitecore writes.

Although the lenses have been announced, there are still no details on pricing and availability. But we’ve reached out to Nitecore and will update the article as soon as we know more information. Hopefully, we’ll get to see some sample videos soon and decide whether or not these will be worth investing in.

« Canon’s “holy trinity” of RF lenses could be coming this week, these are the rumored prices
Gudsen’s new Moza AirCross 2 is an ultra light gimbal with 360° rotation on all axes and 7lb load capacity »