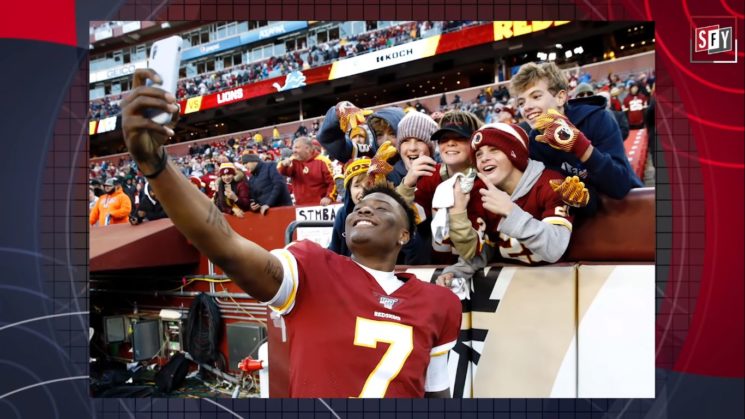 Washington Redskins quarterback Dwayne Haskins had his first victory NFL victory this Sunday. However, he missed the final play of the game because he was busy taking selfies with fans in the stands.

Haskins completed 13 of 29 passes for 156 yards in his third NFL start and lead the team to a go-ahead field goal with 16 seconds left. After this, an interception by Washington ensured the victory for the team. However, Haskins misjudged the time on the clock. There were a few seconds till the end of the game and the coaches were looking for him for a kneel-down. He was already out of the field, taking selfies with overjoyed fans, so backup quarterback Case Keenum had to take the final snap.

Dwayne Haskins takes a selfie with fans while Case Keenum has to do the victory formation pic.twitter.com/Y76AL2cquF

How do miss the last snap of a game because ur taking selfies. That’s unprofessional & wrong.

On the other hand, most fans seem willing to cut Haskins some slack. “No harm, no foul,” one tweet reads as a comment on Haskins’ selfies. “He is 22, a little immature, sure but it’s his first NFL win,” writes another Twitter user. There are a few negative comments, but most fans believe that he was simply overjoyed, plus he is very young and this is his first victory.

I love it ! He is a young man and was excited AND he was with the Fans. How often do we dog players for not being accessible. It did not cost the game or points or anything. This is AWESOME !

Haskins himself explains that he indeed was overexcited and thought that the game was over. “I was so hype, I broke a water bottle,” he told reporters as The New York Post writes. “I look up and we’re in victory. I thought the game was over with already, but I’ll get it next time.”

In terms of sports and dedication to the team, I also tend to see Haskins’ move as immature. I mean, missing the final play for selfies? But on the other hand, the young quarterback is just a human being, he was ecstatic over his first NFL victory, and the clock did show 00:00. Plus, there was no harm for the team, so the coach should probably let this one slip. But still, Haskins should use this incident to remember that the game always comes before selfies.

[via FStoppers; image credits: screenshot via Speak For Yourself]

« Photographers and filmmakers, don’t miss these Black Friday 2019 deals (bookmark as we constantly update)
NASA red number prints of the 1969 moon landing are up for auction, starting at $50 »