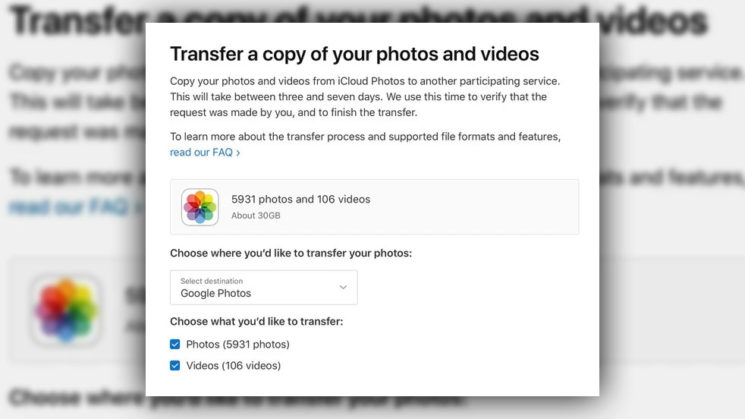 Apple has launched a new service that lets you automatically transfer your photos, videos and albums from your iCloud Photos library over to Google Photos. Transferring them does not remove them from your iCloud account, but instead sends a copy of them over, allowing you to use your Google Photos storage as a backup for your iCloud.

There are some caveats, though. While the usual .jpg, .png, .webp and .gif files will transfer just fine, along with some raw formats, there are other raw formats that cannot be transferred, along with shared albums, smart albums, photo stream content, live photos and certain metadata.

Apple has posted documentation to their website, explaining how the new feature works and how to do it. It’s a pretty basic process, though. Sign in to Apple, select “Transfer a copy of your data” and then follow the prompts. The web page also highlights some of the potential issues so you’re not too surprised if things aren’t transferred exactly the way you expected them to be.

About the photos and videos that are transferred

Only content stored in iCloud Photos* is transferred. Photos and videos are transferred either in the original format or in industry-standard formats that are easy to open and read. In some cases, you may find that the transfer didn’t include all the photos, videos, or formats that you expected and there are a few reasons why this could happen.

Your Google account’s total storage space applies to content transferred from iCloud Photos to Google Photos. Google Photos also has a limit of 20,000 photos per album. If you transfer an album with more than 20,000 photos, the additional photos are still transferred but are not added to the album.

At the moment, the service is limited to users in Australia, Canada, the EO, Iceland, Liechtenstein, New Zealand, Norway, Switzerland, the UK and the US. The process takes between three and seven days, which Apple says gives them time to verify that the request is by the legitimate owner of the iCloud account (and content) and to actually perform the transfer.

It sounds like kind fo a per-request deal and not a permanent automatic update. So, performing this function isn’t going to start automatically backing up all of your iPhone shots to Google Photos. You copy, it transfers what’s there (caveats notwithstanding), and then it’s done. If you want to update it in the future, you’ll have to do the whole transfer process again. Whether it just sends over the new files, or re-sends everything is unclear.

From the way it works, it seems it’s more a way for iPhone users to make the switch to Android devices without losing all of their photo and video content in the process (just some of it).

But if you want to check it out, you can read more on the Apple website.