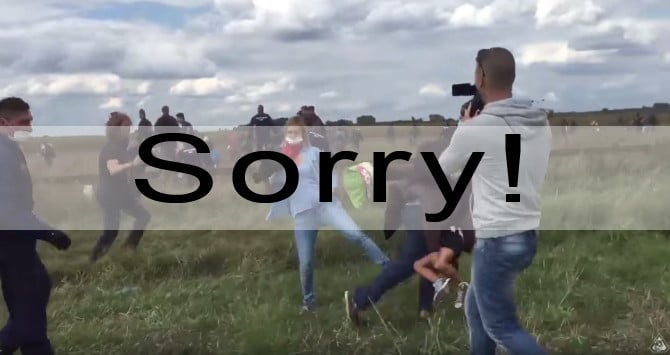 Sorry she did it or sorry she got caught?

Petra Laszlo, the Hungarian camerawoman who was filmed tripping and kicking migrants, apologized for her actions.

“I’m not heartless, racist children-kicking camerawoman”, she said, stating that she was driven by fear, adding that she does not deserve the “political witch hunt” against her.

Laszlo’s violent behavior made headlines worldwide and made her a symbol of the xenophobic response to Europe’s migrant crisis. Following the widespread condemnation of her actions she was fired from her job and an official police investigation has been launched.

The dismissed camerawoman began her letter, published in the conservative daily newspaper Magyar Nemzet, by apologizing for what she had done. She then went on to explain that she got scared when the migrants broke through a police cordon and came running in her direction.

“Something snapped in me”, Laszlo said. “I did not see a camera in my hand, who or who was coming towards me, I just thought that I was attacked and I have to protect myself. It’s hard to make good decisions at a time when people are in a panic”.

It is hard to understand how a person could react in such a way, but considering that several Eastern and Central European heads of state have spoken against the migrants, in addition to her working for what Associated Press called an “ultranationalist online TV channel” and is associated with Hungary’s far-right party Jobbik, it is not all that surprising.

“I’m not a heartless, racist, children-kicking camerawoman,” she concluded. “I do not deserve the political witch hunts against me, nor the smears or often the death threats. I’m just a woman, and now an unemployed mother of small children, who made a bad decision in a situation of panic. I am truly sorry.”

For those who missed it, the video below shows migrants running from police and Laszlo tripping one of them who was carrying a child. Another video showing her kicking a young boy and girl has been removed from YouTube.