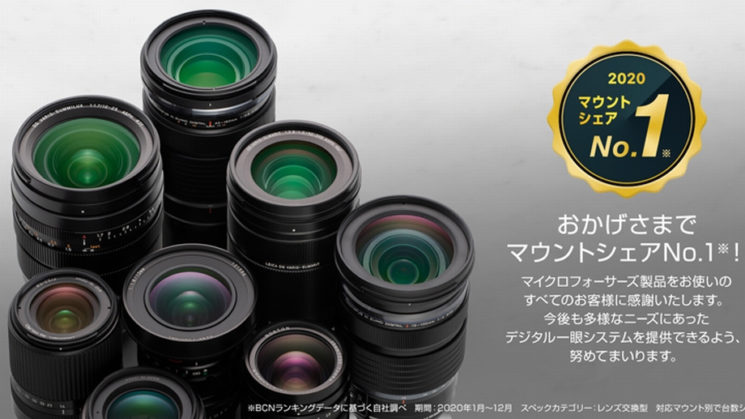 Well, there’s nothing like blowing your own trumpet in your first official press release since acquiring a new company. Digicame-info reports that OM Digital Solutions Co., Ltd. – the new name for Olympus Imaging Division since it was taken over by Japan Industrial Partners – has made an announcement proclaiming that Micro Four Thirds has the largest market share of any camera mount system in Japan.

Olympus launched the Micro Four Thirds system in 2008 along with Panasonic. A system which OM Digital Solutions says is now supported by over 56 companies. According to Today’s announcement, MFT has risen to the top, holding 21.7% of the domestic market in Japan. More than any other camera mount system,

We have announced the system standard and have endeavored to popularize this standard. In 2020, the 12th year, lenses in Japan, in the interchangeable digital camera market, we achieved the No. 1 share of the number of units by lens mount.

Micro Four Thirds enjoys video by enhancing the lineup unique to the joint standard and developing the system.

And further expanding the possibilities of utilization, there are currently 56 supporting companies including his BtoB company. In 2020, four new mirrorless interchangeable-lens cameras that comply with the Micro Four Thirds system standard have been introduced to the domestic market.

We have endeavored to revitalize. As a result, in 2020, the number of top lenses * 3 by lens mount in the domestic market will be changed.
A, we achieved 21.7%.

As a company that proposes system standards, we will continue to expand our lineup to meet the diverse needs of our customers.
We will provide an eye system.

The reported 21.7% is based on BCN’s sales and ranking data covering January-December 2020 of interchangeable mount camera systems by the total number of units sold based on lens mount type.

Being the top selling camera system in Japan certainly seems a far cry from the “Micro Four Thirds is dead!” proclamations I’ve heard all over social media recently. And perhaps JIP really is serious about pushing the Olympus/OM-D brand and Micro Four Thirds system as they promised a few months ago.

Of course, they have to shout about it. They have to build up the hype now that they own the company and see how many bite. Exactly how well they will stick to that promise remains to be seen, although they do state in the above announcement that new stuff is on the way.

Personally, I’ve become a big fan of the Micro Four Thirds system (although more the Panasonic side than the Olympus one), so I hope the format does thrive once again. Panasonic seems to have mostly neglected it the last couple of years and Olympus… Well, maybe under new management it’ll find a way to survive.

OM Digital Solutions to launch “many” new products in 2021