When I first saw the Deity Connect Interview kit at IBC 2019, my eyes lit up. Seeing wireless solutions for interviews packed neatly into a box, I knew that this kit would be something to look at. The enormous list of things that his kit to do is amazing. Two transmitters, one receiver, internal recording for backup, adaptive frequency hopping, and rechargeable. And now, we finally have it- It really is an amazing solution.

There is one big question you ask yourself if you want to buy a wireless audio solution. UHF or 2.4GHz. Let’s get this out the way right now. The Deity kit is, in fact, a 2.4ghz system. But before you ditch the article, I recommend you read it until the end. Spoiler alert: It’s worth it!

Before I get into the actual review, I noticed something weird that I want to share. Looks like there is something going on with the audio we recorder from the Deity Connect. While it records two channels, they were recorded with inverted phases. I am not sure yet if this is coming from the Deity or from our workflow. BUT! if you use a mono speaker that merges those two channels, the phases cancel each other and you get a thundering silence.  Here is a close up of the two channels on the video. They are not 100% mirrored because they have some music overlay, but you get the idea. 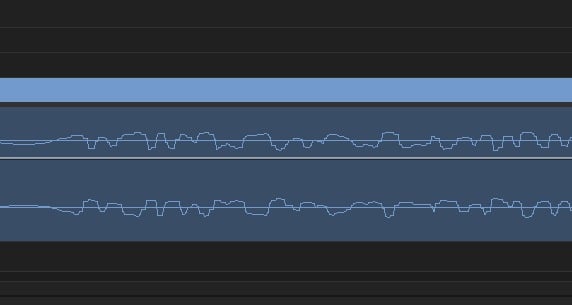 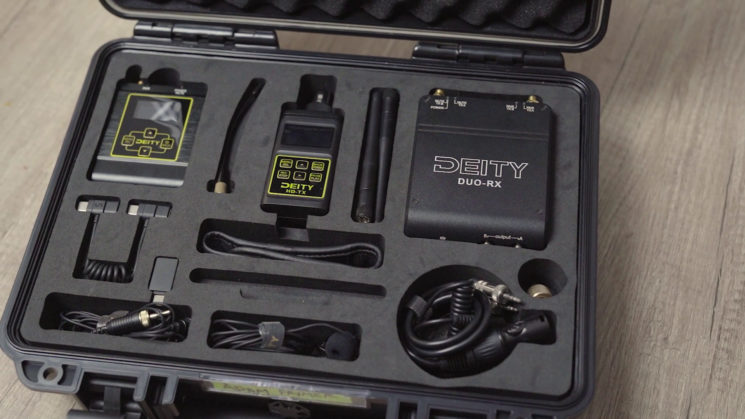 So, the list of things included in the box is enormous. The big things included are the HD-TX, the BP-TX, and the RX Receiver. Also, you have all the cables you would need to operate. You have multiple attachments, such as a velcro strap or a hot shoe mount of the receiver. You also get multiple output cables for the receiver. More on that later. The contents are neatly packed into a sturdy pelican-style case. The precut EVA foam inside makes the kit feel really premium.

The first thing you notice when you look at the devices is the beautiful build quality. All of the devices are made of brushed aluminum. They have nice tactile buttons with great feedback. Each of the units has its own special sauce. So let’s talk about what each of them can do. 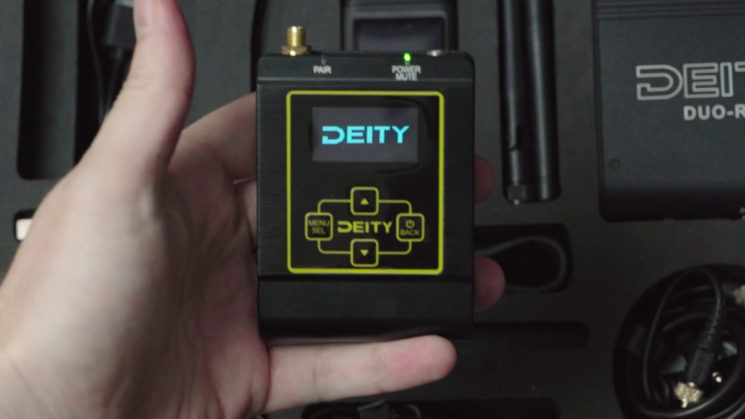 The BP-TX, or Body Pack, has a screwable 3.5mm jack for a lav, and a place for an antenna. Fun Fact, you can actually use one of the receiver’s antennas if you’re only using the bodypack to get a stronger signal. The Body Pack has a really nice clip on the back. I am so relieved to have it. After years of struggling with the incredible finicky G3 metal clip, this one feels great. The clip is attached with screws, so if you want to take it off, it’s fairly straightforward. It has a nice size and weight to it, and it’s easy to use. The keys are tactile and well-spaced out. The layout of the device makes it really easy to go through the menus. On the bottom of the device, you’ll find the USB-C port for charging. 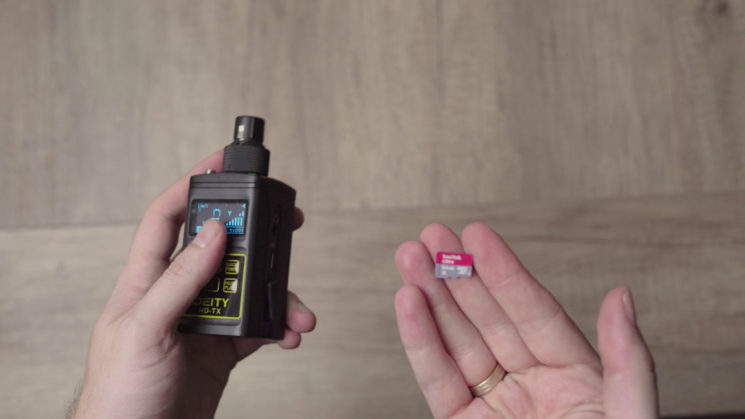 The HD-TX, or the transmitter cube, has a female XLR and a screwable 3.5mm jack. The XLR can provide 48v phantom power, which is awesome. The keys here are a little more bunched together. However, you also get a couple more features. The magic behind the transmitter cube is its ability to record internally. I don’t know of any other device that can simultaneously record and transmit in such a small package. One thing to note here is that this feature is locked in the US because of patent issues. You will find the micro SD port, another 3.5mm headphone jack (for monitoring), and a USB-C port for charging on the side of the device. 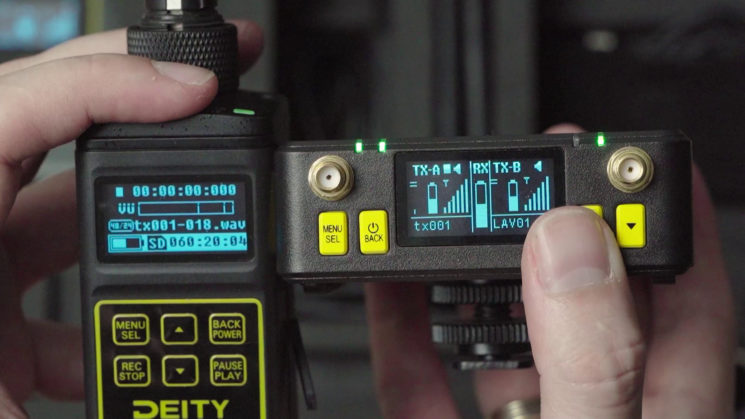 The most compelling part of this package, if you ask me, is the receiver. It’s a little bit big, but honestly, it accounts for two devices, so we’ll call it fair sized. On the front of the device, you will see the four control buttons. These buttons make it really easy to navigate the menu. On the other side, you’ll see two outputs in the form of 3.5mm jacks and a USB-C port for charging. You’ll find the indications for which channels are connected, the output method, signal strength, and battery on the screen. 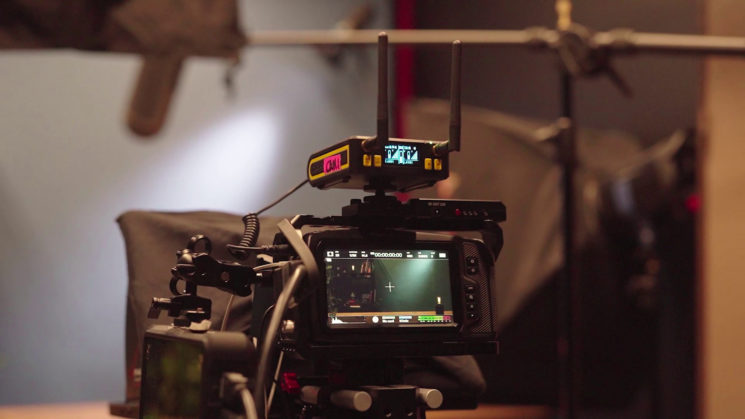 All of the devices share some pretty cool features. First of all, they all can be charged during use. This is really important when you look at rechargeable devices. Sometimes for whatever reason, you need the juice. I will say, though, that while the transmitters can transmit and charge at the same time just fine- the receiver died while charging. So just make sure your receiver is always good to go. All of the devices feature a bright OLED screen with large enough screens. You also have the ability to rename each device to whatever you want. This was helpful for me as it made monitoring audio clearer without thinking twice.

The receiver has the ability to adjust almost every function on the transmitters. It seriously is one of my favorite features. You don’t have to go to the device or talent to look at it and then go back to the receiver. Everything can be done from one spot. In fact, you can even start and stop recording from the Transmitter cube straight from the receiver. Lastly, the output methods. You have a variety of output methods. There is even one that is optimized for DSLRs (adequately named DSLR). This will give you a stereo recording of your left and right channels being each of the transmitters. So basically, you get two mono outputs in a single stereo channel. When you edit, you can simply duplicate the audio channel and use either side, and have two sources record internally to one source. 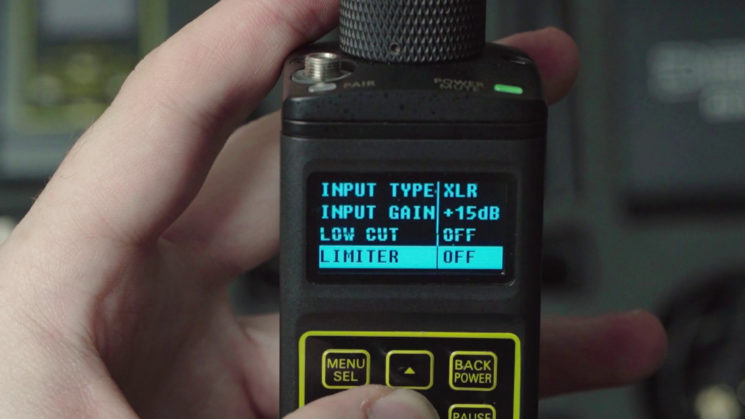 The transmitters share some cool features. My favorite is the analog limiter. This basically allows you to set your gain to the best of your abilities. Then if someone decides to be dramatic and start yelling, you have a good chance of saving your audio from being clipped. While you can change the mics’ gain directly from the receiver, the analog limiter does it for you… live. Another lifesaver is adaptive frequency hopping. Because of the drawbacks of 2.4ghz, the Deity system will consistently look for the best channel to connect to while transmitting. To be honest, on paper, it says that this is the reason for the “slight” delay. But in all of my projects that I did with it, I never had a sync issue. Lastly, you can adjust the transmission power to save on battery. It even has an Auto setting.

I’ll just say it. The battery is excellent. Like, really, really good. It always gets me through a day with no stress whatsoever on a full charge. But more importantly, if I needed I needed the charge, all of the devices have fast-charged. It takes about an hour and a half to full charge, but with the quick charge, you should be able to get a good hour and change from 15 min of charging. A full charge should get you through a 10 hour day easily, even at 100mw of power. 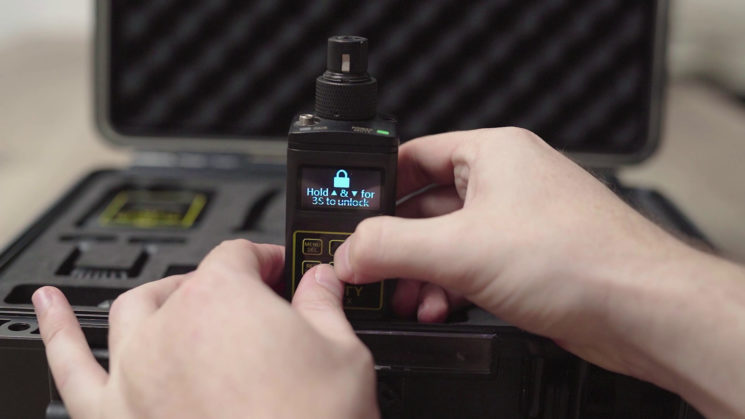 This is the saddest part of the review for me because I REALLY love this set. But there are definitely some things that I would want to change for V2. First, and honestly, my biggest turnoff: peaking. Why, why, why? If you have the screen and you have the level displaying, why not indicate peaking? The levels display really just indicates that it’s working. I wouldn’t trust these at all.

Next, the lock screen. One of the most tiring “features” of the devices is the locking… or rather, the unlocking. I’m all for a lock system, but there needs to be a more efficient way than the FULL three seconds it takes to unlock. If anything, the main reason it bothers me is that the bodypack is basically impossible to press with one hand. Maybe it’s just me because I’m used to the Sennheiser’s doors, but it seems like a less problematic solution to the same problem. At least let me configure how long to unlock. Seriously, three full seconds is too much.

Lastly, the bodypack. There’s nothing wrong with it. Except that in context with the transmitter cube, I can’t help but feel like it’s missing internal recording. My confidence in a 2.4ghz system would be through the roof if I knew my audio was safe no matter what. If both of the devices had the ability to record internally, I could also use them independently. I don’t know what the limitations are for something like this. However, having it as a feature in one and not the other seems like a missed opportunity.

All right, let’s talk money. 700 bucks. That’s not a little. It’s also not a lot.  For reference, the Sennheiser G4 goes for 600 bucks. And the transmitter cube and lav pack go for $800, but keep in mind you can’t use them simultaneously. Having a double channel receiver and two transmitters is an incredibly attractive offer. Even considering the drawbacks of VHF vs. UHF. In fact, if we break it down, people who plan on traveling (whenever we get back to doing that) would prefer a VHF system as it’s more globally accepted. Even the Rodelink wireless system will run you about 630 dollars for the same deal, but much less feature-packed, and not built as well.

Usually, what you make on the bananas you lose on the oranges. Here, you pretty much break even. For the first time, the prosumer audio market is given a high-value proposition. Feature-packed unique devices with an amazing build quality at an affordable price point. Are there other solutions? Yes. Is it as reliable as UHF transmissions? No. But the Deity Connect ($699.00) is definitely giving the industry a run for its money. This kit has all the bells and whistles that you can ask for and more. I gladly highly recommend checking out these mics before making your next wireless audio purchase.

« Micro Four Thirds is the most popular camera system in Japan claims OM Digital Solutions
Apple’s dongle-gate is coming to an end with new MacBook Pro; a report »