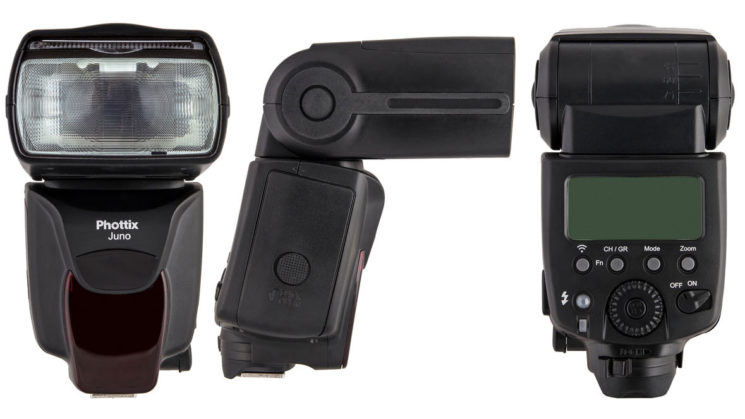 Juno has a guide number of 58 (fudged by zooming the head to 200mm), and goes as low as 1/128th power. It’s compatible with their “cutting edge” Ares II and Strato II flash triggers. Or, it can act as a transmitter itself, controlling other flashes.

Like pretty much all the other manual speedlights that don’t support HSS, it’s compatible with just about every brand of camera out there. These include, Canon, Nikon, Sony, Pentax, Panasonic, Fuji and Olympus (oh yes, they have a list). Other features include…

The Juno also includes the two now-standard optical slave modes; the traditional “see a flash and fire” mode, as well as the TTL pre-flash compatible mode. And it also has a PC Sync socket, allowing compatibility with older cameras and 3rd party trigger systems. 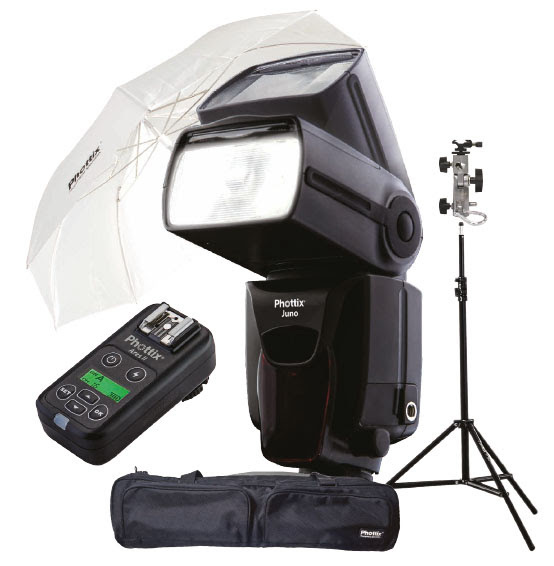 The flash is available alone, or in a new “Ready to Go” kit, which includes the Juno, an Ares II trigger, 72″ light stand, 36″ umbrella and a flash bracket, all packed into a 28″ bag.

Am I missing something? I’m failing to see the innovation, really. It feels like it’s being released about 7 or 8 years too late. It’s a basic manual flash, similar in spec to the Yongnuo YN560IV ($67). Except, the Juno ($140) is more than twice the price, but appears to offer nothing over the Yongnuo. Or, for about the same money as the YN560IV, you could get the Godox TT600 ($69), which offers everything the previously mentioned speedlights do, but also provides you with High Speed Sync.

If you’re a Phottix die hard, and you’ve already invested into their system, then the Juno may be worth picking up if you need a speedlight or two. But if you’ve not yet bought into a flash system, I’d say there are several other systems out there offering a lot more for less money.