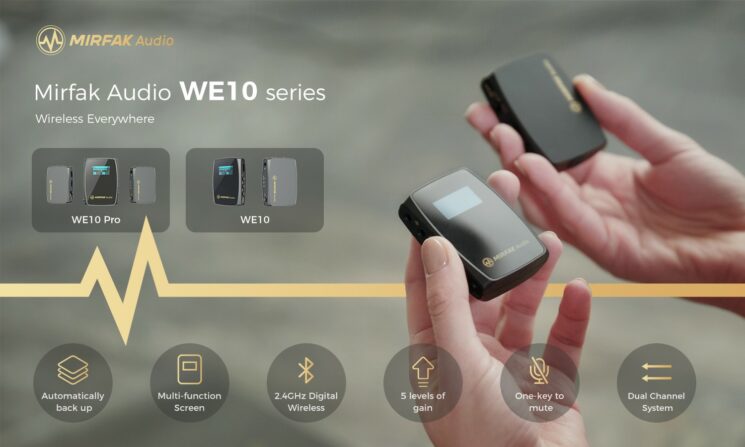 Gudsen, manufacturer of the popular Moza line of gimbals has been branching out into audio recently under the brand Mirfak. Their latest release, the Mirfak WE10 Pro is a wireless lav mic system operating at 2.4Ghz. The WE10 Pro comes with a pair of transmitters and a single receiver allowing you to go solo and record just yourself or a two-way conversation or interview with somebody else.

The Mirfak WE10 Pro is the follow up to the company’s single-transmitter version Mirfak WE10, released a couple of months ago. But they haven’t just doubled the number of transmitters. They’ve also almost doubled the battery life while keeping the charge time the same and more than doubled the wireless range, as well as improving the recording quality from MP3 to WAV.

The trend of recorders being built right into transmitters seems to have taken off quite a bit in the last year or so. With the (finally) recently released Deity BP-TRX, the original Deity Connect Interview Kit, the Mirfak WE10, the new Mirfak WE10 Pro and at least one more (that I can’t recommend) which I’ve tried personally, that’s at least five different wireless lav mic systems out there now that offer recording directly in the transmitter to an SD card.

Of course, the legalities of doing so aren’t all that clear everywhere. In much of the world, you’re just fine. In the USA, patent issues means that on some devices, the feature is not available – which is why Deity’s BP-TRX and other solutions only offer simultaneous recording and wireless transmission on the International version.

Mirfak hasn’t said whether recording and transmitting simultaneously is available on the Mirfak WE10 Pro or the original WE10 for users in the USA, but having tested the original WE10 on some live streams, it is most definitely available here in the UK. The quality of both the transmission and the internal recording isn’t too bad with an external mic, either.

« TTArtisan’s 17mm f/1.4 is a low-budget wide-angle lens for APS-C and MFT
Here is the biggest problem with photography competitions »