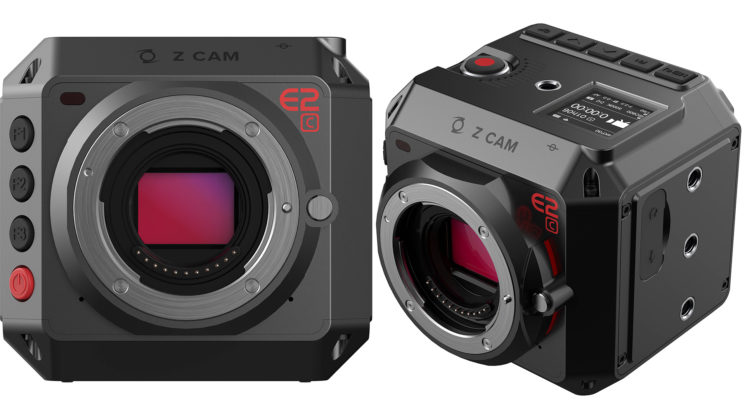 The Blackmagic Pocket Cinema Camera 4K made some pretty big waves when it was announced last year. And given its current high demand, there seems to be no shortage of customers for such a low budget camera. Especially one with such capability. So, it’s not much of a surprise that other manufacturers want to muscle in on that market.

Z-Cam is one such company. They’ve just announced their new E2C camera. A 4K cinema camera, which may very well be the smallest and least expensive on the market right now. And while it doesn’t shoot ProRes or raw video (yet?) it does look like a fairly impressive unit for the price.

Without a lens, the new camera weighs in at only 668g, and measures only 91.2 x 83.9 x 89.1mm. This means it’s small enough to put on a pretty lightweight gimbal or even attaching to a drone. Ok, you’d need something with a bit more beef than a Mavic Air, but you don’t need a Matrice 600.

Z-Cam says they are awaiting Apple certification in order to implement ProRes. There’s no mention of whether or not that also means ProRes RAW, too, but I would imagine not. That UHS-I SD card slot would probably struggle to be able to keep up with any kind of RAW codec unless it’s heavily compressed.

Even though you currently only get h.265, it doesn’t sound like a bad camera for the money, especially with that h.265 footage being 10-bit. I’d be interested to see some actual footage samples from it, though, to see how good it really is, and how cleanly it edits. Depending on the hardware and software in your editing machine, you might need to transcode to something a little more useful. And that’s an extra step that can be a major pain in the ass.

The UHS-I card slot is definitely somewhat disappointing. Sure, you can put a faster card in there in order to be able to unload faster, but the camera’s not going to be able to write to it any faster. The documentation so far doesn’t mention a bitrate, so, I guess we’ll have to see exactly how limited it is and how that affects the camera from a practical standpoint.

For audio, there is a 3.5mm audio jack, but there are no XLR inputs, so no phantom power. It does have stereo internal mics, too, although I  get the feeling you’re not going to be using the in-camera audio, no matter how you get it in there. So, it’s just going to be scratch audio for syncing up to your main, separate audio recording in post.

The Z-Cam E2C 4K Cinema Camera is available to pre-order now for a mere $799 and is expected to ship at the end of August.