Expressing the passing of time using photography as a medium has fascinated me ever since I became interested in using a camera to make art. A single photograph is usually made in a fraction of a second and we have learned to perceive photographs this way.

If we make photographs with a long exposure and our composition includes movement, (of either our subject or our camera,) we are recording an image our eyes will never see naturally. The duration of time our shutter is open will typically result in a blurred photo. 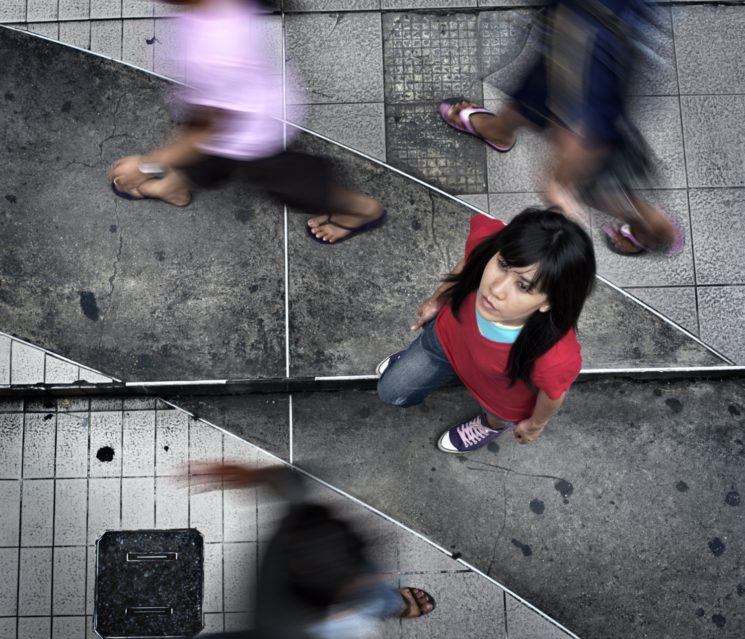 Shortly after buying my first camera, a wonderful old Nikkormat FTN with a 50mm f1.4 lens, back in the early 1980’s, I enrolled in a photography night class at the local high school. During the first lesson the teacher showed us a TV documentary about the British painter David Hockney who had recently started making photographic ‘joiners’ as he called them. I was hooked! Hockney only made his joiners for a few years before putting down his camera and returning to painting. I have enjoyed exploring and developing this style of photography off and on over the past 30+ years.

Creating multiple photographs and compiling them into a single montage enables me to explore and express the passing of time using photography as my medium, that I cannot do with a single photo. It also gives me the ability to manipulate not only our perceptions of time, but of space and perspective as well. With photographic montages, our perceptions of photography are challenged because we are no longer looking at an isolated 1/250th of a second made necessarily at one location.

Generally, when people create multiple photos to combine into a single image it’s because they don’t have a wide enough lens to capture a scene, so they stitch together a panorama of images which they’ve shot along a straight line. My great, great grandfather, Frederick Cooper, used this technique way back in 1889 when he produced a montage from five 8×10 inch negatives of the Tasman Glacier and Mount Cook range, some of the first photographs made of New Zealand’s highest peak. An image such as this does not convey an alternative space or time perception than what’s normal to us.

Whenever I set out to create a photo montage I consider how to illustrate the passing of time and/or how I can make my photos from different points of view to convey an altered sense of space. Very much as cubist painters do. This, of course, varies greatly depending on my subject matter and location. Sometimes I will photograph a montage making all the images from one perspective, at other times I will change my position, left, right, up or down, to create a series oh photographs that cannot possibly fit together to make a ‘normal’ looking image.

Making a montage of the Iron Bridge in Chiang Mai, Thailand, I wanted to use as few images as I could, (sometimes I make montages with hundreds!) This montage consists of only seven photos which have been shot from three different positions. First I started to the right of the bridge and made photos of the river and bridge. Then I moved across to the left of the bridge and made a series of that side. I then stood on the sidewalk in front and made the photos of the road and opening of the bridge. In all, I shot 74 photographs during half an hour. The compositions which include the sky were made in the first 15 minutes, because in Chiang Mai we only have a short window of time each evening where the light balance is good. I spent 15 minutes and 24 photos on the front of the bridge and ended up using only one of those photos. I knew the center of the image where I needed to make the two sides meet would be the most challenging aspect of this montage.

Photographing a montage and later when compiling the photos, I am always looking to keep a visual flow happening. If the result is too disjointed viewing the montage will not be enjoyable. Connecting the two halves of the bridge at the center was vital to make this montage work well. Because I wanted to use minimal photos, this was a challenge. Having the strong lines of the street, Handrails and the top of the bridge holds it all together, despite the radically different perspectives happening in the montage. 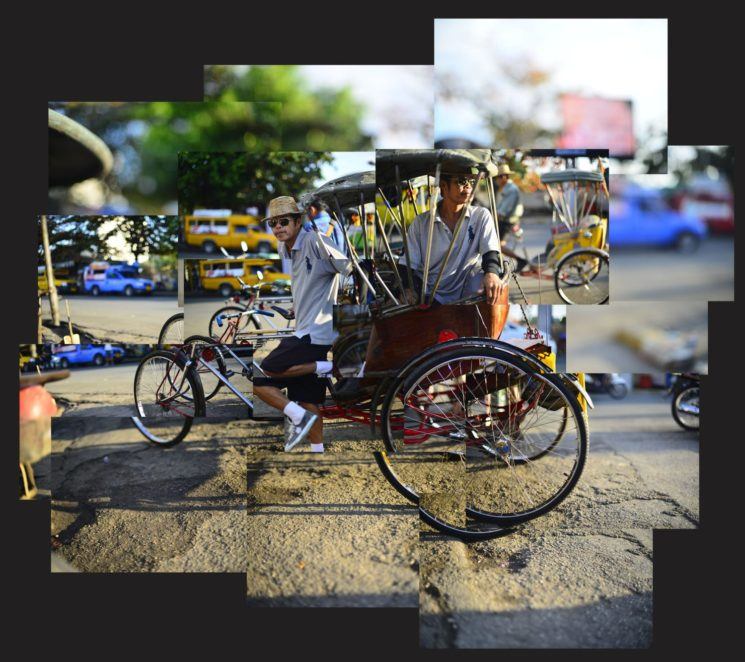 Keeping the basic shape of the samloor (tricycle taxi) intact helps keep this montage together. However, I wanted to create it somewhat disjointed to convey a feeling of motion in the cycle. The movement of the rider as he shifts from his position, seated enjoying the morning sun, to hopping down onto the pavement, imparts to the viewer the passing of time. His left leg in different positions in the two images where it’s visible, and his right foot being hidden behind another photo add the sense of kinetics to the montage.

As always in photography, it’s essential to anticipate when the action will happen so you can capture the right moment. Making montages which incorporate action, anticipating and capturing the action is even more vital. It’s best to be able to show the continuance of the movement giving the finished picture an overall flow.

Utilizing different camera techniques is something I experiment with frequently in my photo montages. In the samloor montage I have changed my aperture settings to vary how the background looks and to help isolate my main subject. Notice how much more out of focus the traffic is at the right of the picture compared to the traffic on the left – this was deliberate. When David Hockney started making his joiners he used a Polaroid camera. Basically, a point and shoot that provided instant photos. When he moved on to use a 35mm camera it appears he continued to use it much like a point and shoot. His pictures are generally devoid of any creative photographic technique, which I guess stems from his overall contempt for photography as an art form, (openly discussed in his published conversations with Paul Joyce.)

Digital cameras and computers have made the process of creating montages much less complicated. Using my camera’s monitor to see the sequence of images and ascertain if there are any gaps makes a huge difference when I am making the photos. Using Photoshop to lay the photos out, layer and arrange them gives me far more flexibility than juggling piles of prints. Once the digital layout is complete I do still get photographs printed and physically paste them up onto a backing board for framing. The textured overlapping of the photos brings an added depth which is a little rare these days when most of the time we view photography on flat monitors.

With the ongoing development of digital camera technology, I have continued to press into new fields exploring time and space with my montages. For the past few years, I have been creating montages with a mixture of still images and video. The combination of media and how to incorporate them into single artworks challenges me to explore new dimensions.

This video shows some of the process that goes into creating these montages, along with how they enable a different way of storytelling.

Kevin Landwer-Johan is a photographer, photography teacher and film maker. Originally from New Zealand he has been based in Chiang Mai, Thailand, sine 2002. You can see more of what he does on his websites photo workshops online, youtube, Facebook, and Flickr.

Stop making these seven mistakes when using a wide-angle lens for landscape photography
« Photographer captures illegal mammoth tusk hunting in a striking photo series
Flickr is on its way out, what are your alternatives? »