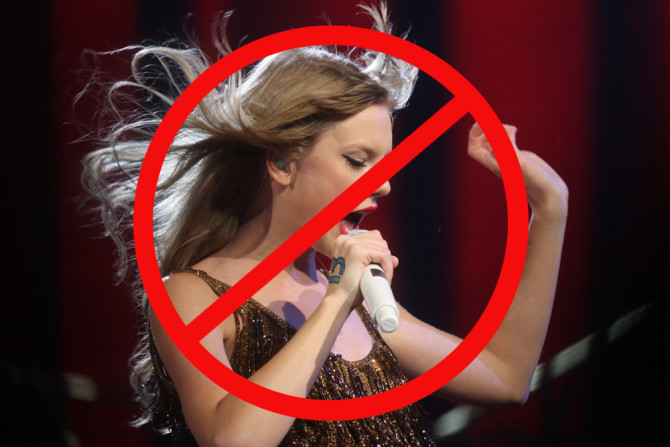 It seems like Taylor Swift has had a spot reserved for her in the headlines lately. First it was positive press for standing up to Apple’s music streaming service and defending artists’ rights, but then came along a concert photographer calling the singer a hypocrite for exploiting photographers that cover her concerts.

Making valid points and drawing attention to a touchy subject for photographers, Jason Sheldon got people talking about the problem, but it was just talk.

Today, however, that changed when the Irish Times covered Swift’s Dublin concert but didn’t include any photos of her performance. Taking it a step further, the news outlet also posted an article on its website explaining that the star’s contract didn’t leave them another option.

When one of the most successful singers in the world comes to town for two sold-out concerts you’d expect to see newspapers and other media outlets full of gushing coverage.

True to form, Swift’s Dublin concert last night attracted the media and got plenty of coverage in today’s papers. The Irish Times, the country’s most popular daily non-tabloid newspaper, ran two articles about the show.

The first was the expected coverage of the concert, with the second one explaining why the earlier one only included photos of the fans before the concert began.

The Irish Times cites the singer’s insistence that photographers sign restricting contracts as far as what they can and can’t do with photos of Swift, and goes on to mention that the live music industry has adopted the use of such contracts in recent years.

But, says the Irish Times, Swift’s contract specifically includes a few “onerous restrictions”. For those who haven’t been in the loop these restrictions are a “one-time-only” publishing clause, the need for written consent from the singer or her agent for any other use and the fact that Swift’s management company gets the “perpetual, worldwide right” to use the photos from the concert for publicity and promotions. Free of charge, of course.

“The terms and conditions of the contract are exceedingly restrictive and just not feasible for a working newspaper and website,” said Brenda Fitzsimons, The Irish Times deputy picture editor.

Nothing personal against Swift, but hopefully this is the beginning of a long list of media outlets that will refrain from photographing her concerts under the current contract.

Swift is not the only artist with a restricting photo authorization contract, and who knows it might not even be the worst one out there, but when Swift so eagerly took upon herself the role of defending artists’ rights against Apple she became the face of a battle of a wider scope than she cared for.

People aren’t only looking at the musicians, songwriters and producers she had in mind. They’re now also looking at the photographers being used by the very same people crying out for help.

Don’t get me wrong, I fully support Swift’s message to Apple and agree that artists shouldn’t have to work for free, nor should Apple employees as she mentioned. That being said, Swift needs to remember that the Golden Rule applies not only when you’re the victim but also when you’re the bully.

[Lead image based on: Eva Rinaldi]