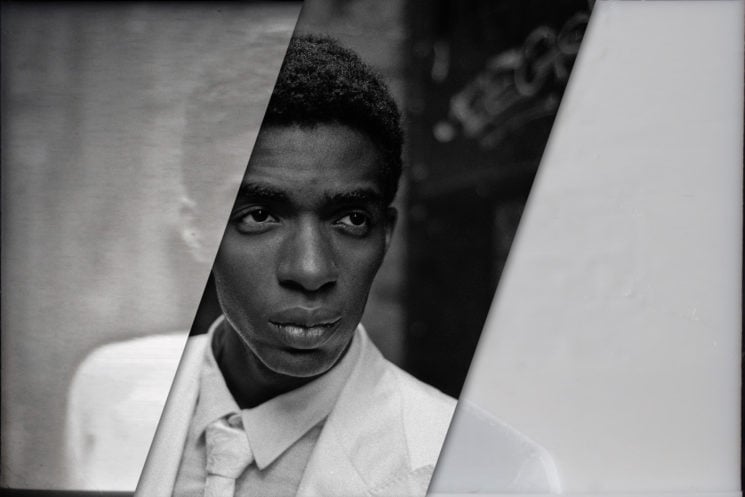 When I was first told “Hey, you should 3D print some of your photos” a couple of years, I thought they were mad. 3D print a photo? Then I did a little digging and found out that you can actually 3D print photographs. Sort of.

They’re called lithophanes, a pretty old technique that’s been around since the early 1800s. Of course, they didn’t have 3D printers back then, they made them out of porcelain. These days, though, we do, which makes them much easier to create. So, I finally got around to making some.

So, what is a lithophane?

Put simply, lithophanes are a way of displaying an image by backlighting a piece of somewhat translucent material. An image then appears, based on the thickness of that material. It’s essentially a relief, but not in the traditional sense like you might see with a public figure’s head on a coin. Here the goal is not to simulate a 3D effect. The heights of different parts of the relief are based on the lightness or darkness of those parts of the image.

Then, when you shine a light from behind it, the thinner parts are brighter and the thicker parts are darker.

Here, have a look at this example. The “Before” picture is how the 3D printed lithophane looks when just lit by a normal light in front of it. Kinda weird, huh? Doesn’t really look much like a photograph at all, does it? The “After” picture shows how it looks when a light is placed behind it. 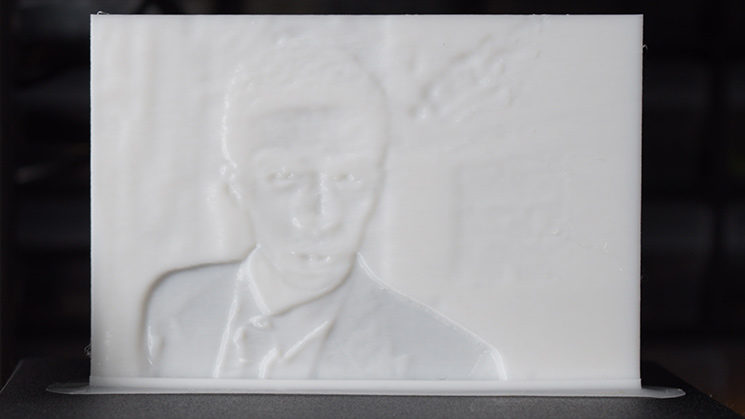 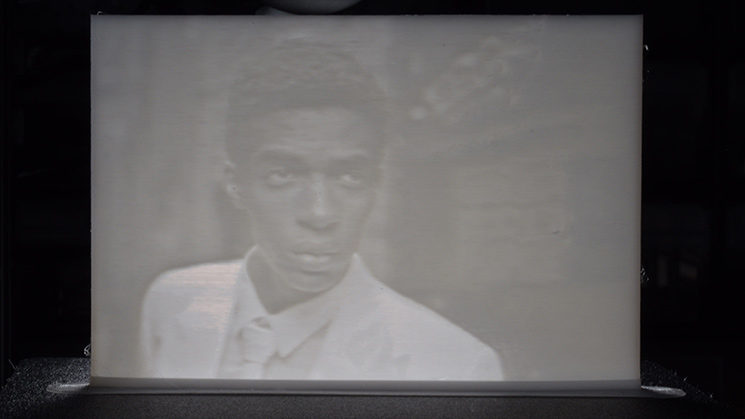 How do you make them?

I own several 3D printers and any one of them would’ve been good for experimenting with lithophanes. But until the Snapmaker arrived on my doorstep, I didn’t have any white filament. I wasn’t going to buy a roll just to satisfy my curiosity, but the Snapmaker came with a roll of white PLA filament included in the box. I had no other use for it, so I figured why not? 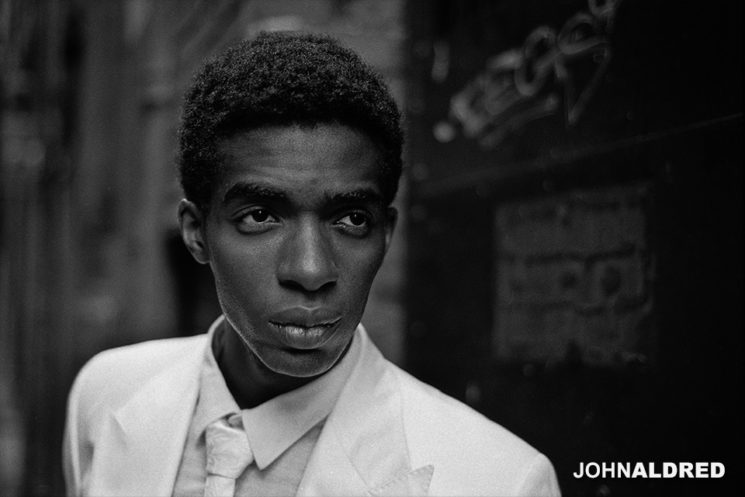 The first part of the process begins, at least for me, on the web, on a website called Image to Lithophane. Here you’re able to upload an image and converted into a 3D model of a lithophane based on several different options – flat, curved, cylindrical, spherical, etc. 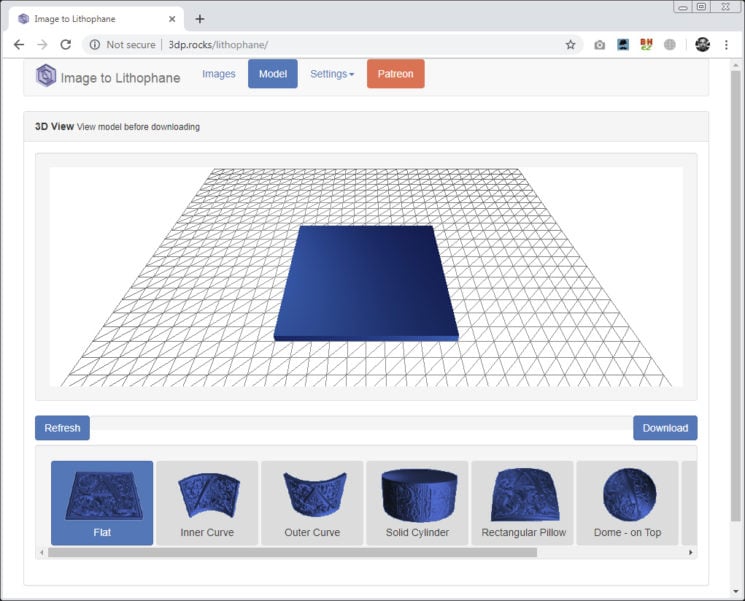 After loading your photograph into the site, which can just drag and drop straight into the browser, you’re faced with a 3D model. It will require some tweaking to give you the size you want. I printed these at 100mm wide, 4mm thick with a 10mm base. This 4mm thickness gives some good contrast when you backlight it (at least to your eye, the camera doesn’t pick it up that well) and a good base to allow them to sit on my desk.

The photograph after uploading to the Image to Lithophane converter website.

With 3D printers, models need to be run through an application called a slider. This slices (hence the name) the model up into layers, as that’s how 3D printers work, by building an object one layer at a time. The thinner your layers, the more detail you get in the final model. 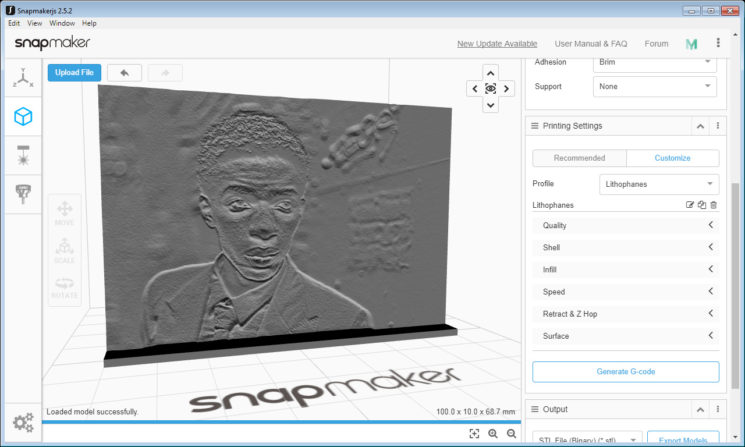 The 3D model inside the Snapmakerjs slicing software. 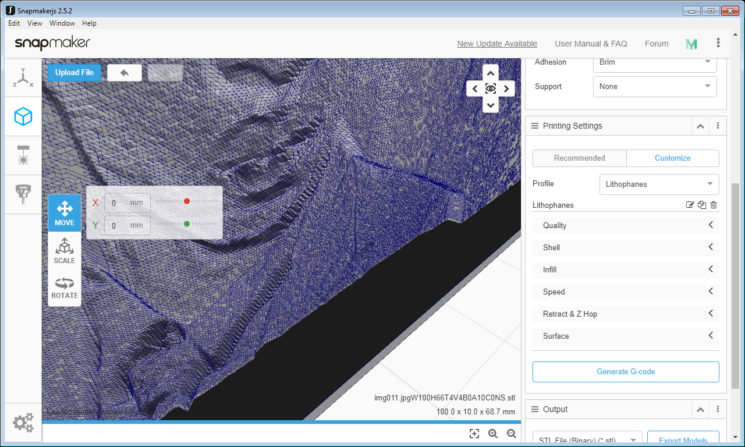 With the mesh, it’s easy to see the different thicknesses of different parts of the image. These translate into different brightness levels, with the thinner parts being brighter than the thicker parts when backlit.

As mentioned, I used the Snapmaker to print these lithophanes, which comes with its own slicing software, Snapmakerjs. This is what’s in the screenshots above, but you can use Cura, Slic3r, Simplify3D or whatever slicing software you’re most comfortable with.

With Snapmakerjs, the default profile was pretty good as it was for this printer (after all, they’re both made by the same company), but I did change a few of the settings. I went with a 0.2mm layer height, which isn’t the thinnest that the Snapmaker or other 3D printers can go, but it’s a good compromise between quality and the time it takes to print the lithophanes at this size (I’m impatient).

Once your settings are dialled in, just tell it to print. 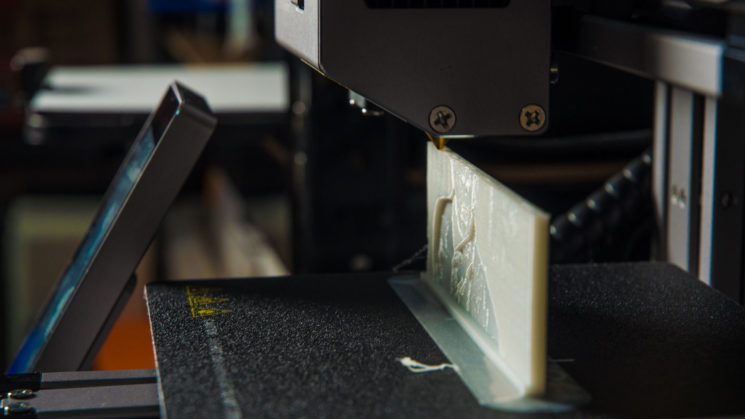 Printing a lithophane with the Snapmaker

Normally, when you 3D print a model, you print a shell (the “wall”) which is filled in with “infill”. Infill is mostly air, usually, with just enough filament being laid down to provide some added structure for your part to reinforce the walls. Here’s an example of a model with infill that helps to understand why printers usually print this way. It saves a lot of material. 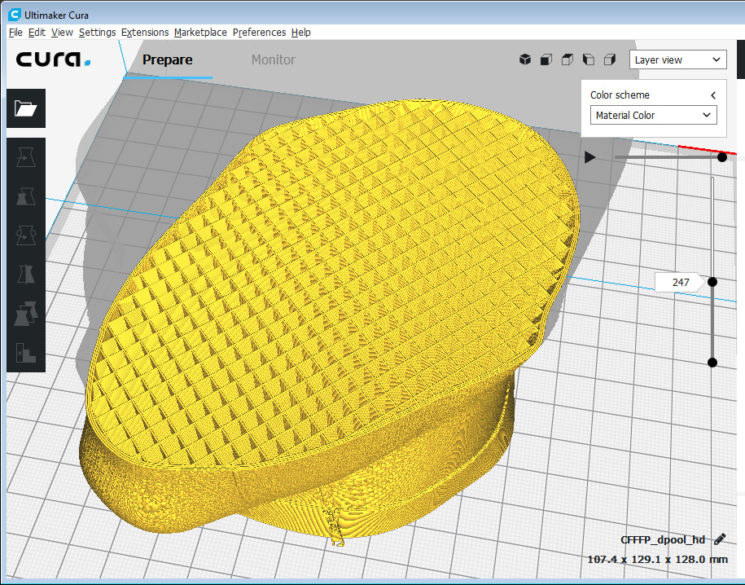 A 3D model sliced to offer 10% infill. This means 90% of the inside of the model is just pure air. This is fine for most models as you still get structural strength but don’t waste a lot of material. Not what we want for lithophanes, though.

With lithophanes, though, we don’t want normal infill. We want it to be a solid piece all the way through so that we get the contrast we expect when we backlight the final print. With the thickest part of this model (the base) being 10mm, this means we need at least 5mm wall thickness to force the printer to make a solid part. So, the wall thickness was changed to 5mm.

Those are the only settings I needed to change in Snapmakerjs for the Snapmaker printer, but you’ll need to do some experimenting with your own printer and slicing software to determine the best settings. But after your settings are dialled in, simply slice the model, which results in a .gcode file, and then send that to your printer.

Here are the other two lithophanes I printed. 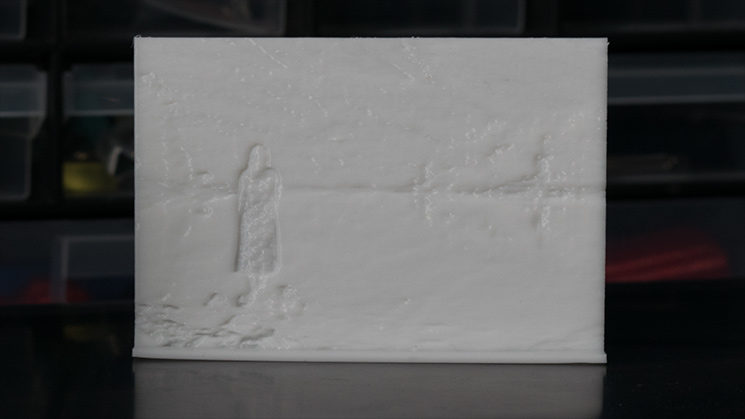 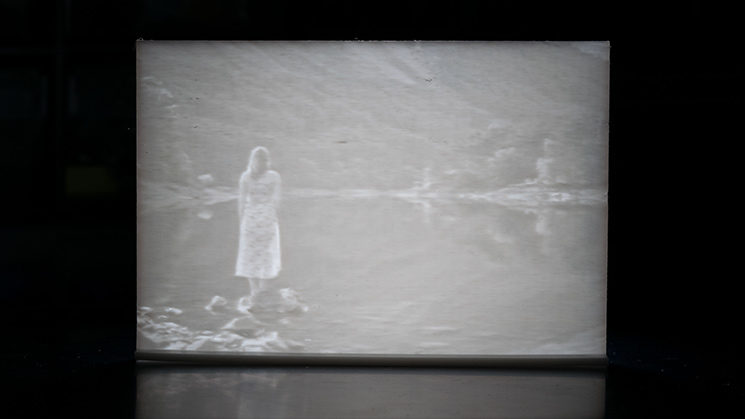 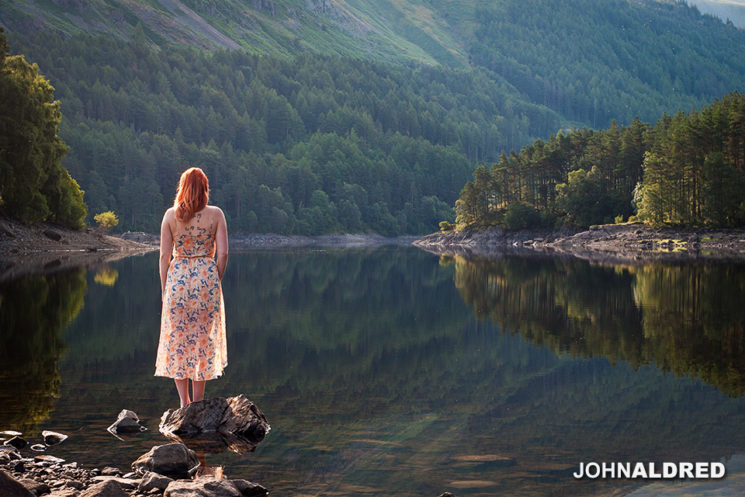 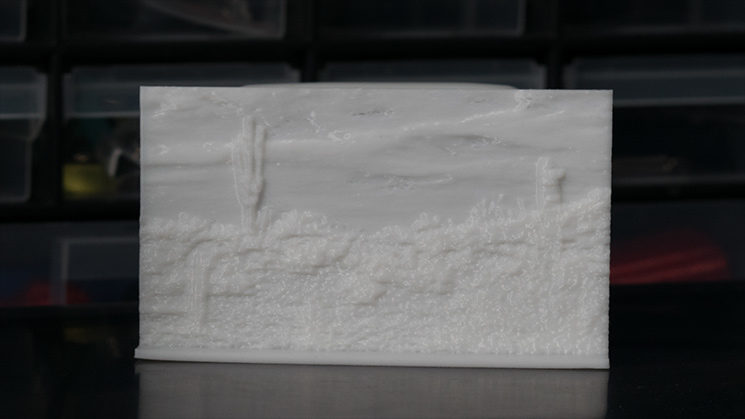 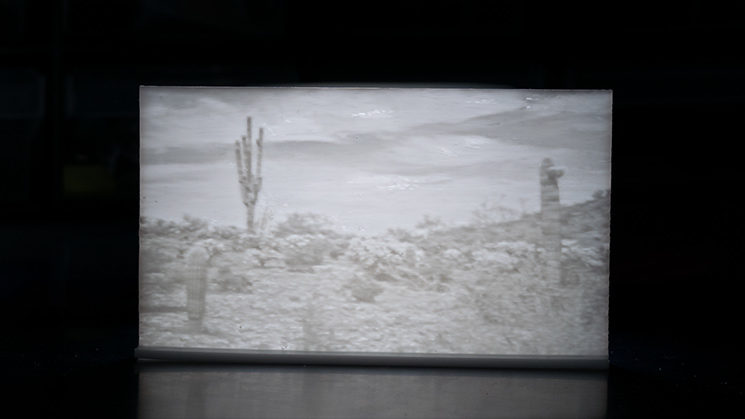 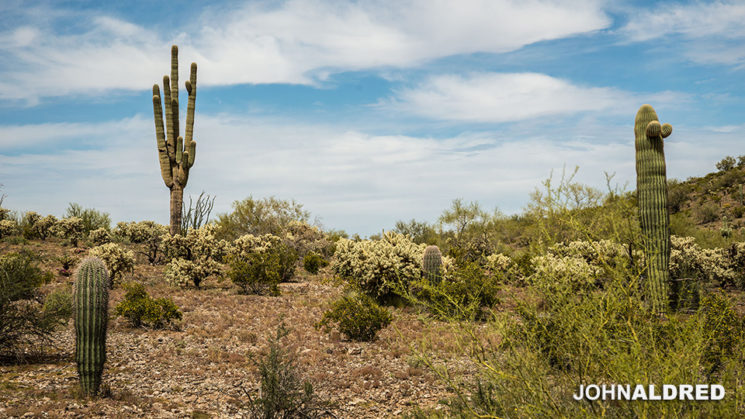 You’ll typically want to print lithophanes using white filament, as I have done here. You can use other colours, although you may not get the results you expect. Different colours offer different levels of translucency, so the contrast probably won’t be the same as printing with white when backlit. It might be too transparent or too opaque to really show the image. With white, though, especially white PLA, you’ll usually get the best results.

Some people have had great experience with painting the rear side of the lithophane and letting some colour shine through. I’m not entirely sure what types of paint they used, as this isn’t something I’ve tried myself, but be careful that whatever you use isn’t too opaque, or the light simply won’t pass through anymore. And you probably won’t want to use primer, as that can also turn the back of the model opaque, preventing the backlight from shining through.

Printing lithophanes is something I’ve wanted to do since I first learned they could be done. For now, though, my lithophane curiosity has been satisfied. I’m happy with the small ones I’ve printed, but it’s definitely something I plan to revisit in the future.

The original snapmaker has been fun to play with so far, though. As well as a 3D printer, it’s also a CNC machine and a laser engraver, and I have some photography related projects in mind for those features, too, so I’ll be putting up some content about those on my YouTube channel, and probably on here, too.

Snapmaker has now officially announced the Snapmaker 2, with the Kickstarter going live today. There are three models of Snapmaker 2 offering larger build areas than the original with a bunch of new features. The campaign prices offer up to 50% off for early birds, too.

Have you tried printing lithophanes yet? Let’s see some of yours in the comments.

Poll: Do You Print Photographs Any More?

« How to make a quality DIY video light using LED strips and a cake pan for only $40
The Laowa 100mm f/2.8 Super Macro lens offers a 2:1 magnification ratio for extreme close ups »