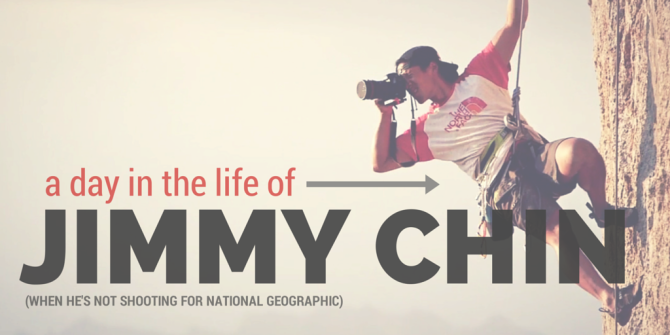 If you’ve always suspected that National Geographic photographers have awesome lives, this interview with Jimmy Chin might help prove your case. A team from Mashable traveled to Jackson, Wyoming to visit the NatGeo photographer in his home, offering us a glimpse into the adventurers’ paradise that is Chin’s storage and supplies room. (Holy cow does he have a lot of cool stuff.) It’s also kind of fun to see what Chin does in his downtime when he’s not skiing Everest or climbing Shark’s Fin on Mount Meru. Granted, he doesn’t get very much downtime with adventures of those proportions to partake in. Even when he is able to take a “break” from work, it seems as though Chin is always up to something epic. Seriously, the man is beast.

Though Chin is living the dream now, it wasn’t always so easy for the photographer. He explained to Mashable that his parents were not very supportive of Chin’s interests in climbing and photography, as they preferred he focused his studies on more traditional ventures such as in the medical or law fields. In fact, Chin lived out of his car for seven years after he graduated from Carleton College in Minnesota, USA. During this time he self funded three separate trips to climb Karakoram (Pakistan).

It was the photographs Chin took during those outings to Karakoram that got him discovered by North Face mountaineer Conrad Anker. Chin is now sponsored by North Face. Looks like a little determination really does pay off.