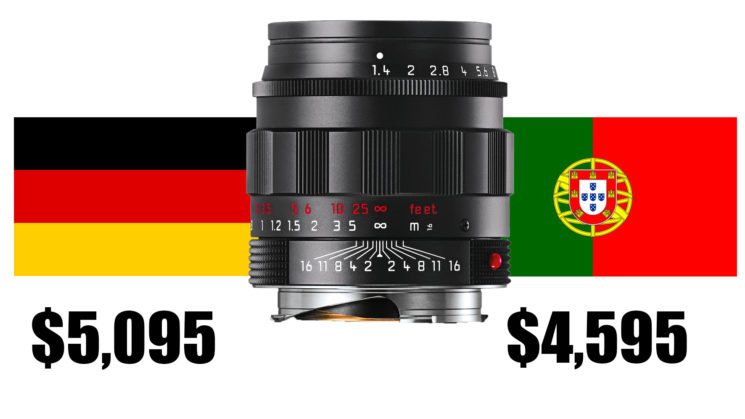 Leica has just relaunched nine M-mount lenses we’ve already been familiar with. But this time, they’re cheaper. The thing is that they were made in Portugal instead of Germany, but according to Leica – they keep the same high-quality performance. Still, they are up to $500 cheaper than their German counterparts.

Here are the prices of the upcoming Leica lenses made in Portugal:

For comparison, here are the prices of their counterparts made in Germany

Leica claims that a cheaper price doesn’t mean lower quality. In fact, all lenses made in Portugal feature the same design, construction tolerances, and pristine quality as Leica lenses made in Germany. Even the warranty policy is completely the same. But the thing is that they will be available at a lower price to photographers in the USA.

According to Red Dot Forum, the motivation behind this move is pretty clear. “Last year, the US Trade Representative imposed a 25% tariff on a wide range of European goods, including German-made optics,” this source notes. Leica initially increased price a bit to try and cover for the additional expense, but it was a financial burden for its customers. To resolve this, the company reportedly created a new production line in its existing Portugal facility.

Leica will start shipping “Made in Portugal” models between August and December 2020. All of them are now ready for preorders (I’ve linked them above). But if you’d still prefer a Germany-made version, keep in mind that they will still remain available in the USA and coexist in peace with their cousins from Portugal.