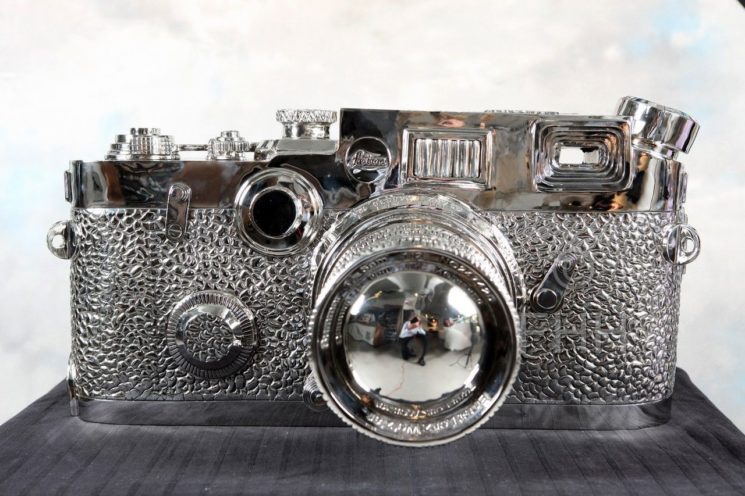 I guess most of us expect the items with Leica’s logo to be expensive. But this “fake Leica” that doesn’t even take photos will surprise you with its price tag. It’s a stainless steel sculpture, a mash-up of several Leica models. It’s made by Chinese artist Liao Yibai and reaches whopping $99,995.

Netherlands-based camera store Leica Store Lisse posted a listing of this pricey “Fake Leica” on eBay. They note that it’s a “very rare and sold out edition” of the sculpture. It weighs about 40kg and it’s made out of stainless steel. It’s heavy, but it’s actually a smaller replica of an even larger sculpture. Liao Yibai created a huge, 350kg “Fake Leica,” also out of stainless steel.

According to Leica Rumors, the sculpture was based on several camera models, hence the name “Fake Leica.” The body is based on Leica M6 and M7, with some M9 design pieces on the back (LCD screen). The lens is a Summicron 50mm 1:2, 1953-1960 style. The amount of detail is striking and the sculpture looks truly wonderful, I must admit. But it still doesn’t take photos.

As Leica Store Lisse writes, the “Fake Leica” they’re selling is “your last chance to obtain a very rare art-piece which you’ll not see offered on e-Bay anymore once it has been sold.” A similar piece was sold at in November 2013 at Westlicht Auction for 96,000 euros (over $115,600). So, the last remaining one is actually a bargain.