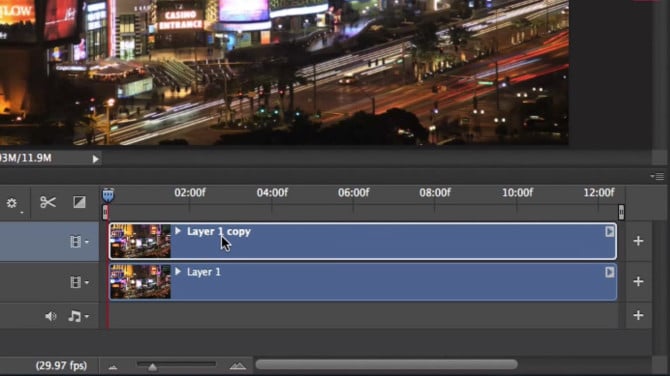 Make moving photos in minutes with this quick tutorial.

Have some cool b-roll laying around that you’ve been wanting to something with? In this sweet, but short video tutorial by Howard Pinsky, we learn how to turn video footage into a cinemagraph or “moving photo” fairly easily using Adobe Photoshop.

In Pinsky’s example, he has footage of traffic moving down a busy road that’s full of bright, flashing signs and advertisements. To make the  signage less distracting, Pinsky uses a mask to “freeze” the blinking lights, resulting in an image in which only the movement of the cars is visible. Take a look at the video, then read on for a breakdown of the steps.

This is a fairly straightforward approach that begins after you drag your video file into Photoshop. Make sure the Timeline pops up on the bottom of the screen. If it doesn’t click Window > Timeline and you should be good to go.

That’s all there is to it. Of course, there are also several iOS and Android apps that can do this for you, but if you prefer working in a desktop environment this is a pretty simple way to do it.

How to create a cinemagraph in Photoshop

Learn 18 wedding and engagement poses in under two minutes

« Photographer Melts The Face Off His GoPro In A Volcano; Luckily The Drone Survives
The Mamiya Hero 3+ Is a Gopro Hero Retrofitted in a Mamiya Ruby »